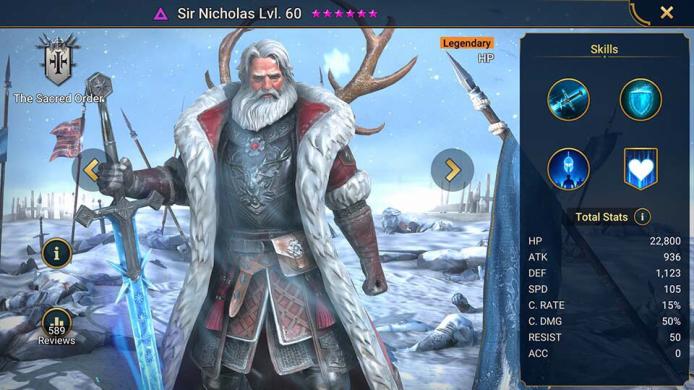 Sir Nicholas is a Void affinity legendary champion from the Sacred Order faction. Sir Nicholas themed for Christmas was the original fusion champion in Raid: Shadow Legends first year. He was obtainable with farmable champions and remains one of the best HP based champions in the game.
Sir Nicholas has the highest base multipliers of any HP based champion who does an AOE attack and paired with his ability to generate shields based on the damage his A2 hits for means he becomes one of the best champions in the game for Spider 20!
Sir Nicholas is strong in every area of the game, used for Unkillable teams on Clan Boss, Faction Wars end game teams due to his damage and Unkillable buffs and capable of carrying teams though any Dungeons or the Arena.

Overall, Sir Nicholas is one of the best champion in Raid: Shadow Legends.

Places an Unkillable buff and a 15% Continuous Heal buff on all allies for 2 turns.
Level 2: Cooldown -1
Level 3: Cooldown -1

Increases Ally HP in all battles by 33%