How to Gear Ultimate Deathknight in Raid Shadow Legends

How to Gear Ultimate Deathknight in Raid Shadow Legends

Today is the day! We have our hands on Ultimate Deathknight and can finally playtest where and how he can be utilized on our accounts.

Unfortunately, as it stands, he won’t see a massive amount of use in the endgame, but the same cannot be said for new or progressing accounts who are working their way through areas of the game.

So, today we’re going to take a look at different ways that you could build your Ultimate Deathknight and how effective they may be.

First of all, we’ll take a look at his damage potential, based on Hellhades’ Damage Test with all relevant buffs in Dragon – Ultimate Deathknight in solid Savage gear was capable of clearing waves hitting over 250k on all enemies with his A2, however, the gear requirements for this are very high as you’ll see below. 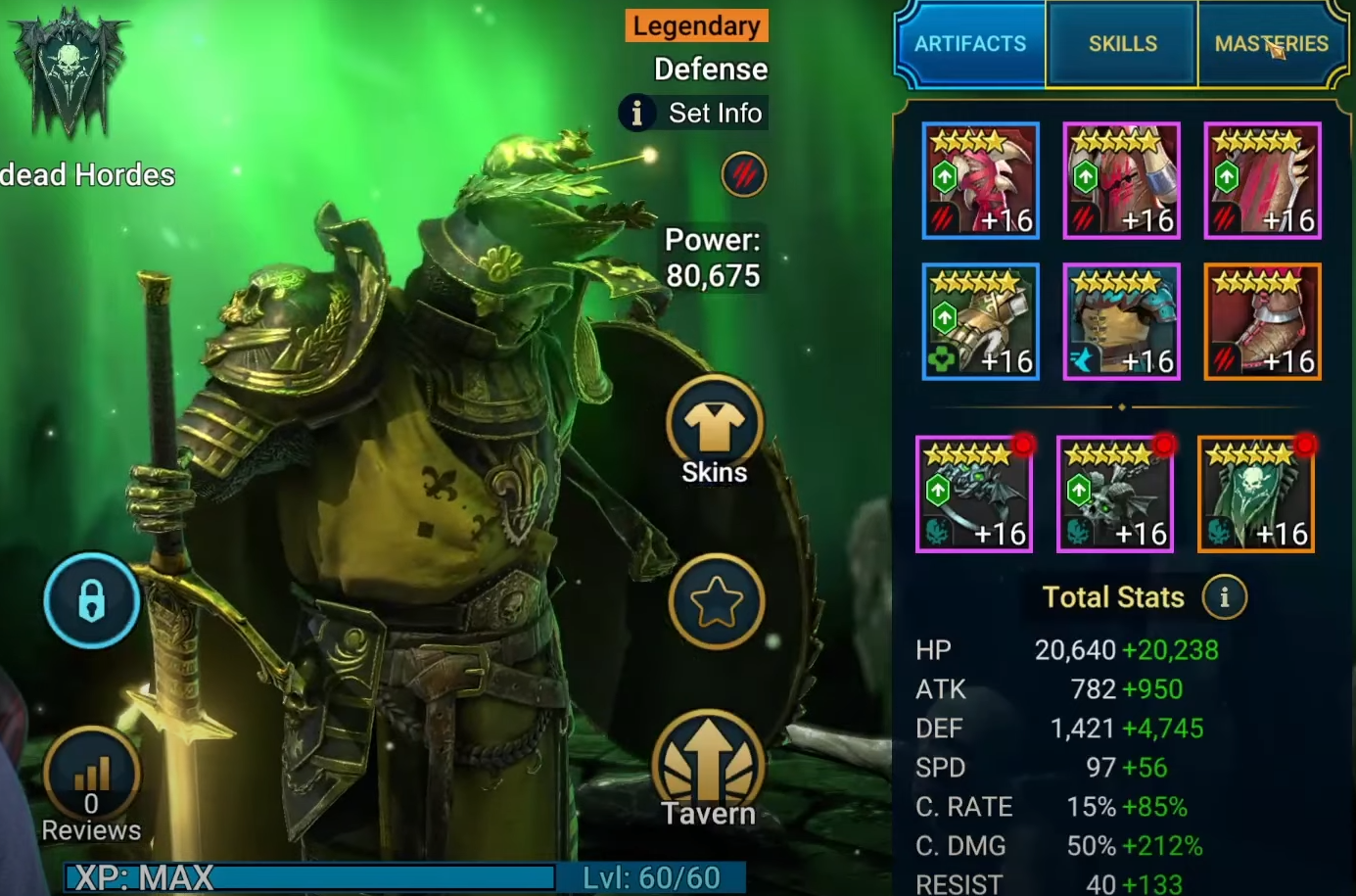 However, it is worth noting that Ultimate Deathknight IS a top 20 Defense based nuker, but it may not be the most optimal way of building him.

For this one Hellhades took to his Free to play account to make it more relatable for the community since the gear requirements for builds on his main account are hard to replicate for a large portion of the player base – and this is where he shines.

When booking Ultimate Deathknight you only care for his A2 and A3 as the benefit of booking his A1 is not very important – his main job will be to use Decrease ATK and provide shields and heals for your team.

Considering we were given Regeneration gear for the daily login rewards while collecting our Ultimate Deathknight many people will have access to a decent set of this with any luck at all, and it is a great choice when gearing him.

When it comes to stat requirements, you want to aim for the following:

Now that we’ve covered HOW to build him for this type of build, let’s take a look at how he performs in specific areas, starting with Ice Golem 20 – A stage that actually Hellhades had not cleared with his Free to Play account yet.

Ice Golem is known for hitting incredibly hard if you’re not careful, as he ignores defense while his adds are alive and triggering his big hit with them still active can be lethal – usually, you can negate this by using poison damage as they do not trigger his big hit.

Ultimate Deathknight was successfully able to protect the team and mitigate damage from the stage allowing a successful Stage 20 Clear, as well as clearing further ahead – proving to be a great addition for an early progression team for Ice Golem.

This will work similarly in Dragon, however less impactful as the Dragon does not hit as much as Ice Golem and is generally easier to survive!

Finally, for this build we’ll take a look at Spider, because of Ultimate Deathknight passive ability to transfer single target damage to himself is incredible, because regardless of who you use as the tank to soak the damage, it can be mitigated onto him allowing you to build him very tanky and worry less about your other team members dropping as you can 100% predict where the damage will be going. Of course, you will need a team that can actually take down the Spider along with him to clear stages, but he will be a huge help for progression!

Side note – if Ultimate Deathknight is a positive affinity for the stage, he will transfer some of the hits to him as weak hits too! Even if they are strong hits against the original target! 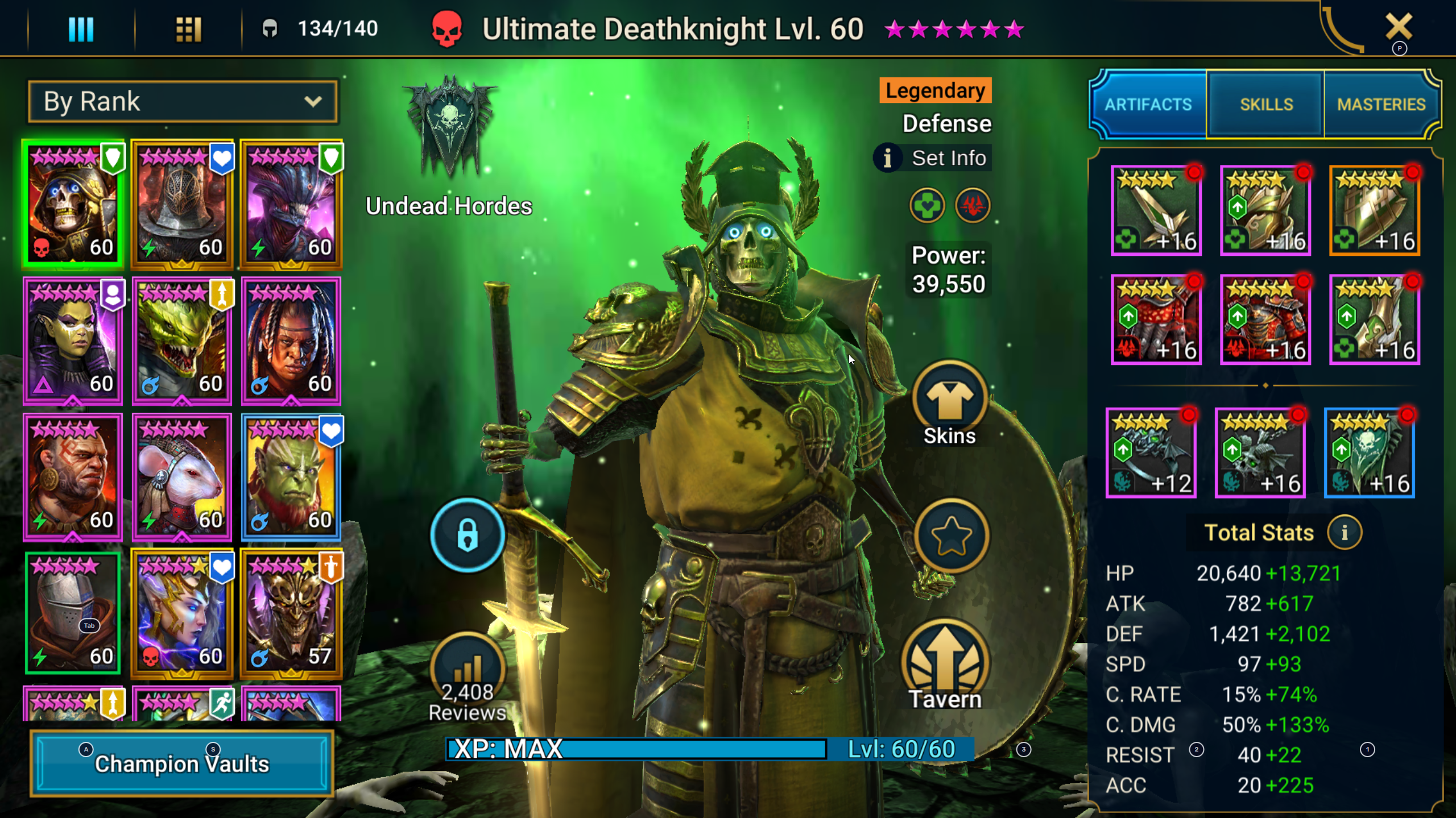 You heard it right! Ultimate Deathknight joins the ranks of Champions who are able to SOLO the highest possible stage Ice Golem and Dragon, allowing you to rank up food whilst farming gear!

Usually, when it comes to soloing dungeons you expect to see Champions in Regeneration gear, however that’s not the case with Ultimate Deathknight – because of his healing on his A3 he does not need to rely on the healing from Regen gear to stay alive, instead allowing you to push into Toxic gear to increase his damage output – which enables you to farm both Dragon AND Ice Golem completely alone.

For this build you do not need to focus on damage stats at all – all of your priorities can go into ensuring you place your Decrease ATK and stay alive – whilst also adding in resistance to not get debuffed by the enemies.

These runs are not the fastest, with roughly 9 minutes on Ice Golem, and 6:30 in Dragon – of course, this could vary depending on your luck from Toxic set, this could also be sped up with Revenge accessories as the counterattacks would be able to place poisons too! 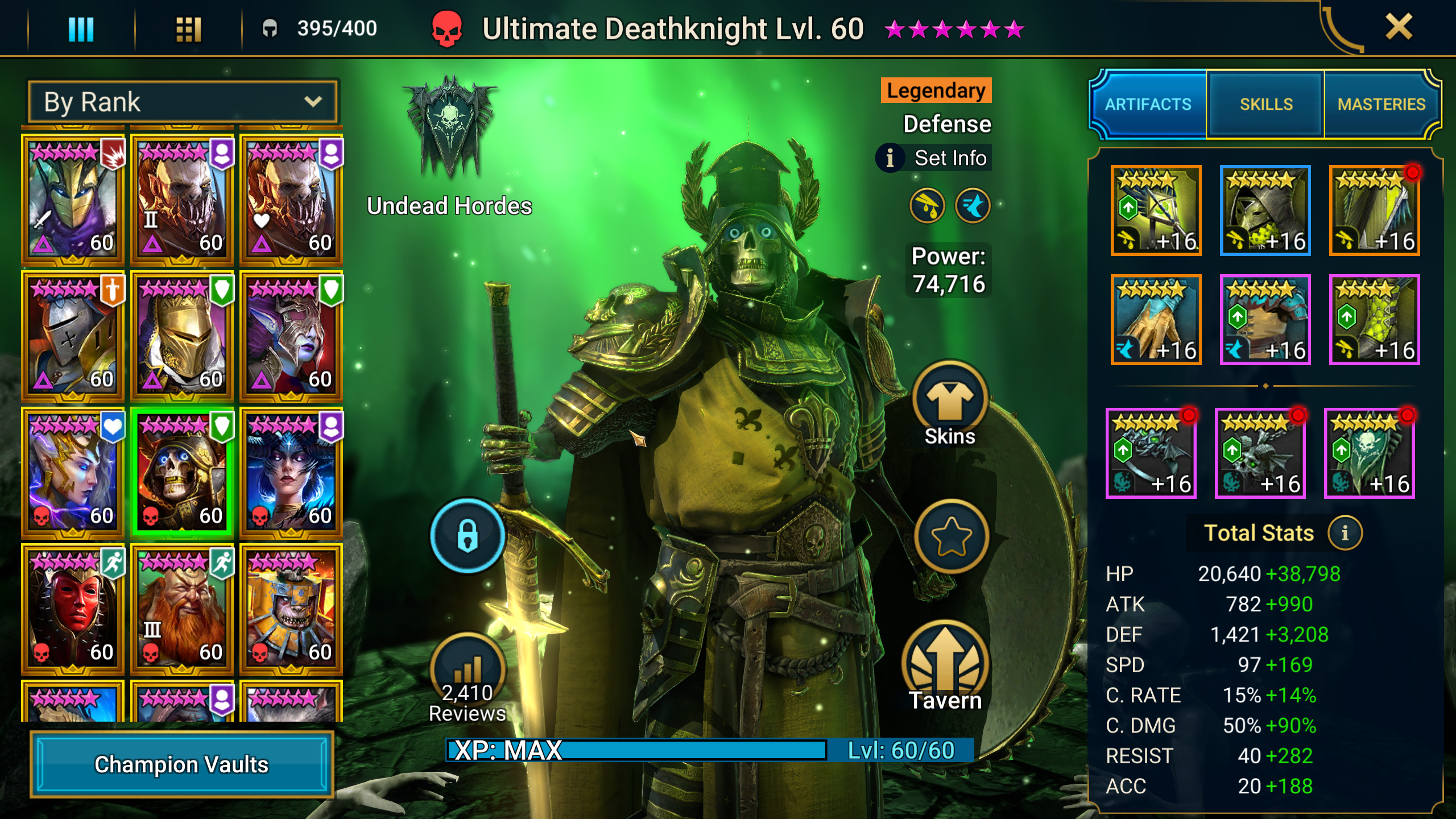