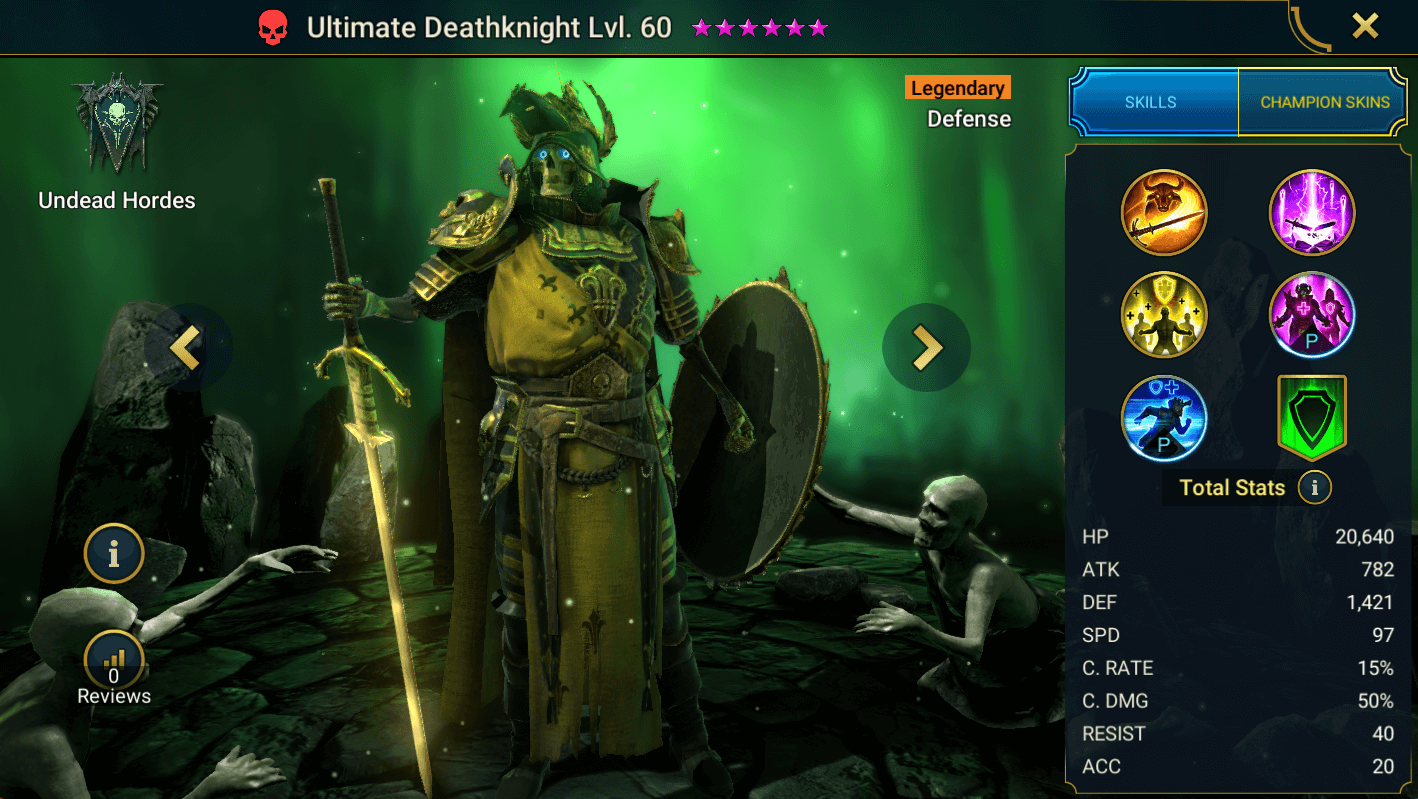 Ultimate Deathknight has a solid kit that will help players progress through Dungeons, especially Ice Golem and Spider. His AOE Decrease Attack ability is a really powerful ability in both of these dungeons and his team shield mechanic is also powerful to help sustain the team. Those same abilities will also be useful in early Clan Boss and Hydra Clan Boss.
One of the most interesting parts about his kit is a passive with the ability to block single target damage and transfer it to Ultimate Deathknight. This is really cool against spiderlings to ensure the damage is always directed at a tank. The same passive could be put to good use against single target hitters in Arena such as Rotos or Mountain King and no doubt will be used in Doom Tower waves against nasty opponents.

Ultimate Deathknight will have some good use cases in Doom Tower specifically against the Magma Dragon where he can provoke and protect the main target from damage & The Scarab Boss where his shield will help to overcome the provoke debuffs.

Books are certainly valuable in his A2 and A3 abilities reducing cooldowns and improving those skills but it is worth noting he is not the best Legendary in the game and will be used less and less towards end game. A more realistic end game build will be to use him to solo Dragon 25 & Ice Golem 25 with specific Niche builds (toxic gear & specific masteries see video below) or as an Arena Specialist.

Rats Off To Ya - 4 Turn Cooldown

Get Comfy Everyone - 5 Turn Cooldown

Too Awesome To Die [P]

Whenever an ally is attacked, has a 100% chance of completely blocking 1 hit, decreasing the incoming damage to zero. This champion will receive that damage instead. It will also redirect any debuffs from the hit to this champion. The chance of blocking a hit and redirecting the debuffs decreases to 50% if the attacker is a Boss. Does not work if the attack on the ally was an AoE attack.

Whenever an enemy is healed, heals this champion by 20% of that heal.

Increase this Champion’s HP, DEF and SPD by 10% for each dead ally.