Yesterday, Plarium released a teaser for a new Hydra Head, however – as you’ll all know, there were lots of jokes flying around yesterday with it being April Fool’s Day. Because of this, we’re not 100% certain whether to take this teaser seriously or not.

Regardless of the potential of this not being real, it does fit in line with the timeline that was released shortly after the addition of Hydra. 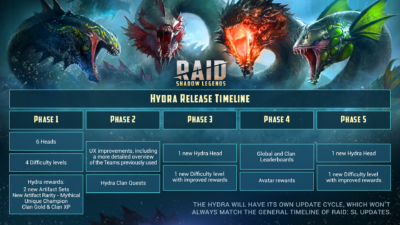 Something wicked this way slithers! The Hydra has had enough of rude Champions invading its home and pilfering its treasures. This time, the welcome that awaits them all will be unlike anything you’ve seen before. Are you prepared?
We shall see soon enough.
This is the teaser that was posted initially on Twitter, which you can find here along with a video of the Hydra.

Of course, many would agree that Hydra needs some serious work for it to be enjoyable content, and the vast majority of people dislike this game mode.

Hellhades is finally beginning to tackle the Hydra and produce content on Hydra with tips and tricks to help everybody dive into it.