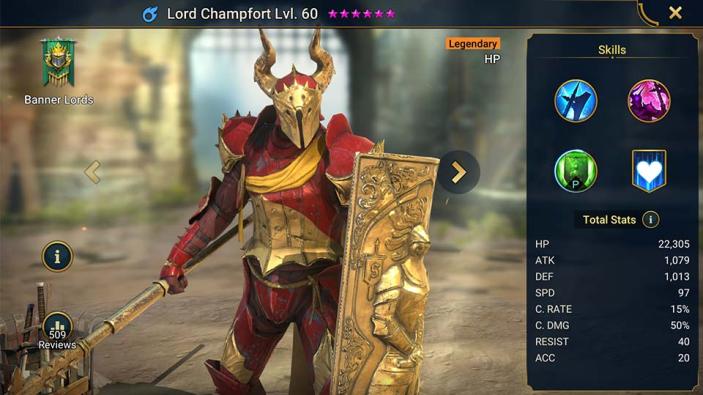 Lord Champfort’s Shield didn’t see much light of day as he sat in the vault until Plarium decided enough was enough and Lord Chamfort received a well-deserved buff in September 2020 making him viable in the game. Quite honestly he needed a buff because what a waste to put that shield in the vault! Lord Champfort is a Legendary who is through and through a Banner Lords! From Looks to Skill Set he really fits the Banner Lord faction.

He is now a good support champion that is able to reduce the damage your team will take in dungeon runs. If you put him as the party lead you’ll get a 50% increase on your ally’s HP due to his aura, plus he brings AOE Decrease ATK and Decrease ACC debuff which will come in handy to defeat the Dungeon runs!

Lord Champfort will excel in Doom Tower vs Borgoth, this is because of Lord Champfort’s Passive Shields himself at the start of each turn. Then he places a Decrease SPD debuff on whoever attacks this champion which in this case in Borgoth!

If you are struggling in the newer content such as Iron Twins or the Hydra Clan Boss then get your Lord Champfort build immediately because he is one of the strongest support champions out there! With this amount of Debuffs he is very useful!

Lord Champfort is a Legendary who is through and through a Banner Lords! From Looks to Skill Set he really fits the Banner Lord faction.

And to top it all off he even has a Decrease DEF single target on his a1 which will definitely come in handy in most areas of content because why not make it easier for yourself to SIT DOWN an opponent?!

At the start of each turn,places a Shield buff on this champion equal to 20% of their MAX HP for 2 turns. Willplace a 15% Decrease SPD debuff for 1 turn on whichever enemy attacks this champion.
Level 2: Cooldown: -1

Increases ally HP in Dungeons by 50%