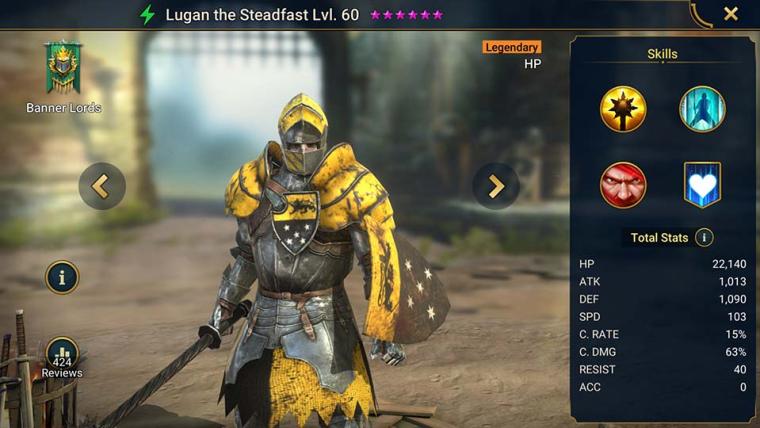 Lugan the Steadfast should be called Lugan the Stinger because all I see when I look at him is a Wasp! This Legendary from the Banner Lords faction is now much better after the buff he received in July 2022 which was to reduce the cooldown of his A2 and to ensure damage of his A3 now scales with HP. These are solid buffs for this champion and certainly, give him a stronger set up for Clan Boss as Ally Protection is one of the best skills if you are not building an unkillable team.

Lugan is a healer and team protector that is capable of dishing out some strong damage. Lugan is one of only a handful of champions in the game that has an AOE 100% block cooldown skills ability, this basically locks out an entire team and forces them to only use their A1 weaker abilities. You will need to build accuracy in Lugans build, also strong crit rate, HP% and Def% to get the most out of his healing through damage and his team ally protection.

Overall a great Faction War champion who is strong almost anywhere in the game and able to solo Borgoth the scarab king in the earlier levels! If you are struggling with Clan Boss and have the rest of the team set up but need that Ally protection then Lugan the Steadfast is the man for the job!