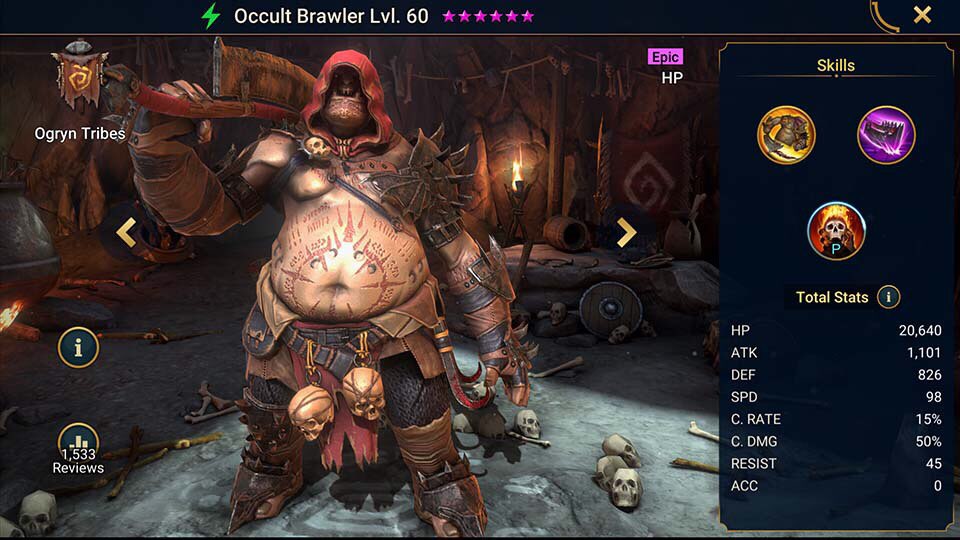 Occult Brawler is an infamous [Poison] champion from the Ogryn Tribe, and has been considered from his inception to this very day as one of the BEST poisoners for Clan Boss.

Occult Brawler is able to maintain a high amount of [Poison] debuffs on a single target for the entire fight against Clan Boss, especially paired with a Counter-attack or Ally Attack Champion.

Knowing you’ll use him in clan boss also means that the grind in minitour for him will be long, as you’ll want to get that juicy T6, War Master, along with all three T5s for the ability to counterattack. Landing these poison de-buffs is crucial, so ensure you have enough accuracy for your purpose. Hop on over to our clan boss section, or deadwoodjedi’s web page for details on the accuracy you need for your point in the game.

General PvE
Clan Boss
Offense
Defense
Support
Offense
Defense
<img title="Selfless Defender - Decreases the damage an ally receives from the first enemy hit in each round by 20%. This Champion will receive that damage instead" alt="selfless-defender" class="lazyload ignore-lazy" src="data:image/gif;base64,R0lGODlhAQABAAAAACH5BAEKAAEALAAAAAABAAEAAAICTAEAOw==" data-orig-src="https://hellhades.com/wp-cont