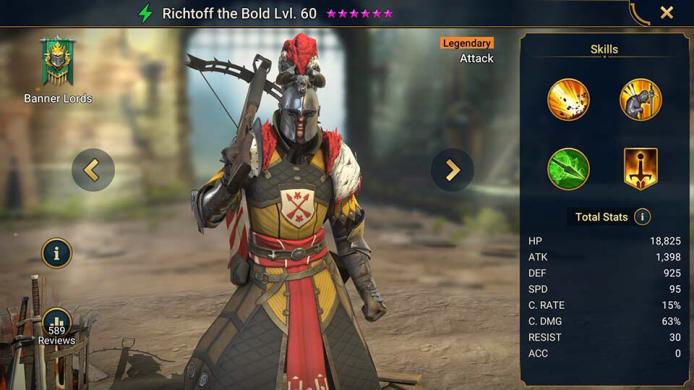 Richtoff the Bold is a bit like that distant Uncle and Aunt because you know they exist but you only see them at family occasions. We know Richtoff exists but we mostly forget he’s in the game. However, he did receive a buff in September 2020 which was much needed because he was a vault champion for the longest time but now he does have some use.

He performs well in Dragon because he uses his a2 to place poisons then his a3 increases his crit damage for each poison on the target, therefore he will smack!

In waves of dungeons, he has some use because of his great AOE poison ability. Paired with poison exploder they can create some of the highest damage and fastest compositions in Raid.

Richtoff has been widely used in Doom Tower in these exact compositions. He has a decrease enemy max HP ability on his A1 and is one of the few positive affinities to Borgoth to do this to break his shield.

He is also a great champion for Ice golem and strong in Faction Wars.

Clan Boss
Dragon Solo 25 Farm
Offense
Defense
Support
Offense
Defense
<img title="Selfless Defender - Decreases the damage an ally receives from the first enemy hit in each round by 20%. This Champion will receive that damage instead" alt="selfless-defender" class="lazyload ignore-lazy" src="data:image/gif;base64,R0lGODl