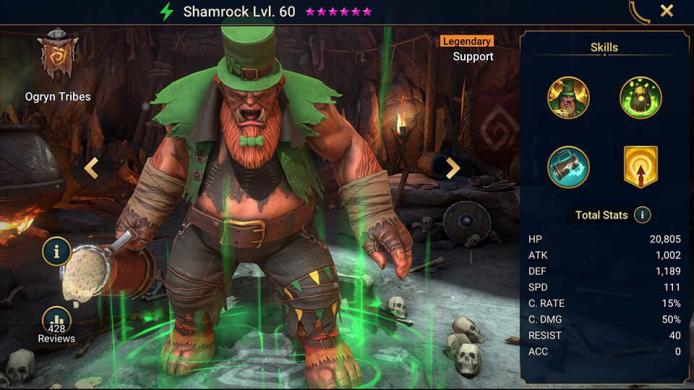 Shamrock was one of the very first Fusion’s in Raid Shadow Legends, behind Sir Nicholas, back in May 2019, and was inducted into the Ogryn Tribe,

Shamrock spent a very long time being considered a Vault Lord, but was buffed and became comfortably mid-tier, who can be used in many areas of content but doesn’t stand out in any of them due to the obvious power creep within the game.

For Early-game progression, Shamrock will be an excellent Champion but will be able to do his job at level 50, providing your team with valuable buffs and debuffs for the enemies.

Shamrock has seen a place in some Hydra Teams, however, including some that are capable of 1-keying Nightmare Clan Boss.

Increases Ally ACC in all battles by 70

Speed Booster
Offense
Defense
<img title="Delay Death - Reduces the damage this Champion receives from a specific enemy by 0.75% with each hit taken from that enemy. Damage reduction stacks up to 6% for each enemy" alt="delay-death" class="lazyload ignore-lazy" src="data:image/gif;base64,R0lGODlhAQABAAAAACH5BAEKAAEALAAAAAABAAEAAAICTAEAOw==" data-orig-src="https://hellhades.com/wp-content/plugins/rsl-masteries/assets