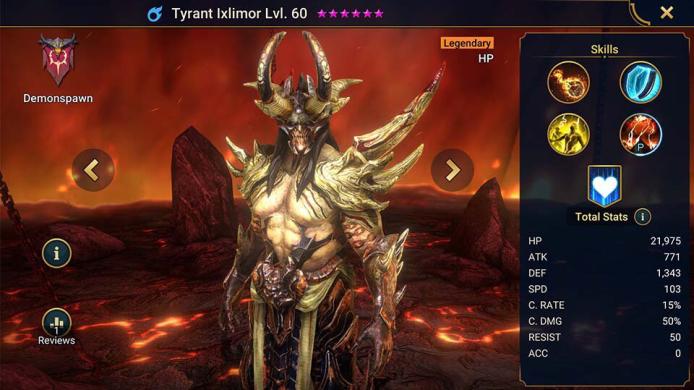 Tyrant Ixlimor is a Magic affinity legendary from the Demonspawn faction. Tyrant is known as one of the best champions in the game to kill Spider 20! Paired with Miscreated Monster they can easily two man one of the hardest dungeons in Raid: Shadow Legends. Tyrant has an AOE HP burn skill and an Ally Protection ability making him great for Spider.
Tyrant is a generally strong champion in most content but also excels in Clan Boss and Faction Wars where his passive ability to reduce the damage your team takes is huge! Best to gear in Stalwart sets, speed sets or Perception. Ensure he has high accuracy, speed and defensive stats.

Decreases damage inflicted by enemies under HP Burn debuffs by 10%.

Increases Ally HP in all battles by 25 %.