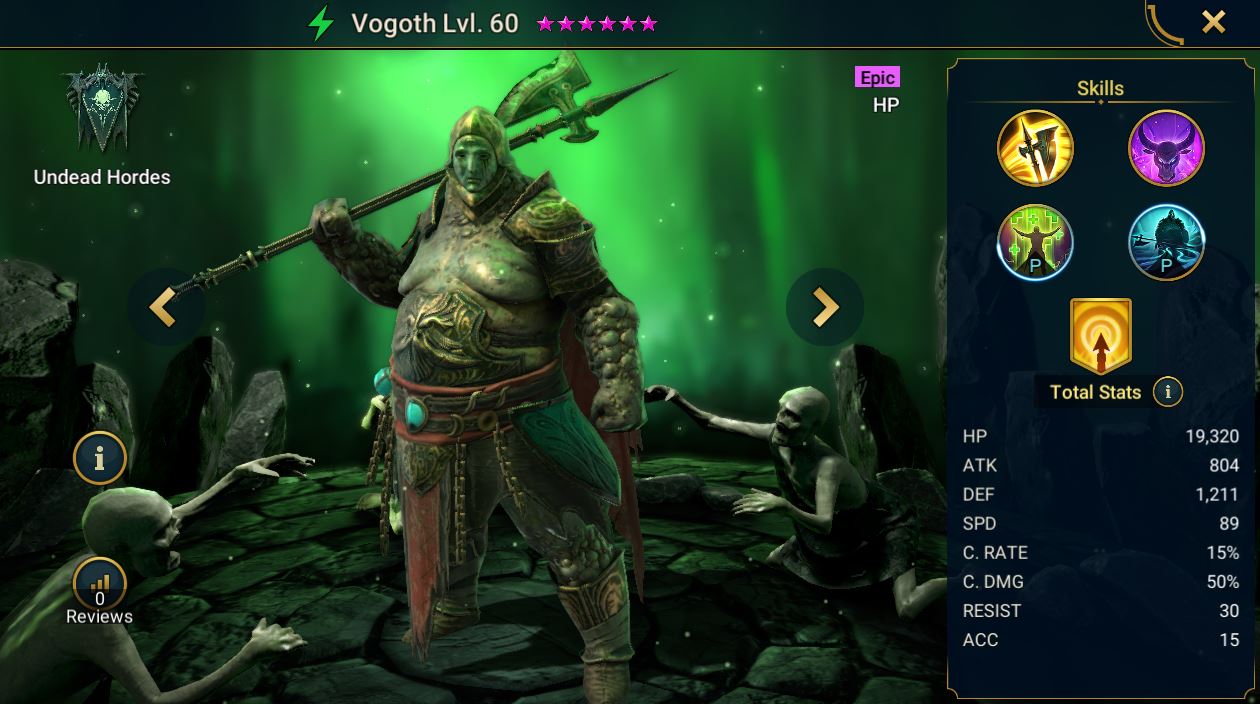 From the marshlands in the deep west Vogoth and his Horde mastered the art of passive healing giving them all extremely long lives. No-one truly knows his age or his origins but he is seen as nearly immortal with his skin tissue regenerating even as you strike him.

Vogoth is a Spirit affinity epic from the Undead Hordes faction. Vogoth was added to Raid Shadow Legends in January 2021 as part of patch 3.2. Vogoth is an HP based champion enabling built-in survivability that pairs well with his AOE provoke and decrease attack A2. He also has a built-in heal mechanic on his passive and places leech as part of a 2nd passive. This is useful in a Clan Boss team that is looking to move away from lifesteal gear.
Vogoth is a god-tier healer against Bommal where the bombs exploding endanger your team (paired with Geomancer he is deadly). He is also used at high level runs of the Iron Twins and can carry a team against any dungeon. The triple hit give him decent utility against Fire Knight but one tip, he hits like a noodle, so don’t build for damage, build as a tank.
In high level arena Vogoth is being used as an amazing defensive unit healing his team whenever big hits are coming in!
Vogoth is a great all-rounder capable of supporting teams against most content and the best part is books are not essential to gain his healing power!

Increase Ally ACC in all Battles by 40

General PvE
Clan Boss
Offense
Defense
Support
Offense
Defense
<img title="Delay Death - Reduces the damage this Champion receives from a specific enemy by 0.75% with each hit taken from that enemy. Damage reduction stacks up to 6% for each enemy" alt="delay-death" class="lazyload ignore-lazy" src="data:image/gif;base64,R0lGODlhAQABAAAAACH5BAEKAAEALAAAAAABAAEAAAICTAEAOw==" data-orig-src="https://hellhades.com/wp-content/plugins/rsl-masteries/assets/images/masteries/d