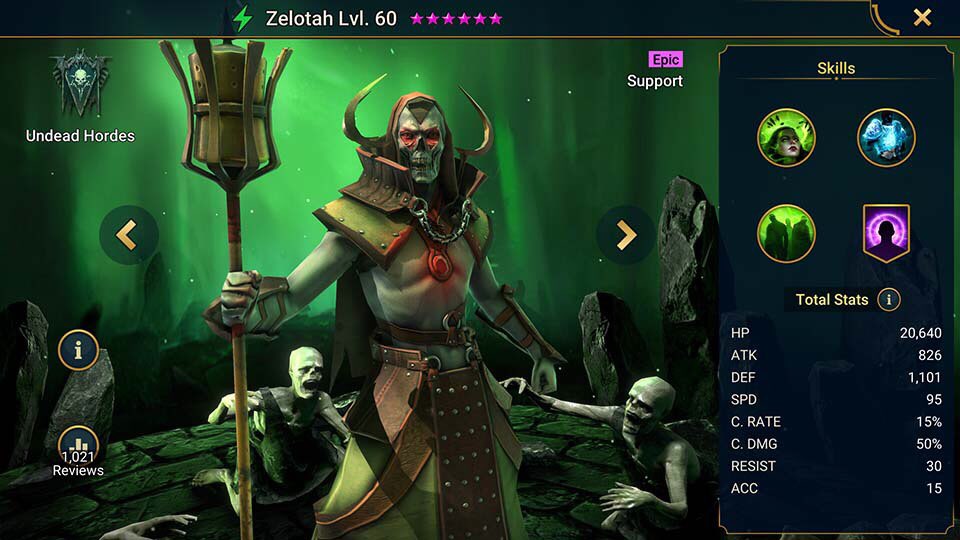 Zelotah was originally a priest in the Sacred Order. He was driven mad when his mother died in his arms to the black plague and joined a splinter sect working dark magic. This was the beginning of the downfall of Zelotah who excelled in Necromancy quickly developing a following of his own. The deeper his knowledge grew the stronger his desire to learn until all acts demanded blood sacrifice. Eventually he was stopped by the Sacred Order and killed, but little did they know he had already learnt the arts of the Undead and now he joins their army.

Zelotah is a Spirit affinity epic from the Undead Hordes. Zelotah has been a mid tier epic forever in Raid but has a solid purpose since Doom Tower was released with a strong shield skill capable of keeping a team from taking counter attacks from Borgoth the Scarab King. Zelotah can bring utility and support in other areas too such as Ice Golem and Spider with a full AOE sleep ability and some healing. If Zelotah’s A2 was on a 3 turn Cooldown instead of 4 he would raise considerably in my view however the timeframe to get those support abilities back are too long for most encounters.
Zelotah is useful early game as a defensive unit in Arena but rarely seen later as rosters develop. To get the most out of his A3 ability ensure a different debuffer (i.e. an AOE decrease atk or defence) goes before Zelotah to give him a 100% chance to sleep everyone provided you have enough accuracy.

Increases Ally RESIST in the Arena by 70