How to build Royal Guard?

How to build Royal Guard?

Who is Royal Guard?

Royal Guard is an Epic from the High Elves faction and one of the most desired Epics in Raid: Shadow Legends! Royal Guard is the hardest-hitting Epic in the game versus Dungeon Bosses and one of the hardest-hitting overall champions in the game! He has an A2 ability which scales from the Enemy Max HP. Therefore the further you get through the game and fight tougher enemies, the higher their HP and the harder this ability hits for!

Royal Guard also has a single target decrease DEF on his A1 and a multi-hitting A3 which decreases turn meter and speed making him a truly amazing champion.

Where is Royal Guard used?

Royal Guard is very commonly used in dungeons level 16 through 20, due to his MAX HP ability hitting obscenely hard, as you may have seen in Spider 20 Farm teams, capable of nuking the boss in sub 15 seconds.

However, for level 21-25 despite the MAX HP cap, Royal Guard is still incredibly viable and is very commonly used in Speed teams for Fire Knight 25 and Dragon 24 due to his affinity advantage and ability to nuke waves while also reducing turn meter/speed on the boss (for Fire Knight).

Royal Guard can also be used effectively in Doom Tower, although MAX HP is also capped here, the rest of his kit really brings a lot to certain bosses, while still having the ability to deal damage when Takedown recycles back around.

How to build a Royal Guard to nuke?

So, when it comes to building a Royal Guard, there are a few things you need to take into consideration.

These  3 points are very important to keep in mind when you’re building a Royal Guard as if you for example are only using your Royal Guard for Spider 20 speed farming, he is positive affinity, meaning you only need 85% Critical Rate, as you gain the affinity bonus from him being positive affinity.

The reason this is important is it allows you to build more stats into your build, for example, Critical Damage to enhance your nuking capabilities.

The next question is whether you consider ACC required in his build, as once again – this will allow you to put more emphasis on damaging stats if it’s not required. It’s likely that you do not need to consider this when building for Spider or Dragon, due to the nature of speed teams here, you will likely be covering the required debuffs from other means, such as an AOE Defense Down + Weaken Champion.

However, if using Royal Guard in Fire Knight or Doom Tower (for example, Astranyx the Dark Fae) having the Turn Meter control on A3 being able to land is incredibly useful as well as Decrease Speed.

Below I will show 2 examples of how you could build a Royal Guard for different areas, the first is purely focused on nuking, such as Spider 20. While the second is more focused on Fire Knight 25 and Doom Tower. 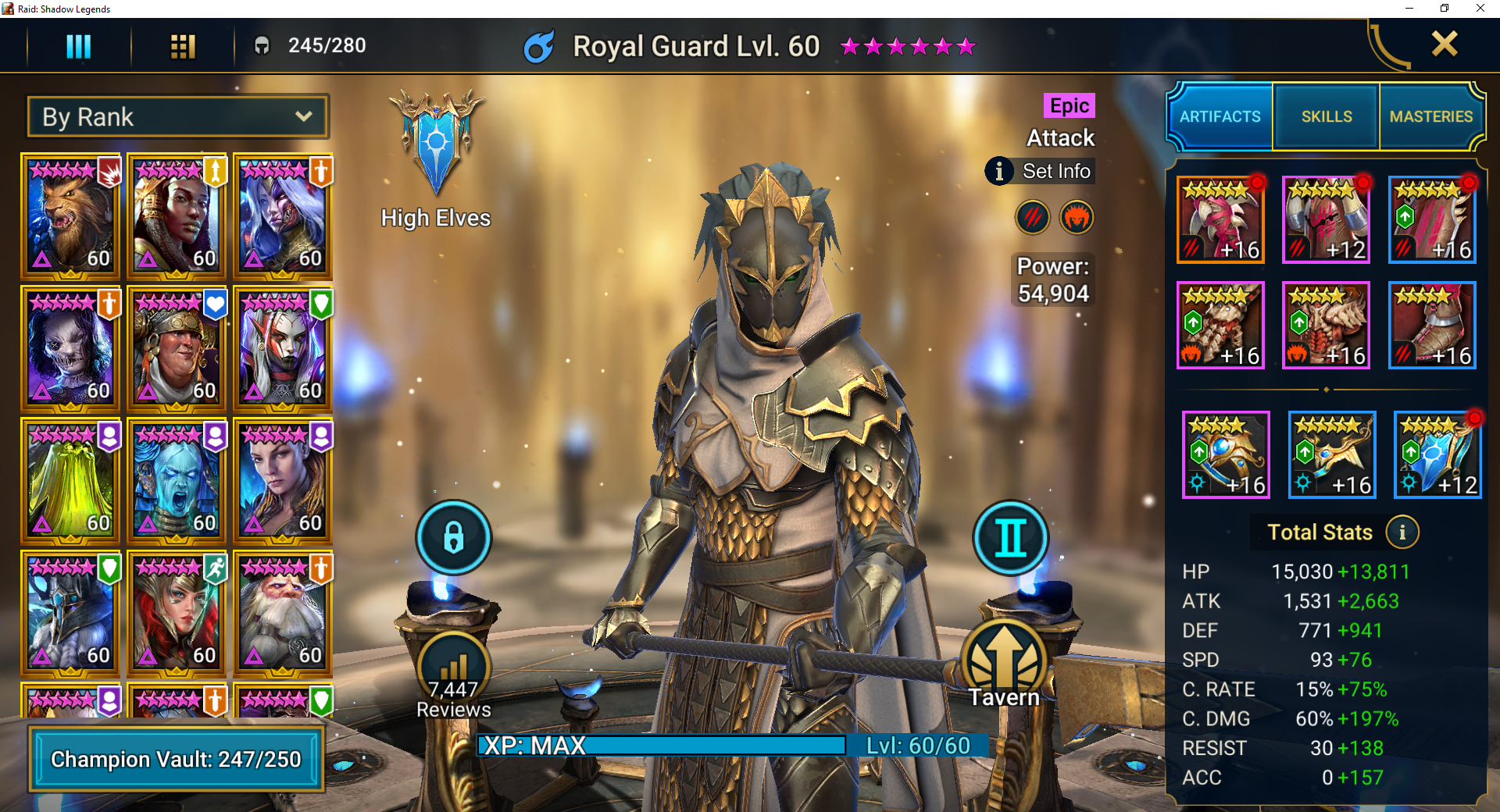 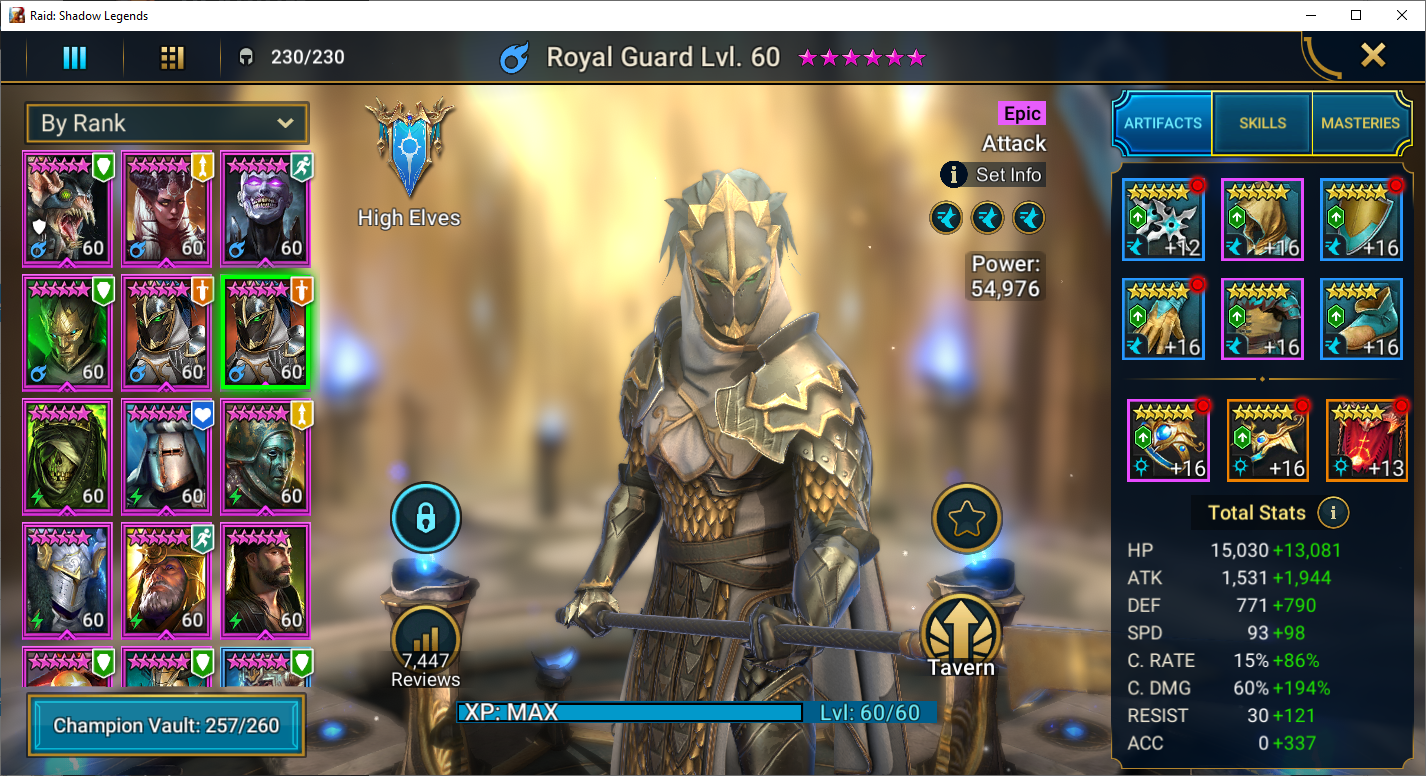 Is Royal Guard worth booking?

So in regards to booking Royal Guard, it once again depends on where you intend on using him, if you are only interested in his A2 hitting obscenely hard, then it is definitely worth booking that ability (if you get lucky!) as you won’t actually be utilizing the other skills in his kit, they don’t require booking.

But if you’re using Royal Guard in a scenario where you will be utilizing the other abilities, especially the A3 – then in an ideal world you will have this ability booked due to the reduced Cooldown and chance to land Decrease Speed.

What are the best sets for Royal Guard?

In terms of sets for Royal Guard, to maximize his damage the answer will always be Savage, with either Cruel or Critical Damage sets, because these will significantly amplify the output for the A2 damage, along with other abilities if necessary.

If you are able to maintain the required stats for your build (Speed/Accuracy) while sticking to these sets, you’ll be getting the best bang for your buck.

However, as always – stats > sets – hitting the required stats will always be the most important focus for any build.