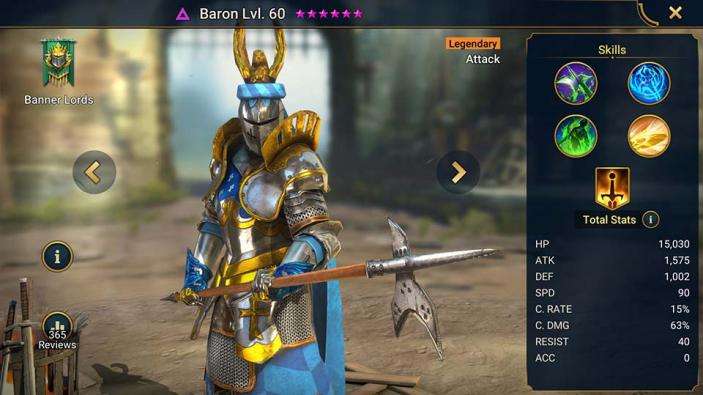 Baron has the shiniest armour in all of Raid, it is rumoured that he uses a secret family polish that has been passed down for generations and is likely to be passed down to future generations of Barons!

Baron used to be a unique niche champion until he received a “buff” in September 2022 which caused the Banner Lord to lose his Pure damage ability and gained a hard-hitting AOE in its place. The reason for it being so niche was because there was only a 40% chance to unlock the secret skill and for most players, this luck wasn’t enough to make him a viable champion in the game and only the elite would actually use him for this skill. This now makes him one of the best champions in Raid for the arena and a great counter to Bolster shield set, Krisk and Nekhret as it also ignores shields. This is also awesome that his A4 doesn’t need books!

Baron does have a great a2 which is a single target Decrease DEF debuff and you may be thinking oh why is that so great?! The reason is the debuff is guaranteed and cannot be resisted or Baron cannot misplace the debuff, this makes him very good in places like Spider, especially with the Nukes he has in his arsenal!

Baron is best known for his A1 ability that does insane damage to all other enemies if he kills someone, this strategy is used a lot in Doom Tower waves.

Attacks all enemies. Will ignore Shield and Block Damage buffs, as well as 50% of the targets DEF.

Increases ally ATK in all battles by 33%

Nuker
Offense
Defense
<img title="Wisdom of Battle - Has a 30% chance of placing a [Block Debuffs], buff on this Champion for 1 turn when [Stun], [Sleep], [