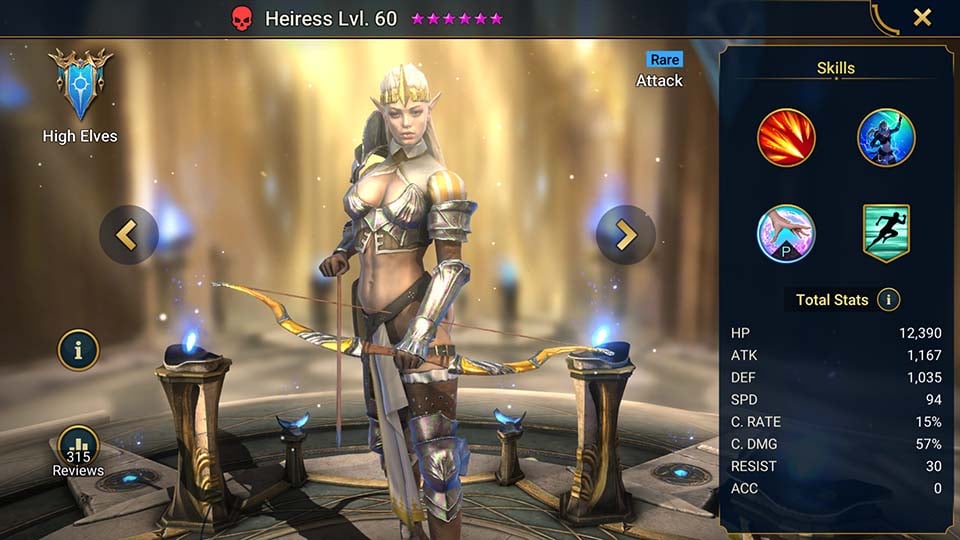 Heiress was a forgotten Rare that you could earn as a low reward by Farming Campaign Stage 6 (Palace of Aravia) until the release of Demytha. Since then she has become a crucial part of some of the best Clan Boss teams.

Her kit for a rare is very strong. She brings an AoE 1 Debuff cleanse on her A2 making her ideal for clearing off affinity debuffs and the Stun which also places a 30% Speed Buff for 2 turns. This ability is crucial in enabling 2:1 ratio clan boss teams and to ensure your team remains in tune for all affinities. In addition, she also has a built in Counter-Attack with only 1 turn cooldown. This makes her an ideal candidate for a Toxic set as she will have the chance to place after every clan boss attack on her.

Outside of Clan Boss, she can really help with some of the tricky Rare Only secret rooms in Doom Tower as her A1 has an Extra Turn if she kills an enemy. Often you can bring Coldhearts or your starter champions to soften up the enemy but you need someone to clean up the remaining foes as any attack on your champions will normally be an instant death.

If you are building a Demytha Clan Boss team and also looking for champions to help complete more Secret Rooms, there is none better than Heiress!

Counterattacks the attacker when an ally is attacked

Increases Ally SPD in Dungeons by 16%