Now comes the time to start to put together some of our teams to progress through each area of the game’s content, unfortunately, many of the Champions are underdeveloped and missing masteries, ascension potions and are currently completely naked, so it’s going to be a long grind to get this to where it needs to be!

The first things we’ll be tackling are as follows:

Due to the high amount of Champions we need to build, we’ll be focussing on just 1 team to begin with, that we can farm arena battles with and work our way up, and using the same team for our arena defense at the same time for now, which will consist of:

This team will enable us to farm most opponents and get up to Gold V without many problems quickly and easily.

We of course want Siphi to be in the fastest gear that we have, so we head over to the optimiser and select the following settings which are nice and simple as there is only 1 thing that we care about, SPEED.

The optimiser quickly threw out our fastest possible build, which was 357 Speed, which was the one we’d run with, even if it meant we were using Flat Stat items, as the only stat that was important was Speed and these are our fastest items. 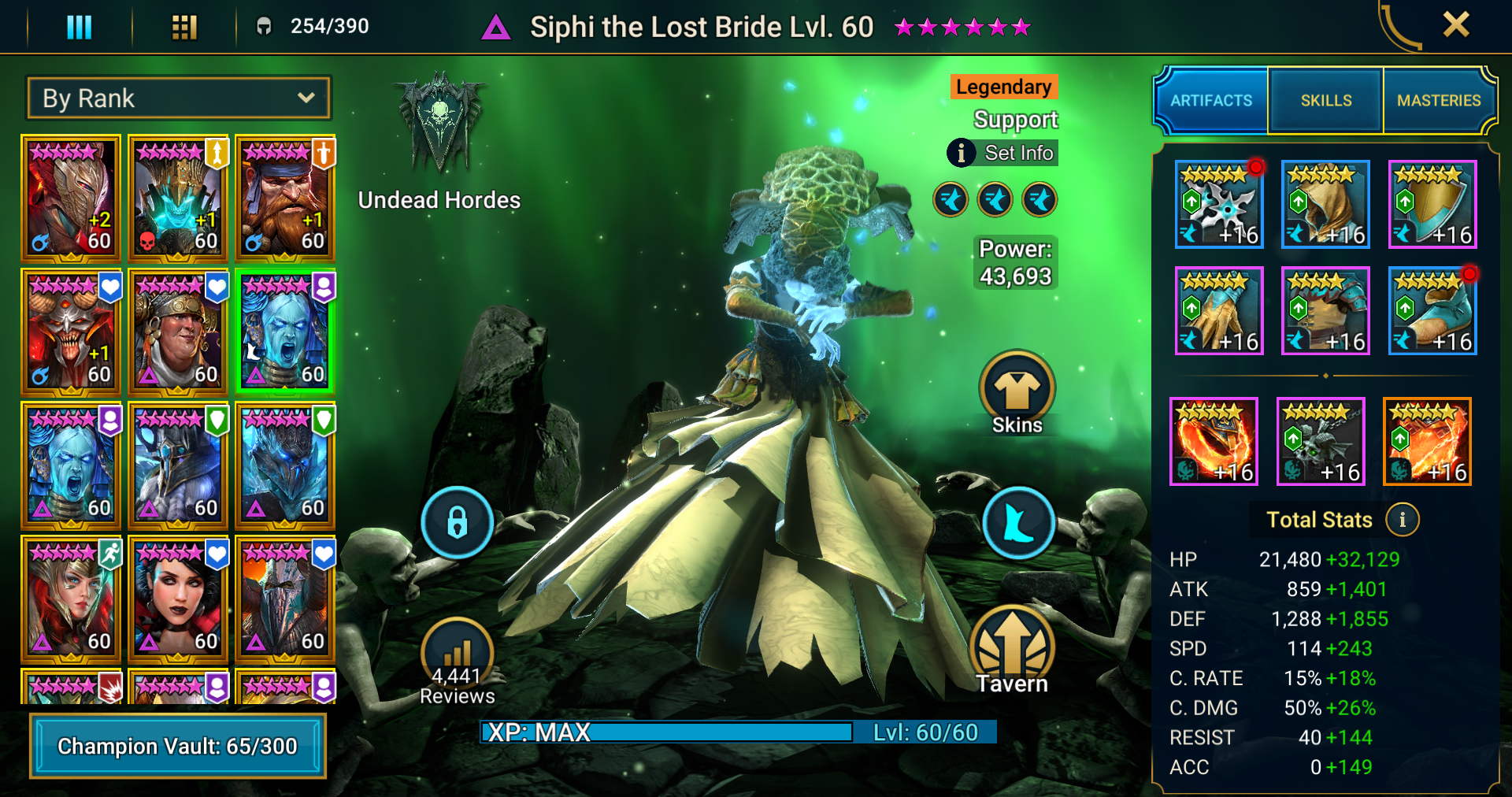 Now that we have our fastest Champion in place with Siphi, it’s time to build out our 2nd fastest, which will be Prince Kymar, who needed to be speed tuned to go after Siphi all the time.

This meant it was time to head over to DeadwoodJedi’s Arena calculator, to determine what speed was required for this. 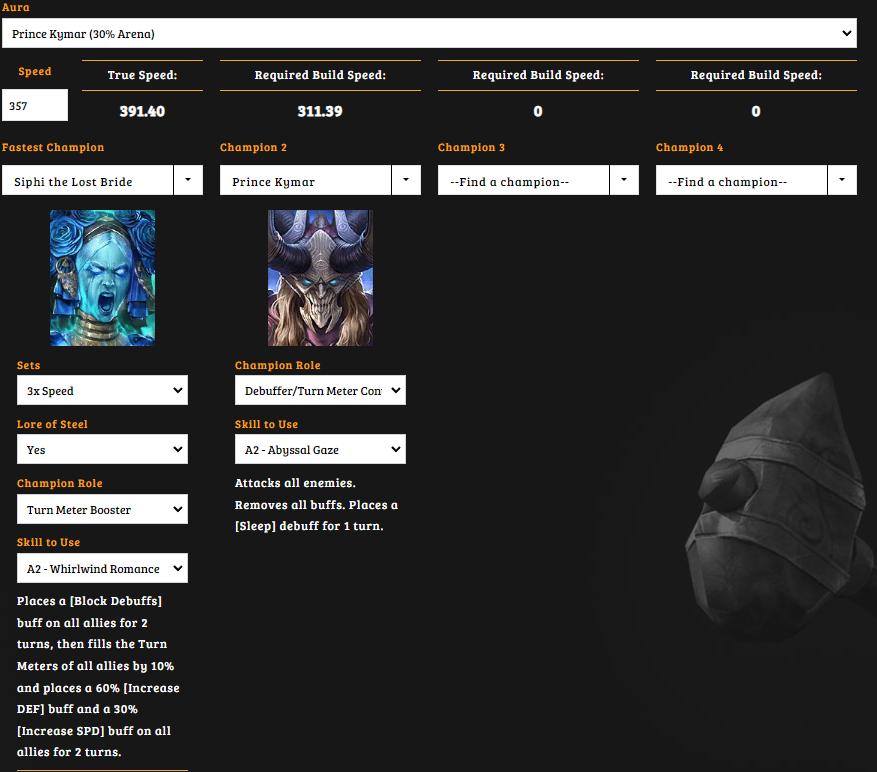 So, back over to the optimiser to get our Kymar built, we know we need at least 311 Speed on his build, which with our gear options may be a little bit of a struggle, as we also need to think about Accuracy, but in the lower tiers this will be less of a problem and something we can work on over time, so hitting the speed is the most important part.

While we don’t have many glyphs, they are something we can pick up over time so initially, we can be a little bit lenient with the speed if there is Glyph room available on the items.

We found a build with 297 Speed and 345 Accuracy, before accounting for any masteries and with 3 items without a single glyph, and a few low glyphs at +3 which gave us lots of wiggle room to improve on the build over time, this was the one we’d be going with! It consisted of 2x Speed, 1x Perception sets. 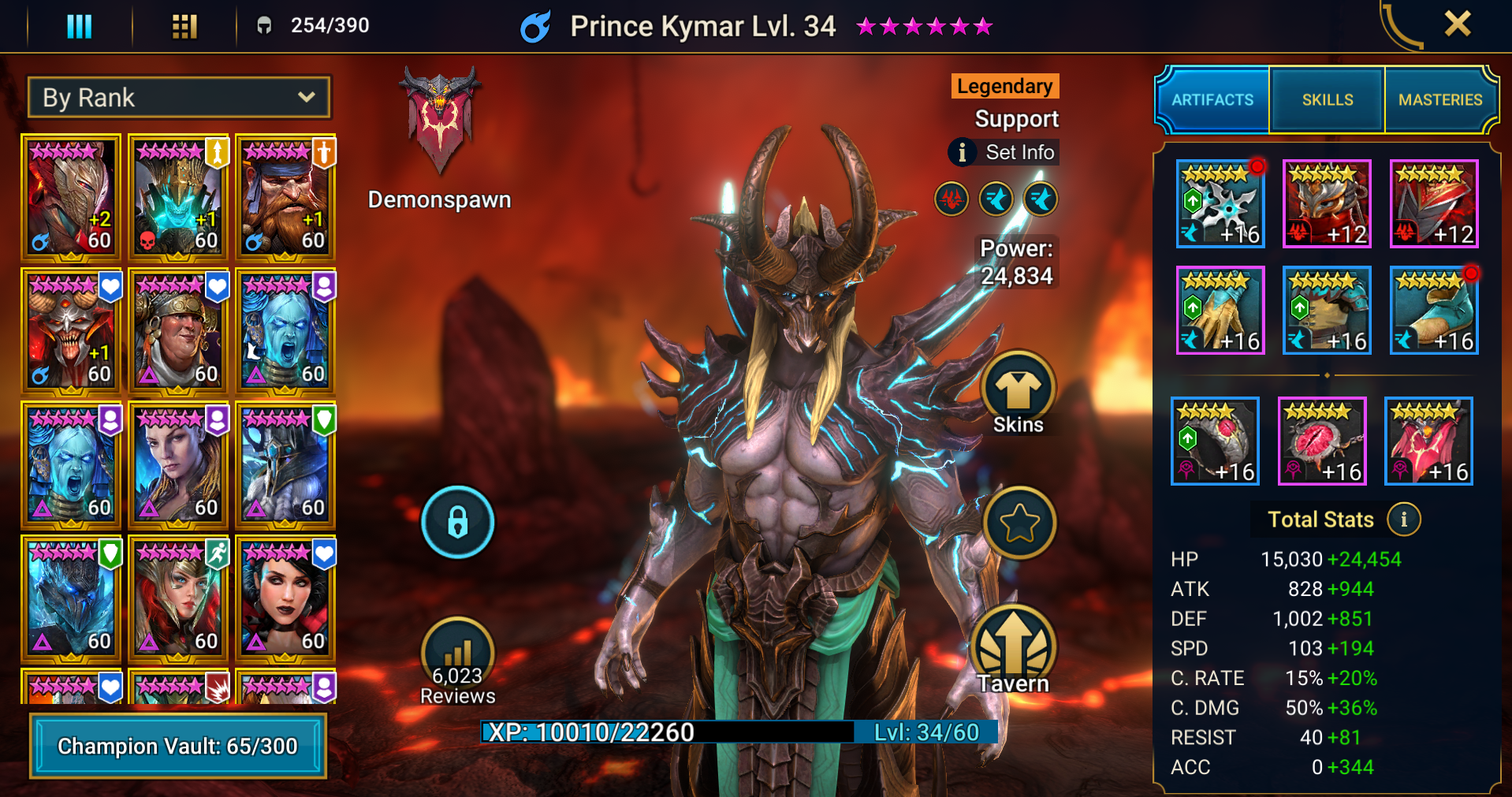 Building both Rotos the Lost Groom

Now that the core of our team is built, it’s time to bring in the big guns (or well, hopefully at least, depending on how strong we can make them!)

We’ll be using Double Rotos in this team, so let’s head over to the optimiser and see what we can come up with for our builds!

We will be using the following settings on the optimiser for both Rotos, ideally getting at least 1 into savage is the goal. 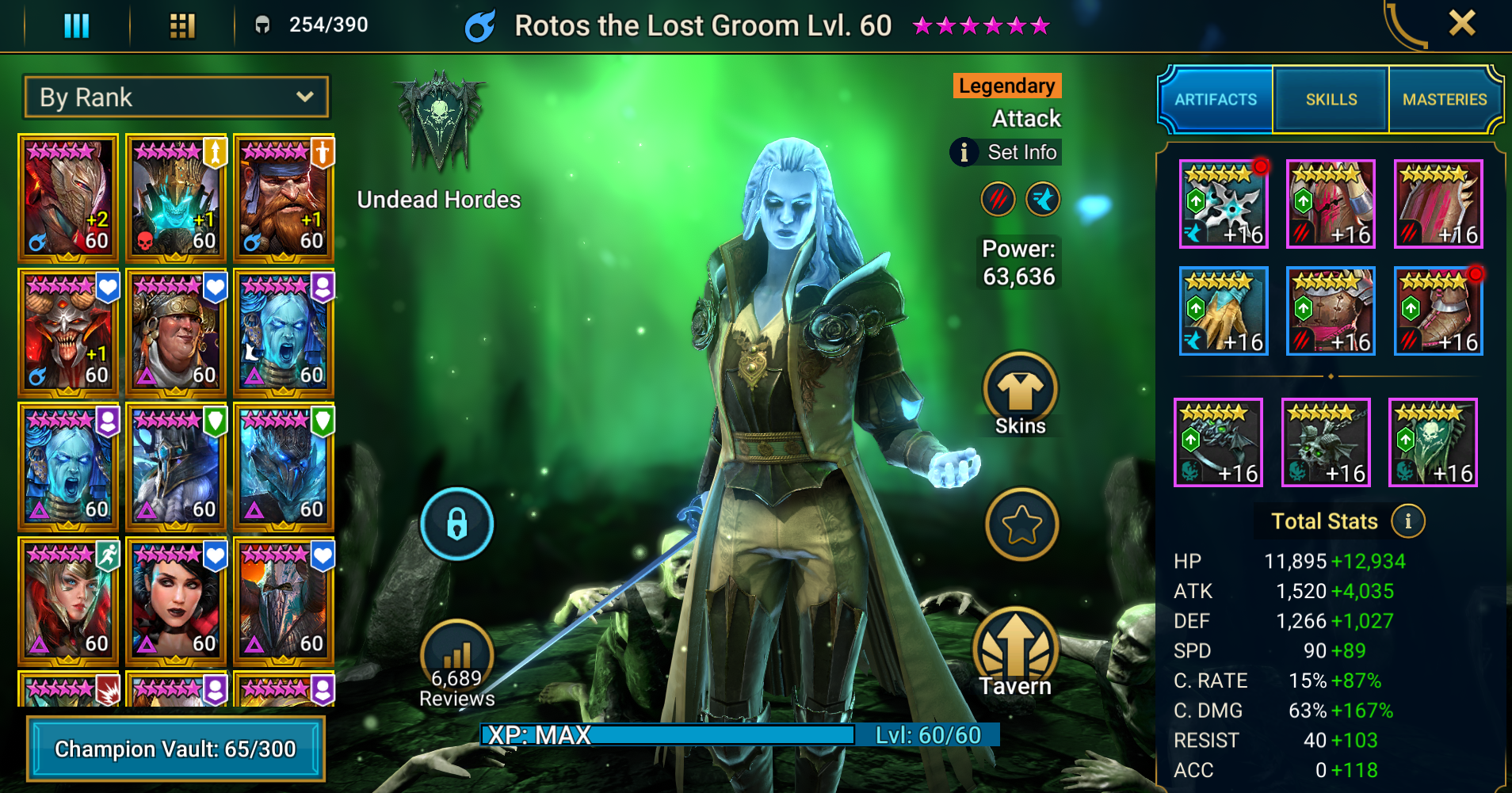 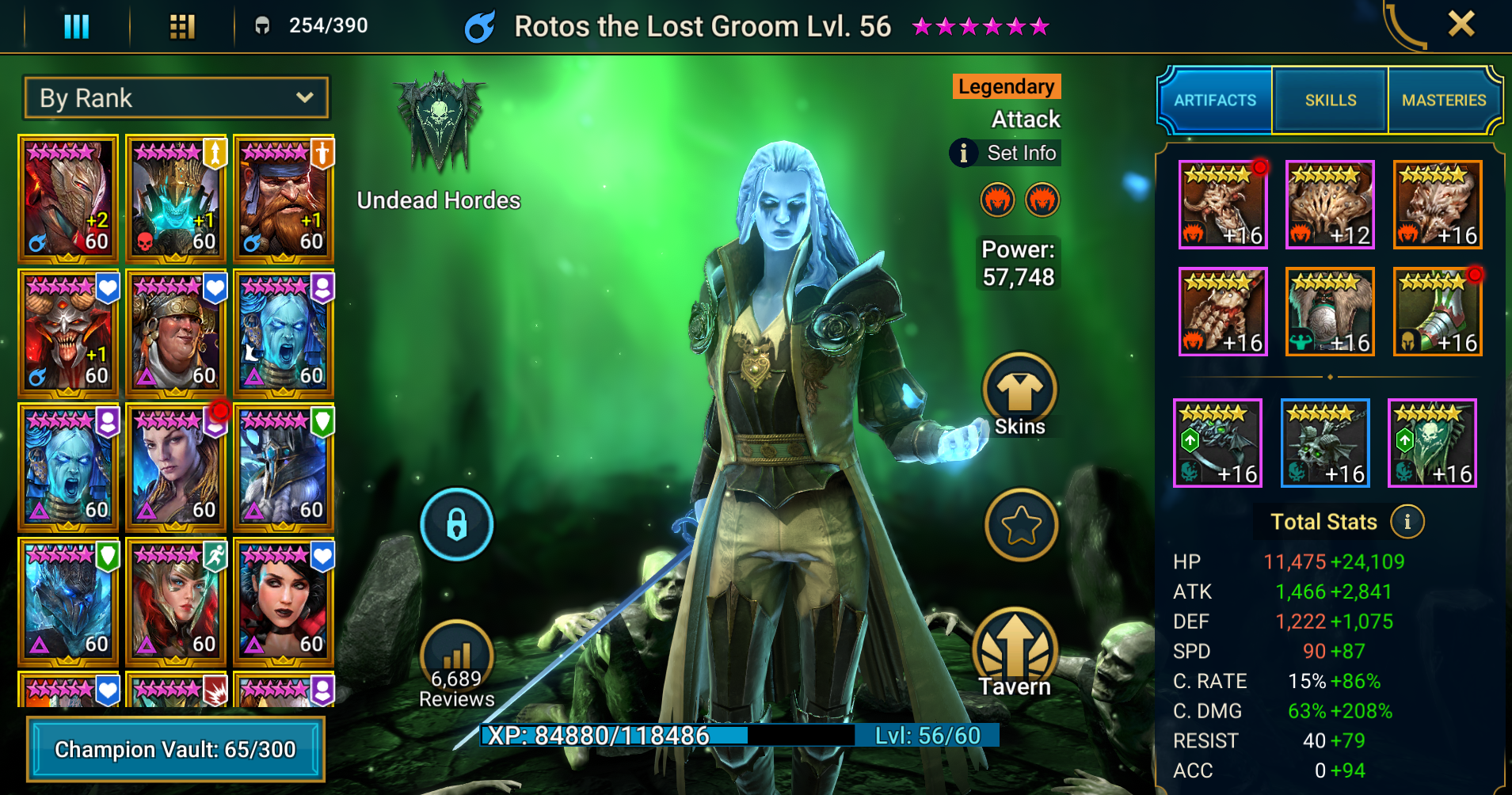 As you can see, we could only get 1 of our 2 Rotos into Savage, while the other was in mixed sets, but this was the most optimal damage builds for the account and would see us through for the foreseeable future until we can improve them!

And as if by magic, we now have an arena team that we can farm up to the higher ranks of Gold Arena, instead of sitting in Bronze 1!

Since many of our Champions that we are aiming to use are currently un-ascended, and we don’t have the potions stocked up to blast them all, this is a super high priority for us, so we will be building a makeshift team that will be improved over time that can farm each of the potions keep stages for the time being.

This will consist of Duchess Lilitu, Kymar, Lydia, Seer & One DPS Champion, which will likely be Rotos due to him being built for arena, we don’t want to throw unnecessary gear on Champions at this time.

Building our Seer will be straight forward using the optimiser to prioritise Karma Burn Damage, while also accounting for some accuracy to rip off any buffs the bosses may get, which is also very important for Doom Tower going forwards.

She doesn’t need to be mega fast, and must be slower than Lydia, Kymar and Duchess which won’t be hard to achieve! 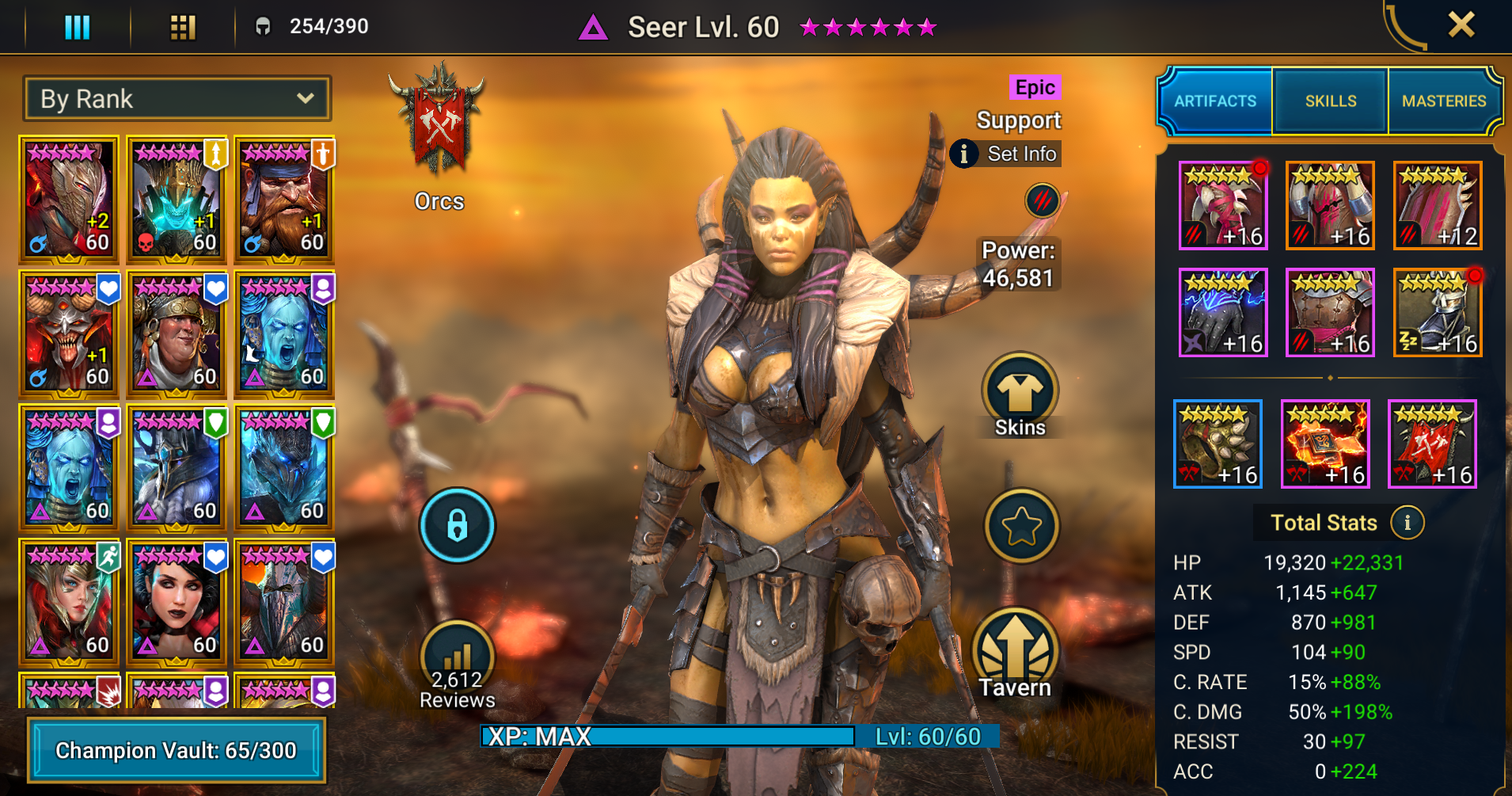 When building this team, unfortunately, Lydia was completely unascended, but we’ll be building her as if she was ascended, as hopefully, she will be before too long!

With Lydia, we want her fast, with high accuracy and strong defensive stats to make her a hybrid build for many areas of the game as our core debuffer, as she will be used in nearly every situation with Seer. 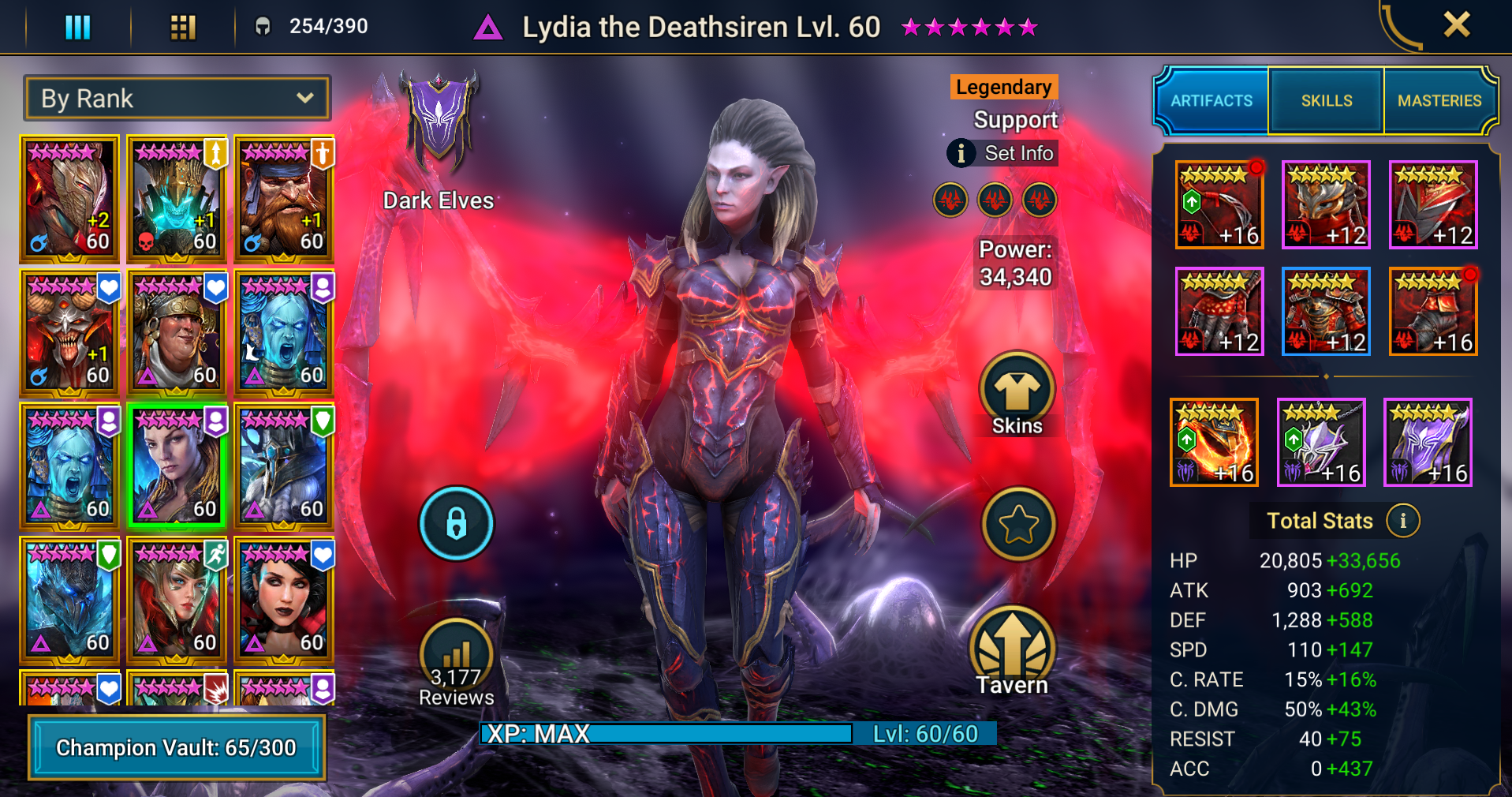 When it comes to Duchess Lilitu, we want her to be as tanky as possible, with a decent speed for the time being as she will be used in a lot of Doom Tower and Dungeon Content, while eventually our 2nd Duchess Lilitu will pivot into a more Arena orientated build.

In this situation though, we were able to build Duchess in Swift Parry using the EHP Settings on the Optimiser to maximise her survivability stats. 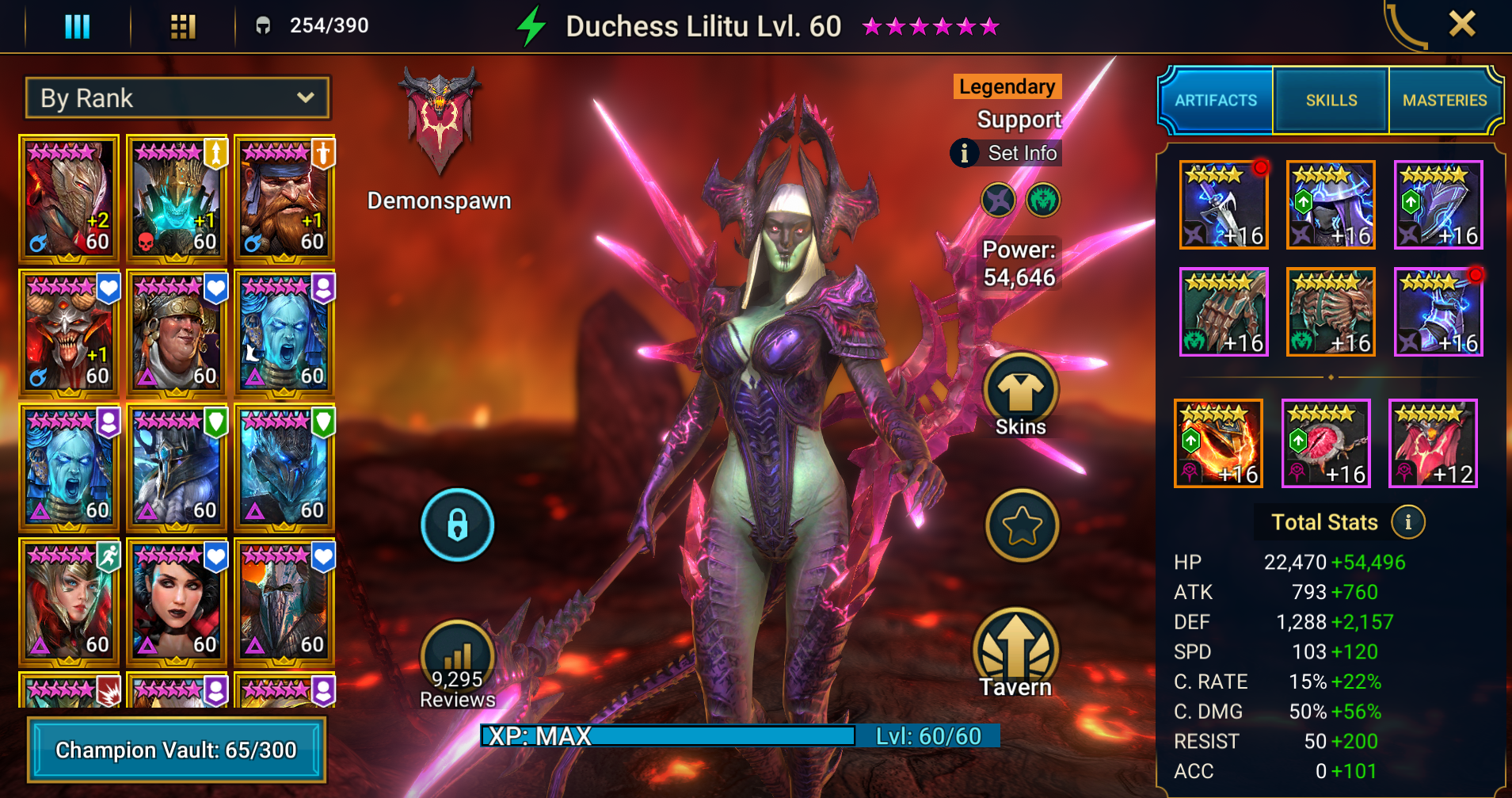 And now, it’s time to run potions! This team will work on all of the potions keeps, although may not be the most optimal for some, it will do the job while we build up the Champions we’re in need of, and will also work in Minotaur by replacing Rotos with the designated Champion for Masteries.

Stay tuned for the next update where we’ll look at building our Clan Boss team finally! We’ll be farming their masteries in the coming days! 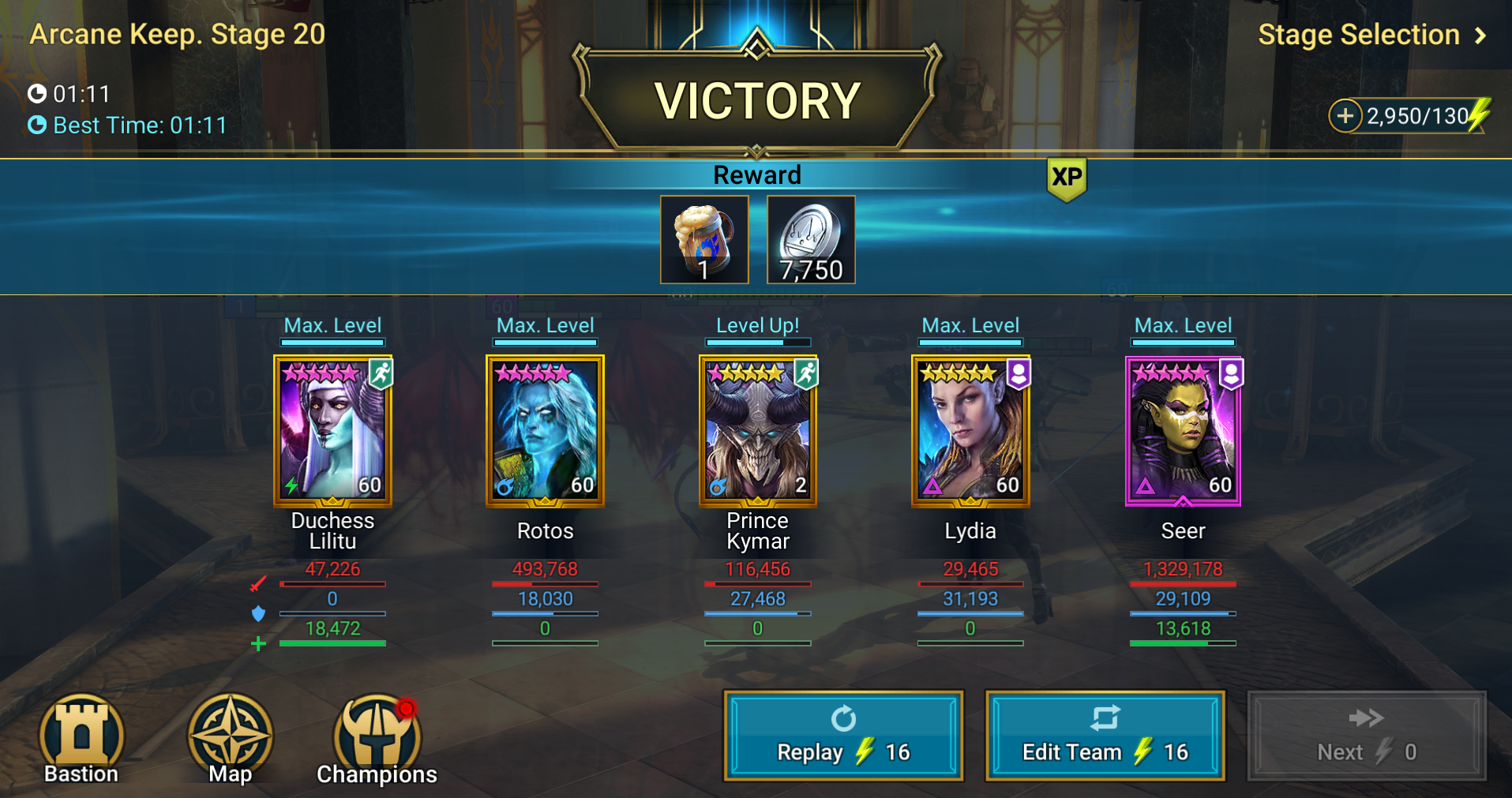