10 mid-game tips that you need to know in Raid Shadow: legends!

10 mid-game tips that you need to know in Raid Shadow: legends!

Are you stuck in the mid-game of Raid Shadow: Legends? Read this article and let us get you progressing to the late game! These tips below will change the way you see your game.

Lots of end-game players do not know the difference between these two game mechanics that we use all the time!
The main difference you will need to know is that an aura increases the base stat and skills increase the overall stat!
For example, speed has an average base speed of 100. Therefore with the aura, you will be on 100 + the % of the aura which is around 19-30% so with the aura you will be sitting on 119-130 speed before artifacts. Whereas skills is an ability that buffs the total speed stat. This is after artifacts and after an aura in place. For example, if someone had a total speed of 200 then with a 30% speed buff the champion will be on 200 + 30% so it increases to a much larger number.

Another difference between the two is that an aura will carry on even if the lead is dead whereas the skill will only last as long as the person casting it lives, so if they die then you don’t gain a buff and it isn’t as effective. From mid to late game you will combine the two to make the fastest speed lead you can.

Defence vs HP in clan boss

So have you ever wanted to know whether to build more hp or more defence? Well, the answer is to build defence because it is stronger than hp as it will defend your team more. In the clan boss, you should be aiming to hit 4500 defence as an end game goal for the ultra nightmare. Anything after 4.5k will be deemed as not as effective as building hp.

Having good defence is vital in doing more damage to the clan boss and potentially reducing the keys needed to hit the max chest.
This graph before represents the damage mitigation you get from defence. At 4500 defence the additional stats start to be wasted.
Big brain post about in on Reddit here! 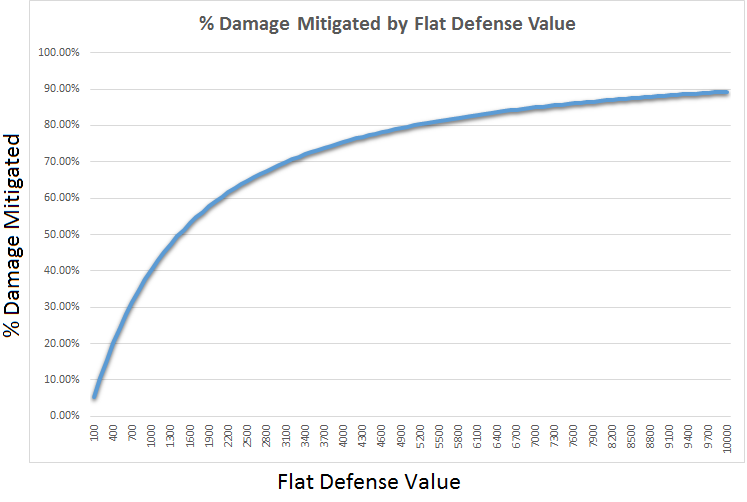 The great hall boosts stats everywhere! You should be using the medals you get from the arena to boost your stats in the great hall. You will regret not doing this sooner as you may have needed that extra 10 accuracy to land the debuff to complete that spider 14 level. So the order in which you want to concentrate on is accuracy, the defence then crit.

Don’t be fooled into thinking attack is the way to go because it’s a trap! Only a certain number of champions will benefit from it, I’ll go into more detail in the next point.

How to max your damage

Your champions will do damage based on if they do ATK, DEF or HP. You’ll see this by clicking on their abilities and it will say “damage based on …”. If the damage is based on the attack then any attack stats you have will directly affect that skill and no other stat goes into the damage output. However, if your champion does damage based on defence then any attack stats you build on that champion is pointless because it will ignore it and it will be wasted when you could have built more defence which would have lead to more damage on the enemy.

A common question we are asked is “how much accuracy do I need for …?”. Well, we are here to tell you! A rule of thumb you need to remember is the dungeon level x 10 = the accuracy you need to land the debuffs. If you are in PVP then it is all based on the resistance of the enemy so if you must hit it like a decreased defence then you should boost your accuracy as much as possible.
For Clan Boss here is a graphic showing some base stats required. 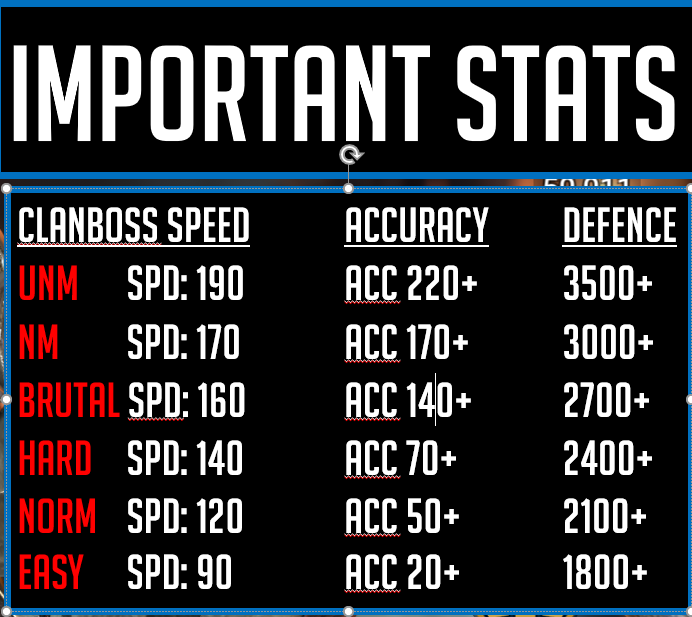 Some sets are offense such as stun gear so you need to attack the enemy to be able to apply the stun. There is only 1 chance to land per enemy it hits, a hit that applies 3 hits on 1 champion will still only have 1 chance to land the stun from the set!
On contrary, there are defensive sets such as frost gear which you need to be attacked to activate (if you attack someone in frost gear it cannot freeze them!). You need to learn how each set works to use it effectively so champs with provoke, will be useful with frost gear as you taunt the enemy and they then have a 20% chance of freezing the attackers.

Stun gear also works very well with AOE attackers because you have chances of hitting the stun on all enemies.

Player power doesn’t mean the strongest! Player power is based on how much Resistance and crit you have. As the game sees it as late-game so a good thing to notice is if you have to land debuffs aim for low player power because likely they won’t be able to resist it. But it has the high numbers isn’t something to fear when attacking in the arena.

If you wanted to boost your player power then you would just build resistance and crit but you won’t win the fight unless you have your basics down ASDD (Accuracy, Speed, Defensive stats, Damage).

The faster you go the more of a chance you beat your opponent and go first allowing you to weaken the enemy or even wipe their nuker in the team.

If you are lucky enough to have pulled a counter attacker or Ally attacker then the team placement is important before you go into a fight. Your champions will attack in the order of your champions starting from your leader. In Clan Boss, this is important because you can land important debuffs before the debuff bar is full and debuffs like decrease attack get missed! Speed is irrelevant when it comes to counter-attacking or Ally attacking.
See the order below:

Watch the video below for more detail! Happy raiding!