Raid has just released another FREE Legendary Login Champion, and this time around we’ve got Ronda!

Ronda is very clearly a promotional Champion who is based on a former Judo Olympian, UFC Champion and current Women’s WWE Champion, holding the Smackdown Women’s Championship at present… Ronda Rousey!

This promotion will run from November 30th through February 28th where you’ll be able to get your hands on Ronda for free by simply opening the game 7 times during this period.

It’s important to note, If you log in every day from today, you will be able to collect Ronda during the next Clan vs Clan tournament next week for a free 30,000 points!

Flaming Flurry
Attacks 1 enemy 3 times. Places an extra hit if the target has less than 50% HP after the third hit.

In Your Corner – Passive
Has a 15% chance to join an attack whenever an ally attacks an enemy. This Champion will attack with their default skill.
At the start of each Round, places a [Shield] buff on this Champion for 2 turns equal to 40% of their MAX HP. 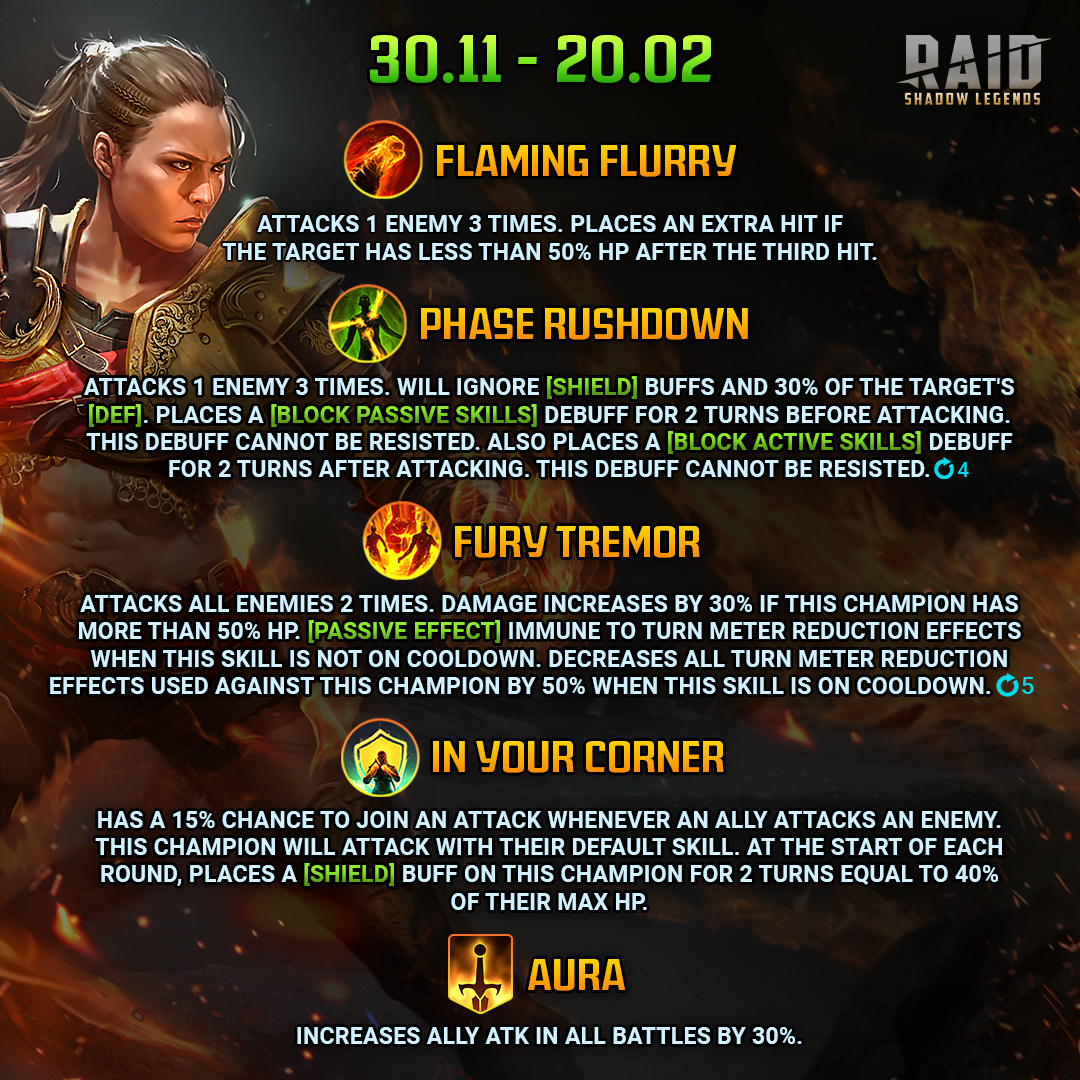 Who is Ronda Rousey?

Many of you may know who this Champion is based on already, but for those who don’t, we’re going to have a little breakdown here of who Ronda Rousey actually is, and what she has achieved in her very acolade-heavy career so far!

Ronda Rousey first became a big name when she burst onto the scene in the 2008 Olympics in Beijing, competing in Judo, and walking away with an impressive Bronze medal for her country, but since the Olympics, Ronda joined the UFC as the first-ever female competitor to sign with the company, entering the ranks as the Women’s Bantamweight Champion.

Of course, she had a very impressive stint while she was at the UFC where she became renowned for her signature Arm Bar, which saw opponents tap out within a matter of seconds at times, she became the first-ever woman to be inducted into the UFC Hall of Fame in July of 2018.

Shortly after this, her career diverted to WWE where she still holds the Smackdown Women’s Championship, so really her story is far from over.

Of course, we’re hoping Ronda bursts onto the scene as impressive in Raid Shadow Legends as she has done in her illustrious career, but for now, we will have to wait and see!

Let us know what you think of Ronda Rousey joining Raid Shadow Legends in the comments below!