Getting Ready for Clan Wars! How to establish, run and maintain a clan

Getting Ready for Clan Wars! How to establish, run and maintain a clan in Raid Shadow Legends

Phixion and Neva have started a clan! Follow our journey in this series to see the steps we take to help create and build our new clan, and to see how we progress!

(and yes, we are recruiting!)*

I’m sure everybody already knows the huge importance of being in an active clan in Raid Shadow Legends.

The rewards you can receive from the clan boss are so vital to any players account at any level. Making sure that you are in a clan that takes down the best boss that you personally can for maximum rewards every day is essential.

With the announcement of Clan vs Clan coming to the game soon, an active clan may be more important than ever!

A lot of players at this time will be trying to make sure that their clan is the right clan for them for the upcoming content, and we are some of those.

Formerly, members of a large cluster, we decided that our goals in the game were different from a large portion of the clan that we managed, along with several other members. We came to the decision that it was time to split and go our own way. It was time to create our own clan with our own goals as the key focus, take control and fill the clan with like-minded players to push ourselves to progress further into the game.

So the first decision to make was:

What is our focus for this clan? What are the requirements?**

Well, the answer was simple really, we wanted an active clan, of similar levels of progression in the game, so that we could push further together in preparation for Clan vs Clan.

We ended up gathering a base group of players for the clan, all capable of 2 keying Ultra-Nightmare Clan boss, and all very active players, and more importantly – friends.

The next big decision, was picking a name.. well, a decision like this requires a lot of thought when there are several opinions to consider, so we ran polls to find out what the crowd favourite was, and we went with it!

Once we’d figured all of these preliminary things out, it was time to make the clan! So we jumped into the new clan just after Clan Boss daily reset. (Of course, this was done with prior notice to the leader of our cluster!)

As you will all know, when you start a new clan, all of the clan boss difficulties are locked! So in order to begin killing the clan bosses that you are after you have to clear every previous level to unlock it – well, the great news is.. none of our clan boss tunes work on anything below brutal! So we had to figure out who to use to get the best results per key on earlier bosses to save on keys! (I never thought I’d see so much thought going into Hard Clan Boss from players who could nearly 1 key Ultra Nightmare!) But we made it, Day 1 – All the clan bosses were dead! 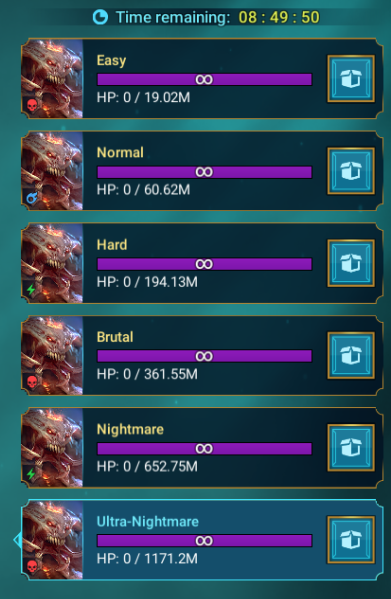 Now the next thing for us to do is to work on filling the clan with players who meet our requirements, recruitment is never an easy thing to do. Thankfully there are lots of very populated places to do this:

Make sure you stand out, maybe add a Clan logo/slogan that will draw attention to you, over others!

Official Raid: Shadow Legends Discord – There is a very active Clan search area in the Raid Discord server, where you can promote your clan, or look for Clans – but make sure you don’t ignore the posting rules!

Reddit: Reddit is a great place for recruiting, as it is incredibly active, not for all the right reasons at times, but it can be a very useful place to begin your recruitment!

Once recruitment is done, get settled in, get well acquainted with everybody and begin your journey as a clan.

* If YOU would like to get involved with our journey, we are recruiting and would love to see you alongside us. Disclaimer – Clan does not include your own, personal HellHades.

**Requirements:
Ultra Nightmare –  Minimum of 3 key for top rewards (the CB will be affinity for some)
Active daily in-game and on Discord

If this is something you’d be interested in getting involved with, please contact us via our Discord:
https://discord.gg/y6C79RXDRw