First of all, Merry Christmas and Happy new year to everyone in our community. We want to thank you all for making 2020 such an amazing year for the Raid: Shadow Legends community and the HellHades channel in general.

We thought in true Raid style it would be nice to share with you what we have planned over the coming months for HellHades.com! 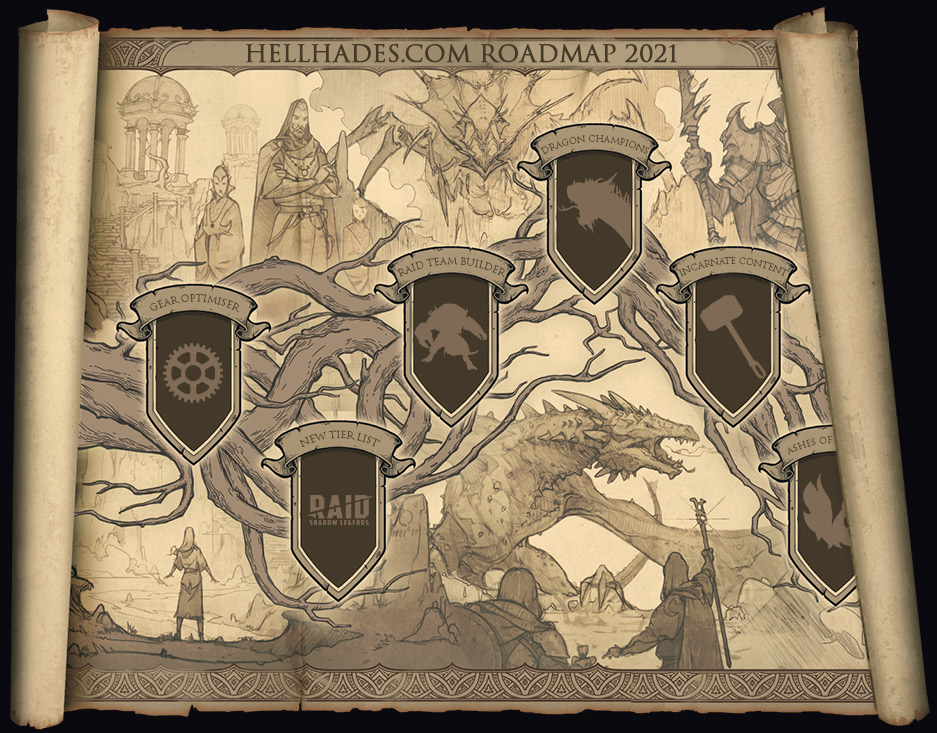 2021 is going to be a big year for Hellhades.com! We have been keeping things under wraps for a while and I know some of our viewers on twitch have heard mentions of something big coming!

Well, we are finally ready to reveal what we have been hiding!

We have been working closely with the developer behind the raid extractor tool that has been used to data-mine Raid Shadow Legends and helps people develop builds in the game!

Well, we are proud to say that together we have developed a product that will help you change the way that you play the game!

With this tool, you will be able to load in your champions and gear directly from the game, select the champion you want to gear, pick the stats you want to achieve and the tool will hunt through your gear to find the best possible solution!

As this tool grows we will also be able to highlight the best teams for areas of the game based on the champions that you own!

We will soon be starting the beta phase of the tool and will have more information on how you can get involved soon.

Within the new Raid Account Optimiser tool, we are planning to implement a team builder function that will help you to build teams for dungeons in the game.

This tool will help you find the best champions that you have from your pool to get through each stage in the game.

This feature is likely to come in a later stage of the build but is already in development.

Revamp of the Tier List
When we 1st launched the site we honestly had no idea how popular this feature would be on the website. We are happy to announce that we are going back to the drawing board with the Tier List and completely re-building it to perform better, give more search functions and be an all-round better tool for the community.

We have taken all of your feedback on board and are working with our developer to build a completely tailored experience for the Raid Shadow Legends tier list in early 2021.

Incarnate is coming in early 2021 and with the Alpha launching on December 27th we will be ramping up our guides and information on the site to help you make the most of the game.

We already have a 2nd YouTube channel dedicated to Incarnate so expect more content coming out there over the coming weeks and months as we get closer to launch.

MMO’s are a genre that is close to our hearts and we are excited to cover Ashes of Creation as the development gets closer to launch.

This is something that will be coming once we know more about the development process, however, you can expect to see guides and builds popping up as more information is released both on the website and on youtube!

These are just a few of the exciting developments that you can expect from HellHades.com over the coming months.

Once again, thank you all for your support – if you have any suggestions or feedback for the team please let us know on discord.

Have a fantastic Christmas and New Year! Here’s to 2021!