How Steven Sharif created his vision with Ashes of Creation

How Steven Sharif created his vision with Ashes of Creation

MMORPGs have been around for decades now. Our time spent with these games has been quite wonderful, providing us with a limitless amount of content, and allowing us the opportunity to meet and make friends from across the globe. However, since MMOs have remained pretty much the same throughout this time with little to no innovation. This is exactly what Steven Sharif and his ambitions have led him to do — revolutionize the MMO scene once again.

Ashes of Creation is an ambitious upcoming MMO title that will emphasize and integrate each player’s choices in affecting and defining the world. The structure of AoC’s world is quite dynamic, built in a way that it reacts to the players. The targeted degree of immersion for Ashes of Creation will even go as far as to affect the in-game civilization. In other words, the players will be responsible for creating the world’s history.

The Ashes of Creation Kickstarter went live back in 2017, with an expected goal of $750,000. And to no-one’s surprise, the project gained plenty of traction and achieved its goal very quickly. At the time being, the project sits at over $3 million’s worth of funding. In fact, the CEO and Creative Director of Intrepid Studios — Steven Sharif, has funded most of the project by himself. Steven made this possible through his involvement with a networking company responsible for selling fruit juice and vitamins, thus amassing a revenue of over a billion dollars in roughly four years. The company goes by the name of XanGo. 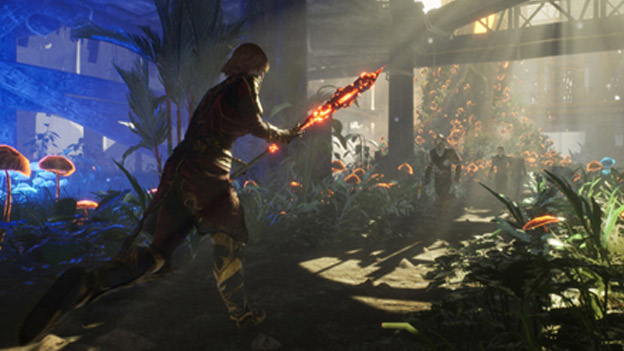 Evidently, Ashes of Creation and its goals have struck a chord that none of the MMOs could in the last two decades. As Steven states himself, the game will be balancing the quests with unique sandbox mechanics, making players the developers of the in-game world. He continues to point out the mindset required for innovation and creativity. Many publishers, if not all, demand development teams to “Create the next WoW” for them.

Sharif and Intrepid went with a different tack, considering the team has no obligations to do whatever they want with the game. Sharif aimed for a design that registers each player’s actions as they move through the world, recording actions such as killing monsters, harvesting, crafting, completing quests, and much more. While the players continue to gain experience from such activities, the game’s node grows as well, progressing and leveling up in set phases.

Sharif also insinuates how leveling up the nodes will result in more emerging mechanics, like the appearance of bosses spreading chaos across the established villages/nodes. And even better, Steven Sharif looks forward to introducing natural hazards, like earthquakes and volcanoes, as well.

Needless to say, from one dream to another, Steven Sharif aims to accomplish feats not done before. Steven shares how Neverwinter Nights was seemingly his first MMO, and he states how the concepts and ideas implemented back then were also considered rather risky and impossible. And what Neverwinter Nights established in 1991 continues to be used to this day. Therefore, Steven and Intrepid Studios aim to burn it all down, and create something new and unique from the ashes.