Plarium has just dropped the information of the upcoming Fragment Collector, Walking Tomb Dreng who is an unmissable Fusion Champion. His kit is extraordinary, and he will see use in even the most end-game accounts for things such as Hydra Clan Boss, Spider and Doom Tower.

Because Dreng is the ONLY Spirit Affinity AOE HP Burn Champion in the game, he will be invaluable for players who are still progressing in the game, helping them get past known roadblocks such as Spider 19.

What an incredible addition to the game!

Walking Tomb Dreng is an HP-based Champion that will help you immensely with progressing in PvE content, mainly Spider’s Den, HYDRA, and Doom Tower Bosses levels. So let’s see what he’s got in his kit.

With A1, he hits an enemy twice and activates any HP Burn debuffs that might be on the target.

Using A2, he attacks all enemies and places unresistable HP Burn on them. So, you basically don’t need any Accuracy for this Champ.

Dreng’s A3 will help you keep your team alive, as he will balance the HP levels of all allies, bringing them to the level of the ally with the highest HP. After that, he will attack one enemy.

Depending on the correlation of the target’s current HP to Dreng’s, he will either ignore 30% of the target’s DEF or decrease the cooldown of his own A2 by 1 turn. So, if you have an enemy whose current HP is equal to or lower than Dreng’s current HP, he will ignore 30% of this enemy’s DEF; and if you have an enemy with a higher current HP, Dreng will reduce the CD of his A2 to get back to being able to place that unresistable HP Burn faster. This will be extremely helpful against Bosses who always have a huge amount of HP.

With the help of the Passive skill, Dreng will reflect 30% damage when having 50% HP or more. Once his HP drops below 50%, he will deal 30% more damage instead. So, with the combo of his Passive and A3 skill (with the Ignore DEF part), Dreng can also hit reasonably hard.

On top of that, he has an HP Aura in all battles.

Exalted Pyre – Cooldown: 4 Turns
Attacks all enemies. Has a 75% chance of placing a [HP Burn] debuff on all enemies for 2 turns. This debuff cannot be resisted.

Aura
Increases Ally HP in all Battles by 30%. 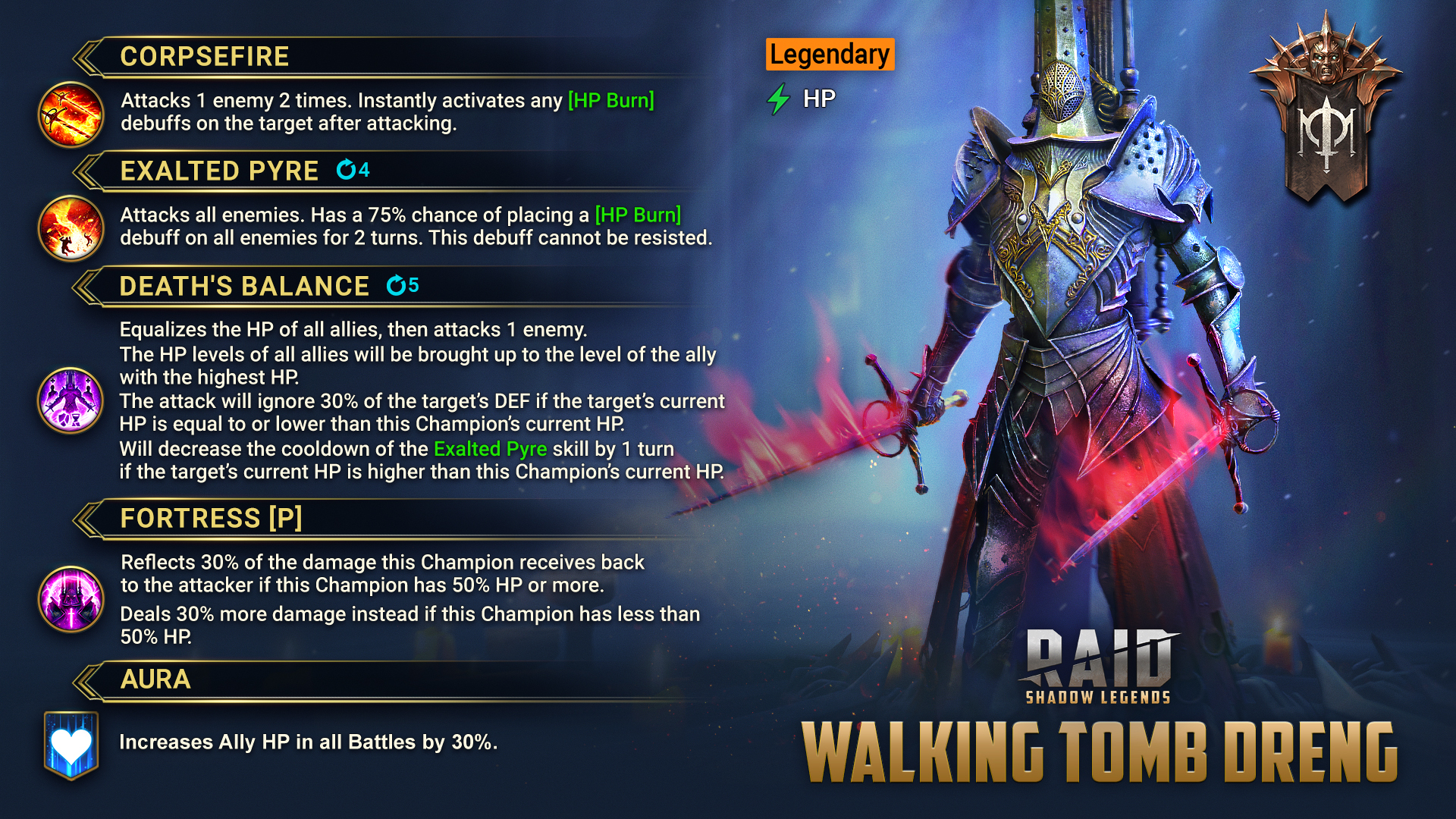 Will you be going for this Fragment Champion, we sure will be! Let us know your thoughts in the comments below!