The new patch 4.30 is live so make sure you read it carefully as there is a lot going on!

This update brings improvements to some existing features, along with a few quality-of-life improvements – but the real meat of this update lies in newly added Team Setup options: Saved Teams & Skill Instructions. Here’s everything you need to know:

When in the team selection interface before any Battle, hit the “Team Setup” button to create Saved Teams of Champions and give those Champions Skill Instructions.
You are able to create two groups of Saved Teams – one for PvP Battles (like Classic Arena and Tag Arena), and one for PvE Battles (such as for the various Dungeons). You can save up to 10 Teams in each of these groups. 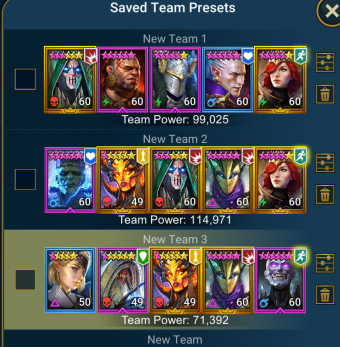 Skill Instructions work by allowing you to override the default AI prioritization of a Champion’s Active Skills, so that when playing on Auto, your Champions use their Skills in the order you want them to. Here are the priority options:
Those are the main priorities, and they can be assigned to any Active Skill – but they can’t be assigned to Default Skills or Passives.
However, there is an additional instruction that will supersede any other instructions for a single turn – Opener.
It can be assigned to any non-Passive Skill (including Default Skills) along with any other Instruction. For example, a Skill can be set to both “Don’t Use” and “Opener”: in which case, that Skill will be used on that Champion’s first turn, but will then be ignored throughout the rest of the Battle and will not be used again.
Note: You can only give Skill Instructions to Saved Teams and to those Champions Set in your Arena Defense Teams. Check out the in-game guide (hit the “i” info icon within Team Setup) for more details and a full breakdown of both Skill Instructions and Saved Teams.

Playtime Rewards will now change depending on your Level.

Game Experience Enhancements and other fixes