So here it goes, it’s time to dive into our first bit of in-game content, to begin preparations for our team building.

At the beginning of our journey, we only had 2 Factions left to complete, the first being stage 21 of Knight’s Revenant and the final 4 stages of Shadowkin. So, we weren’t far away from getting Lydia, but it could still pose a threat.

First, we decided to eliminate the easier stages (18, 19 & 20 of Shadowkin) and to do so we used the team optimiser to help us pick the team that we would be running, which you can access at the top menu of the Optimiser page.

After selecting Shadowkin and allowing the Optimiser to suggest teams, we had a ton of options, but for stages 18-20 we decided to go with what we had ready, which was very similar to one of the suggested teams which you can see below, except we swapped Toragi the Frog for Kyoku.

Elvo took the lead on this one, and got it done with relative ease, albeit a long run he smashed it out very quickly, using the team that you can see below, which was also suggested in the Hellhades Team Optimiser.

Sinesha was built in a fast stunset, with damage integrated in her build, as well as decent defensive stats to ensure she would survive, whilst the rest of the team were built in full support builds except for Bystophus, who was purely built as the core damage dealer for the team.

The boss becomes significantly easier with Tomb Lord as the damage requirement drops a lot as his poisons are bringing huge chunks of damage, it mostly came down to surviving the boss.

Wave 2 is probably the biggest struggle in Knight’s Revenant faction wars as the Valkyrie’s can really cause you issues, which is why the control effects from the team including Sinesha’s stun set really come in clutch.

We had to change things up a little for the Shadowkin team that we had used prior to stage 21, as surviving the boss without a reviver was a slight problem, so as planned (as you can see from our previous article) we would be using Toragi the Frog instead of Genzin, giving us additional survivability instead of extra damage.

Having Toragi the Frog allowed us to not only control the waves further to ensure we went into the boss fight with full health and cooldowns available but also gave us the ability to rotate ally protection buffs from himself and Kyoku during the boss fight so that Jintoro would survive the hits as they ignore defense which can quickly lead to a dead DPS.

This was the only challenge of Shadowkin, just making sure to keep Jintoro alive as he was built purely for damage, with enough accuracy to land his turn meter steal and defense down/weaken abilities.

Ninja quickly tore through the boss with his A2 allowing it to be a quick, easy run and securing Lydia for the account.

The only Champion in this team that was built for damage was Jintoro, the remaining Champions were built purely for survival stats, with accuracy and speed to land their respective debuffs, including Ninja, who was in Relentless.

This did take two attempts, as a mistimed ability cost Jintoro’s life when the boss was around 5% health. 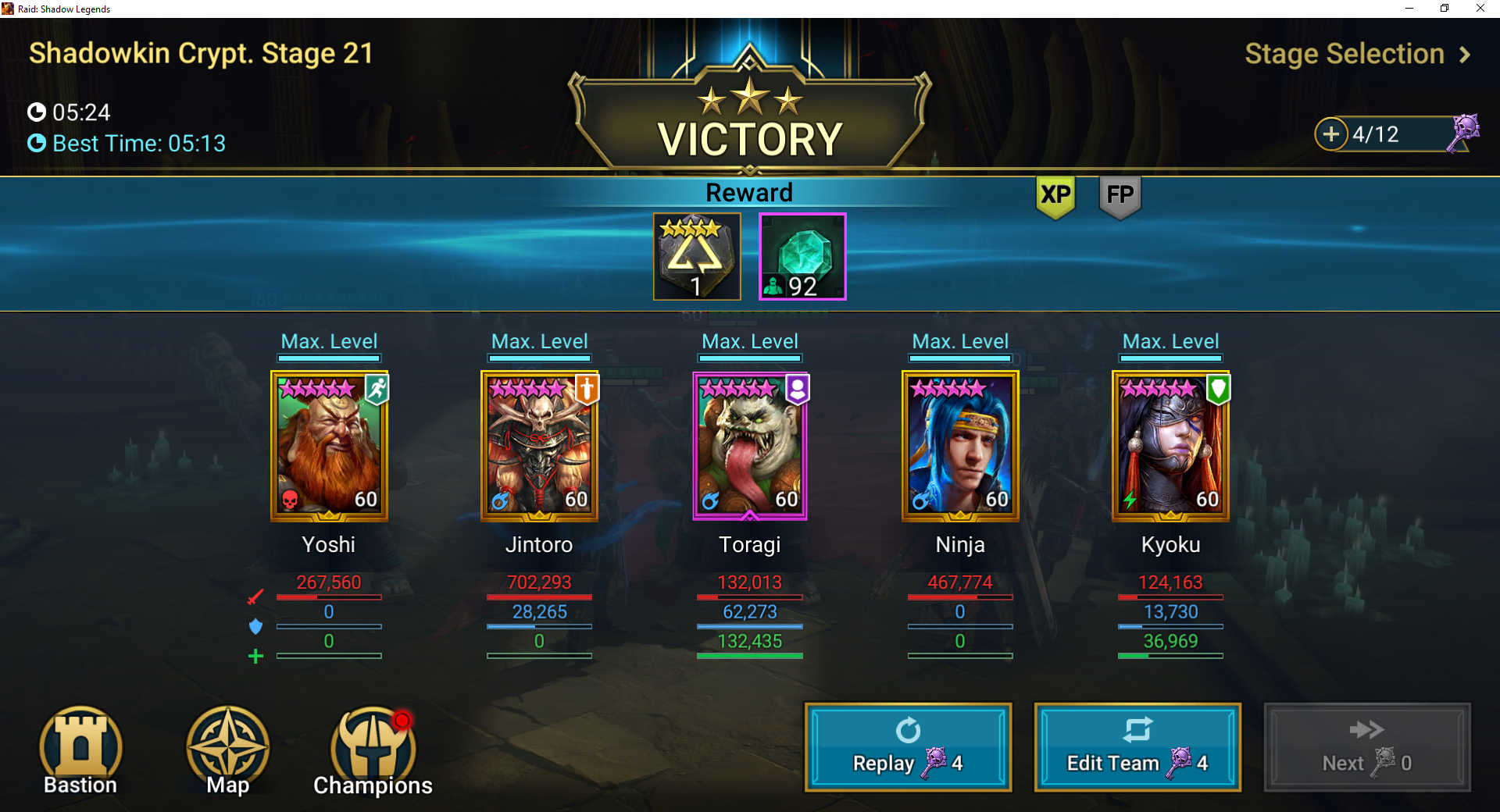 And there we have it, Lydia the Deathsiren is now on the account, allowing us to move into the team building stage of the account as she will feature in nearly all dungeon teams and a core part of our Doom Tower Teams.

Stay posted for our next update where we’ll begin building teams for different areas of the game!