Arena – Check! our arena team is making its way back to gold 5, we are currently in Gold 3

Clan Boss – Check! Our Myth-heir comp is working great, and it is so close to a 1 key, just a few more tweaks and the 1 key will be ours

Spider dungeon – Check! Its working brilliantly on average 40 second runs and not a failure in sight.

So, we have the arena rolling, Clan Boss bringing in the shards, gear and books, and Spider racking up the silver for us. Next up is Dragon, we need those beautiful artifacts we get from that dungeon and since we don’t really need to worry about tournament points or energy efficiency at the moment. All we want is the best chance to get the best gear, So, we are going to build a Dragon 25 team.

Into the optimiser I go and select dragon 25 and suggest teams. I was really interested in building poison exploder team as I have never built one before and I wanted to build one that wasn’t too hard to get going

So, I chose the Tomblord with Elenaril, double taurus and Kymar team. Its easy enough to build only Tomblord needs to be built well.

The speeds are low enough plus I don’t have to re-gear Kymar as we works just fine in the arena build, he is already in, speaking of builds lets move on to building out these champions

Copy to Optimiser button is pressed and I didn’t use the stats that this person has used as most of the time the builds are overbuilt and are out of some peoples account capabilities, so the recommended accuracy button was pressed on all builds bar Kymar of course. I set them all to balanced in the optimiser with a tick on the accuracy slider as we want Elenaril and the double taurus’ to die at the dragon, so I am only worried about getting the speeds and the accuracy we need.

Tomblord is a different story, survivability is selected in the optimisation goal, and we need him in Regeneration gear.

After a few minutes, the Optimiser gave me these builds and they will do very nicely

Now I have the builds I equip the gear on the champs, and I am good to go.

It is also a suitable time to point out that only Tomblord has masteries. Both Taurus have their A3 booked to the increase chance to poison that’s all, Elenaril and Kymar have no books and Tomblord has his A2 increased chance to place poisons.

The only thing I need to do before I test run this comp, is to make sure everyone does the right thing at the right time. Or in other words AI settings.

Once you’ve set the following AI settings, it’s time to test a run! 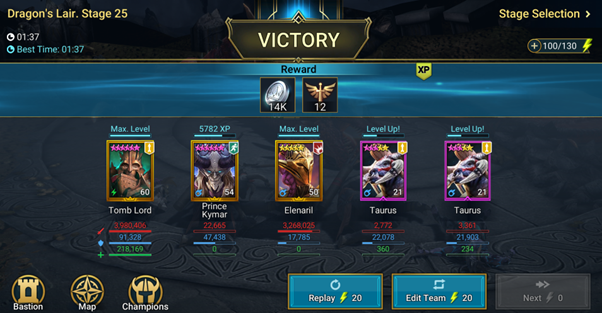 And BOOM!! All done easy as you like. This comp is all about the synergy that all the champions have together. Everyone doing their jobs perfectly. Ran this team for the rest of the day and the only time it failed was the dreaded 3% that we all fear! All in all, this team was easy enough to build and get going. The only sticking point players maybe is they don’t have good enough regeneration gear. But as you see in the build above for Tomblord we are not talking crazy numbers here 50k HP, 2.2k def with a nice bit of resist and accuracy. Very achievable with some lucky rolls

If you are enjoying this series, let us know down below we love hearing from you!