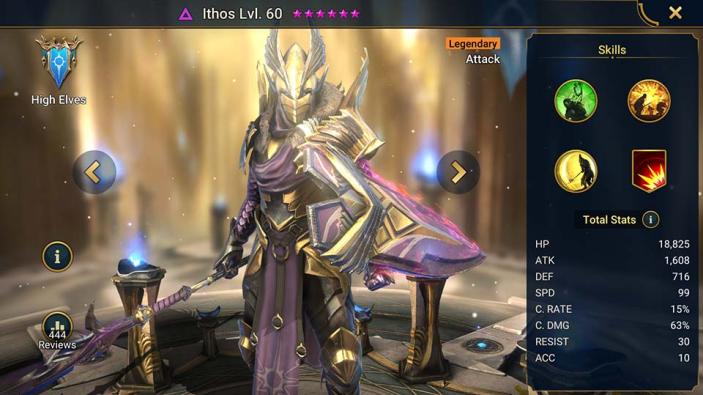 Ithos carries around the most pointless shield in the entire game! She is a glass cannon and that shield may as well be made from paper. He is a Void affinity legendary from the High Elves faction. Ithos is one of the hardest hitting AOE champions in the game and the fastest champion to be able to clear Nightmare campaign stage 12-6 as a high-experience food farmer.  Ithos is also one of the best champions in the game to help clear waves leading to a boss, particularly strong in Ice Golem, but also Dragon and Fire Knight too. Some of the world record times in Dungeons are because Ithos is smashing his way through waves. Best built ignoring accuracy, just pushing high speed, crit, crit damage in Cruel or Savage gear if possible.

He has a weaken on his a2 but don’t waste resources and don’t sacrifice Accuracy to get this debuff out just focus on making him the best Nuke you possibly can!

General PvE
Campaign Farmer
Offense
Defense
Support
Offense
Defense
<img title="Cycle of Revenge - Has a 50% chance of increasing the Turn Meter by 15% when an ally is attacked with a critical hit. Will only increase the Turn Meter once if an ally receives multiple critical hits from a single Skill" alt="cycle-of-revenge" class="lazyload ignore-lazy" src="data:image/gif;base64,R0lGODlhAQABAAAAACH5BAEKAAEALAAAAAABAAEAAAICTAEAOw==" data-orig-src="https://hellhades.com/wp-content/p