How to cleanse your Artifacts in Raid Shadow Legends

Gearing your champions is probably the most important thing you can go to progress in Raid: Shadow Legends. You can have all the champions in the game, but you will not get very far without the gear to match the champions. So, you set your team and you grind away farming Dragon and Fire Knight, your storage is full and your inbox is full, and you don’t know what is good and what is bad. Enter this guide.

First things first the most basic thing you can do to make space is sell anything with flat stats as their main stat from the bottom row (gloves, chest, and boots) are sold. With the exception of the speed set when it has multiple rolls into the speed sub- stat. these can be used on your speed lead in arena and boots 99% of the time need to have the main stat of speed. However, this will drop off the further you progress, and you will find yourself selling everything that has a flat stat main stat.

And more so, anything that is 4 star and below is not worth keeping and in addition to that, anything less than a rare is an instant sell too. Flat stats are bad, with the exception of HP as flat HP is a big number compared to Def and Att.

HP% Gloves need Speed, and very often you will want to land accuracy on these too, aside from this – a good mixture of defensive substats such as Resistance, Def% – Ideally dodging damage-based stats. 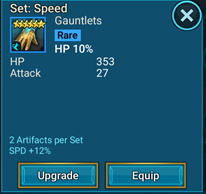 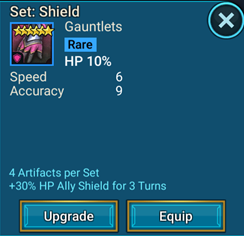 Attack gloves don’t really have a place in the game, they are only used on bomb champions and who uses bombs anyway, lol, however, for super end game accounts attack gloves can be used when you have gear that can get the required crit rate and crit damage elsewhere. It’s good to keep a few, not many, of these in the damage sets like attack, cruel, crit damage and savage and you are looking for speed and crit rate as substats. 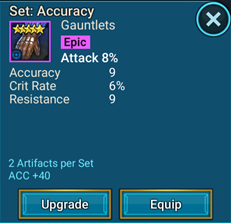 Defence gloves you are looking for the same as HP gloves. 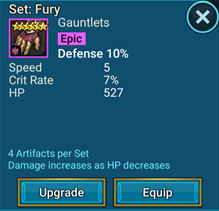 crit rate gloves you are only looking for a mixture of all the good stats the less flat stats the better. Later on in the game, you will find crit rate gloves are leaving your damage champions as they move onto crit damage gloves. So, build for the future and keep crit rate gloves that have good survivability stats 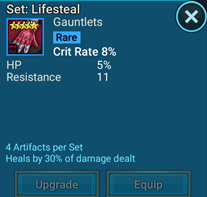 Crit damage gloves are for your damage dealers only. So, you are looking for crit rate always if it doesn’t have crit rate sell it. You can be a little more lenient with them on the major damage sets like savage or cruel if you have speed and the percent stat you can find the crit rate in other places however if you dedicate that these need to have crit rate. It eases the burden on the rest of your gear. The only exception to this rule would be if a champion didn’t need 100% crit rate like Coldheart 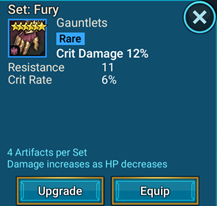 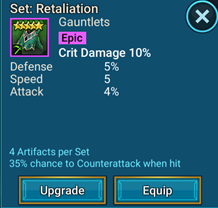 much like the gloves, you are looking for survivability stats however, the chests are a little different as they are used on your HP and DEF damage dealers as well. The one this you don’t want is attack percent or flat attack on these. As attack is a counterproductive stat to the main stat. the one caveat to this is if you have a champion like Mountain King who gets value from HP and attack. 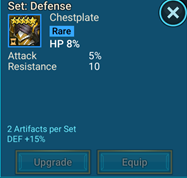 But ideally you want a chest piece with a mixture of crit rate, speed, acc and the percent’s that compliment the main stat. 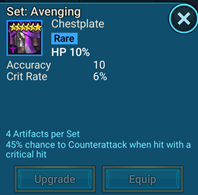 Attack chests are the easiest to sort through all you are looking for is the good substats ideally crit rate and speed nearly every attack chest can be used on your attack champions as long as it’s not all flat stats. 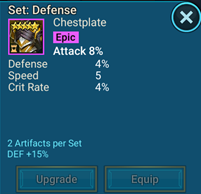 These chests operate in similar ways for different reasons. Accuracy chests can be used on nearly every support champion in the game as we always need accuracy to land our debuffs. Resistance Chests are used in situations where you want to prevent the enemy from landing debuffs on you, this can work in certain situations in Arena and Doom Tower mostly, where the resistance requirements may be higher than your standard build. Due to the situations where you’d use these, more commonly than not, you’d require a rather high speed for these builds, so having Speed substats is a great addition to a strong resistance chest. However certain builds such as a Stoneskin arena Champion would actually benefit in having resistance without the speed. accuracy chests need the good substats only 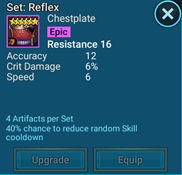 99% of your champions need speed boots, it would be very rare that you would have HP Def or attack boots on a champion. It can happen in the end game when you are able to find the speed in your other gear. So, it is good to keep the HP, DEF and ATT boots that have speed on them. 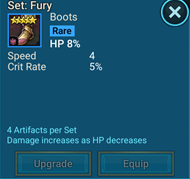 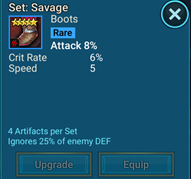 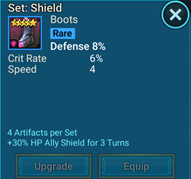 For speed boots they are so rare and hard to come by, it would be a rare thing to sell them especially 6-star ones.

That is the bottom row of artifacts done, lets’s move on to the top row.

I am going to treat them all as the same as the main stat don’t change. The one thing you need to keep in mind is that a weapon cannot have defence stats on them and a shield can not have attack stats on them. Generally speaking, all you are looking for is the main good substats like speed, acc, crit rate, crit damage and all the % on Att, def and HP, try and follow HellHades mantra ASDD (accuracy, speed, defence, damage)

A more indepth look at this we will go through the rarity of the gear.

Rare items if it has a flat stat, no matter what the other stat is it’s sold. 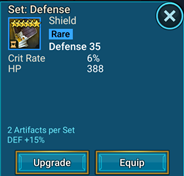 The only reason you would keep a rare item with a flat stat on them is if you are early game and it’s the speed set and the other substat is speed. Roll it to 8 and hope for a speed roll. 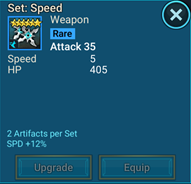 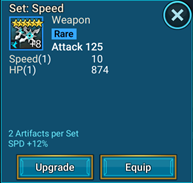 There is not much more I can say about the top row of artifacts.

You need to pay attention to the set bonus’ of each gear set and tailor the substats to them, for example, the HP set you want HP/DEF with speed and accuracy on them. The attack stat is useless on these pieces. There are certain sets that you want particular stats on them and some sets that you don’t want some stats on them. Like damage sets like cruel and savage you want damage and survive sets, immortal and shield, you want survivability. Let’s go through a few niche ones.

Sheild set: the shield set is a niche set at best and can be used to great effect against the scarab boss and in seer comps. The shield set gives the wearer the ability to give everyone on your team a shield for 3 turns equal to the wearer’s max HP of 10%. Therefore you want as much HP on your gear as possible. So Attack is a useless stat for this gear set and you should not keep any that have it. Unless it can be used as an off set-piece. But the stats would have to be amazing

Likewise, the regeneration set heals the wearer by 15% every turn and is used most commonly for some solo comps like Samar Gemcursed fighting Bommel and it pairs well with the Immortal set.

The Stun Set is a must for nearly all of your Faction wars teams. Find a good champion that has either an AOE A1 or more than one AOE ability and they will help you get through those pesky stages. Here is a link to an article talking about each faction and stun sets.

Once you have cleared out all the gear that you don’t want to keep. Now you find yourself in a position to roll, said gear, this can be quite tricky and it all depends on what you need for your account, however, here are a few tips for you to get you started.

All ways roll your Rare gear to 8 and if it rolls well roll it to 12 looking for that next stat. if the next stat is a flat stat, you need to start considering that you need to sell this. Flat stats are not good.

For end game rare gear is rarely used, the rolls would need to be double into the desired stat for you to even consider keeping it.

Epic and legendary gear you should roll to 12, to see the max potential of the piece. If it doesn’t roll a double roll at least. It should be sold at an end game level, and if you are earlier than the end game it depends on what it rolled into. You shouldn’t have any flat stats or at least have only one flat stat at this point so if it rolls into that stat it’s sold if it’s a single roll into each stat. the same is for legendary gear. The only difference between rolling the epic and legendary is you know the fourth stat.

The last thing I want to briefly mention is substat starting rolls. As you can see in the graph below the starting stats vary, and regarding what to keep and what to sell. If you get a five-star epic artifact with attack percent, defence percent and speed but they are all at 4 this is the worst starting rolls you can get in the game and the piece should be sold. One 4 is ok but two or more it is just not good enough. 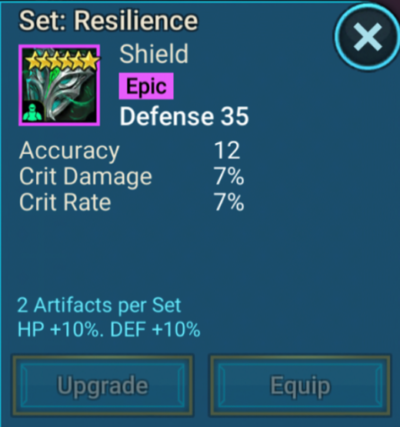 And that is it, artifact gear cleanses in a nutshell, I hope this helps you clear out the unwanted gear on your account and you are only left with the best gear for your account. Let us know what you think and comment down below, We love hearing from you!