In a recent video, HellHades address this as it is always a concern for us as a company along with the player base. Common sense tells us that as a company that employs 7-10 full-time members of staff, whose primary content is based around Raid Shadow Legends, we need to be on the ball with the performance of the game to ensure our future stability. We spend countless hours each and every day paying close attention to the numbers and statistics surrounding the game, our websites, YouTube channels, and social media to monitor our growth, along with the stability of the game as a whole.

Historically with most online games, those who voice their belief that gaming is seeing a downturn are more a reflection of their own personal experience or feelings towards a game, rather than the actual hard facts associated with it.

We do not take this approach. When it comes to evaluating how our content and exposure are growing we look at the overall picture, not just how we are performing on one set platform. It is more than possible that, for example, Twitch views seem down. This does not mean that the game is dying, this simply could mean that the interest in stream content is just not there right now.

When we look at engagement across the board, something that we are very lucky to have access to, along with public information that can be found on websites such as Twitch Tracker or Social Blade you get a far more realistic look at the numbers and how the game is being received across the web.

Another thing to keep in mind with a game such as Raid Shadow Legends is that the percentage of players that voice their opinions and involve themselves in things like twitch chats and YouTube views is actually only a very small portion of the overall player base. Raid Shadow Legends’ biggest audience, by far, is the players who strictly play on mobile in their spare time and occasionally pop into videos or read online guides when they get stuck on something in the game. These are the “casual” players that make up such a huge portion of the community for the game that maintains the stability of the game along with the new players who join the game.

So does the release of games like Diablo Immortal impact the Raid Shadow Legends player base?

The short answer to this, and from what we can see with the growth of the game over the past few months is simply no. Raid Shadow Legends appeals to a completely different audience than Diablo Immortal and with many Raid players already limited in time that they are able to spend playing the game, a game that requires constant user input with no auto-farming functions is not likely to impact the overall player base at all.

Diablo Immortal is not a casual (or wallet) friendly game. In fact, many PC players from the Diablo PC community have exiled themselves from playing the game on the bases that it is like a PC game in terms of the required time investment, however, fuelled by a mobile games monetization structure.

With the pay-to-win argument aside we have seen little to no impact on Raid from the release of Diablo Immortal and with Raid Shadow Legends being the biggest game in Plariums arsenal we can’t see them taking their foot off the pedal any time soon. If anything, we are seeing a drastic increase in the number of new players that are coming into Raid Shadow Legends with the release of Deliana as a new promotional champion that rivals, and even outweighs the impact of champions in the past such as Ninja or Alexander. 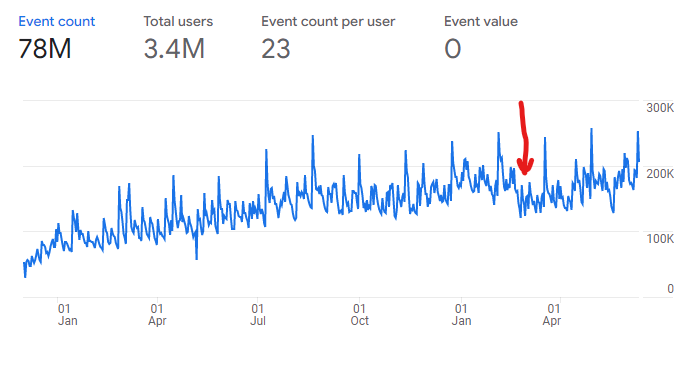 Overall since 2020 when we launched hellhades.com we have seen 1 dip in users on our website and YouTube channels that have since recovered and that was in Feb 2022 when the Russian government went to war with Ukraine.

As many of you may know, Plarium and Raid Shadow Legends were based out of Ukraine so during those first 2 weeks, there was a lot of uncertainty about the future of the game and more important concern for those developers affected by this crisis.

However, thankfully, we can see solid growth and improvement since this date, and steadily we have returned to the numbers that we were seeing before this event with all indicators pointing towards the continued growth of the game over the coming months.

As a company, we are fully behind the development and content that we provide in Raid Shadow Legends and as always we will continue to create the most up-to-date and insightful solutions to help the community grow. In addition to this, we are also expanding our reach to cover other games that we feel the community may find interesting, such as Diablo Immortal and Arclight Rumble.

Arclight Rumble (although not released yet) will be Blizzard’s take on the Clash Royale genre and although it again will not compete directly with Raid Shadow Legends, it should be closer to that market as it will act as a solid pick-me-up mobile game that you can play as and when you have a few moments to jump in and have some fun. We feel that although this game has a lot of potentials, it is different enough from Raid Shadow Legends to justify it being on its own Youtube channel and website dedicated to providing information for players should they be interested in that game when it is launched.

Overall, we have said it time and time again but try not to listen to the buzz around social media on how Raid is doing, the facts are that Raid is doing great! The content in development in the game is looking amazing and the continual addition of new players into the game proves that the game is here for the long haul.

If you would like to see HellHade’s take on the future of Raid Shadow Legends and how it is impacted and compared to games such as Diablo Immortal, Awaken Chaos Era, and Summoners War then be sure to check out the video below. We hope that this post cleared up some concerns that the community may have had around the future and long-term playability of Raid, and we can honestly say that Plarium is barely scratching the surface when it comes to the potential of the game. So it should be an interesting few months coming to players in the game very soon.

If you have any thoughts or feedback about this article and would like to share, please take a moment to comment below and let us know your opinions.