Our Content Creator Neva put together this guide to how he tackled Demon Spawn 21 Faction Wars, a massive shoutout on this tactic goes to Manibal & Azazzel for their Faction Wars series.

Demonspawn can be a very doable faction, depending on the champions you have, certain champions make it significantly easier, for example, Duchess Lilitu and Umbral Enchantress, but for those without those champions – they will find stage 21 a complete roadblock, I am one of those people.

But thanks to the video released in Manibal’s Faction wars series, a ‘cheese’ for this was explained using Alure(s) and the farmable rare, Diabolist – preferably in a stun set, to prevent the enemies from ever getting a turn – this is by no means a ‘FARM’ team, but more of a means to getting 3 stars on the stage.

As someone who is actively pursuing their last stars for completing Faction wars to receive Lydia, Demonspawn was one of my final 3 stages to finish – and I was very stuck for options, due to not having an Umbral Enchantress or Duchess, so I decided to look into the cheese tactic but could not find any exact information for stat requirements, or even – how to do it, the only visible display of it was a clip using 3x Alures, Cruetraxa and Infernal Baroness – showcased by RaidRush.
After a few days of heavily searching, I couldn’t find any video evidence of this team with the setup I was looking to use of 1x Alure with 3x Diabolists + 1 DPS, so decided to wing it to the best of my ability.

Diabolists – my aim for the Diabolists was to make sure they took 2 turns for every 1 turn the enemies in the waves took – the fastest champion was Valkyrie with 104 speed, so I needed a minimum of 208 speed on every champion in my team to achieve this and keep maximum uptime on stuns to allow me to get through the waves. They each also needed 250 accuracy, although with Alure and her 50 ACC aura for Faction Crypts, making the requirement easier to reach as you will only need 200.

IMPORTANT – YOUR DIABOLISTS MUST BE BOOKED ON THEIR A2 AND A3.

For Alure – I knew she had to be fast, for the boss wave to ensure it did not take a turn, but I also needed to gear her with 100% crit rate to make sure she always decreased turn meter with the A1 ability, her damage didn’t matter but due to her being 100% crit rate, any additional C.DMG would come in handy, so I used her at 273 speed, 100% crit rate and around 150% C.DMG – this speed is probably not required, anything around 240+ would probably do just fine due to the constant speed buff + turn meter boosts from your Diabolist army! Alure also needs 200+ Accuracy to land her Turn meter drop, alongside her +50 ACC FW aura.

Flex spot/DPS – For this, I initially invested in Excruciator, as that was who was mentioned in the initial video, however, wave 2 was very RNG and basically required landing a stun on all 5 enemies, which was increasingly hard due to the Valkyrie Passive preventing me from freely using Diabolists AOE + Speed buff, so I swapped out Excruciator for a Kymar – running a shield set too, just to help get the perfect setup in wave 2. I geared Kymar very similarly to Diabolists, with enough accuracy to land poisons with his A1, and to strip buffs with his A2 in an emergency.

This was not a ‘quick’ nor easy run, it took a lot of careful planning with abilities, especially on wave 2 – to ensure that Valkyrie never got to use her shield skill, and bad RNG with stun set played a huge part in failing a run, This took several attempts before completing it, as expected, and even in the run I did complete with 3 stars, several things went wrong – so just have patience.

I hope this helps others who are in the position I was, with little hope of completing Demonspawn and edging closer to getting their Lydia, and hopefully will save you lots of resources building other champions to no avail.

Here are the builds I used to complete this:

Diabolists – No Masteries – All fully booked 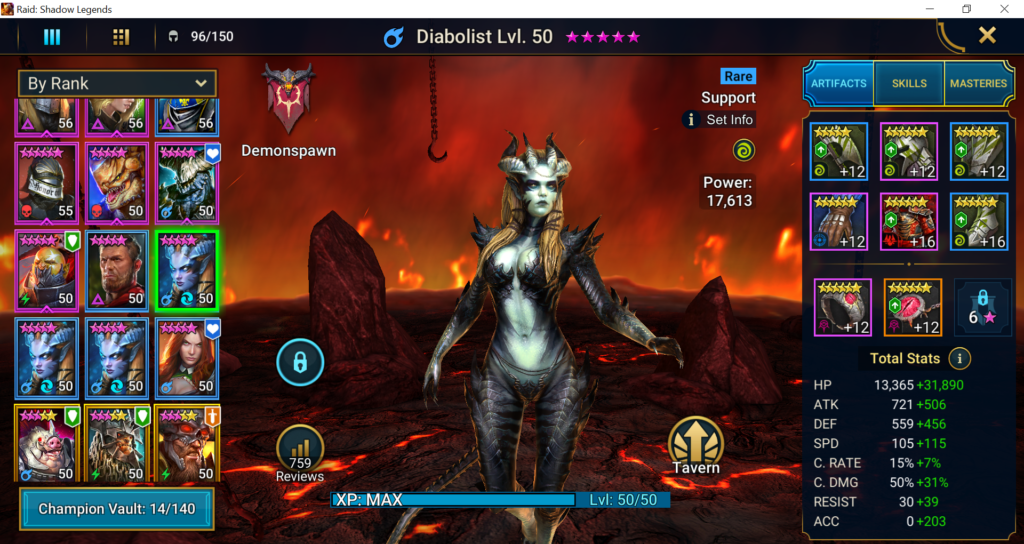 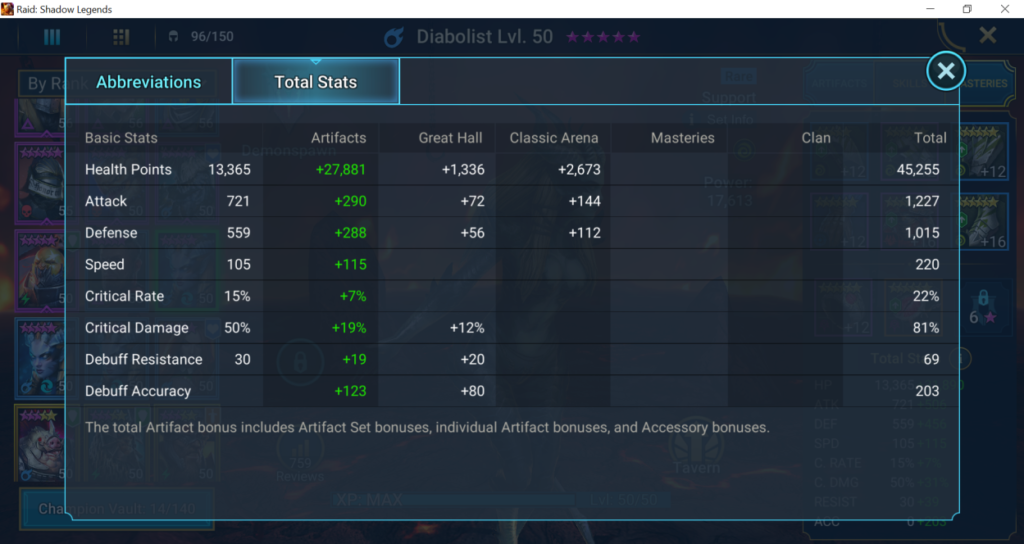 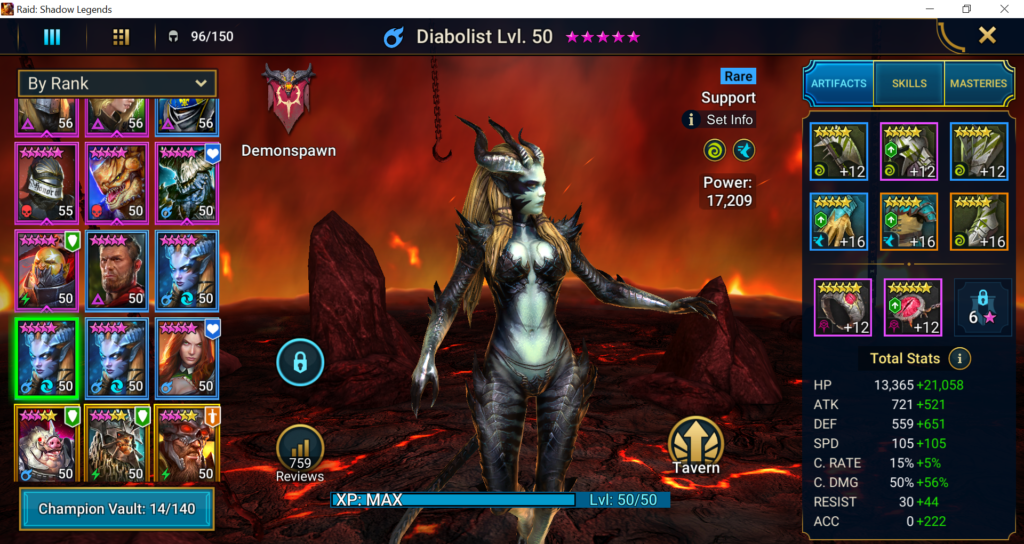 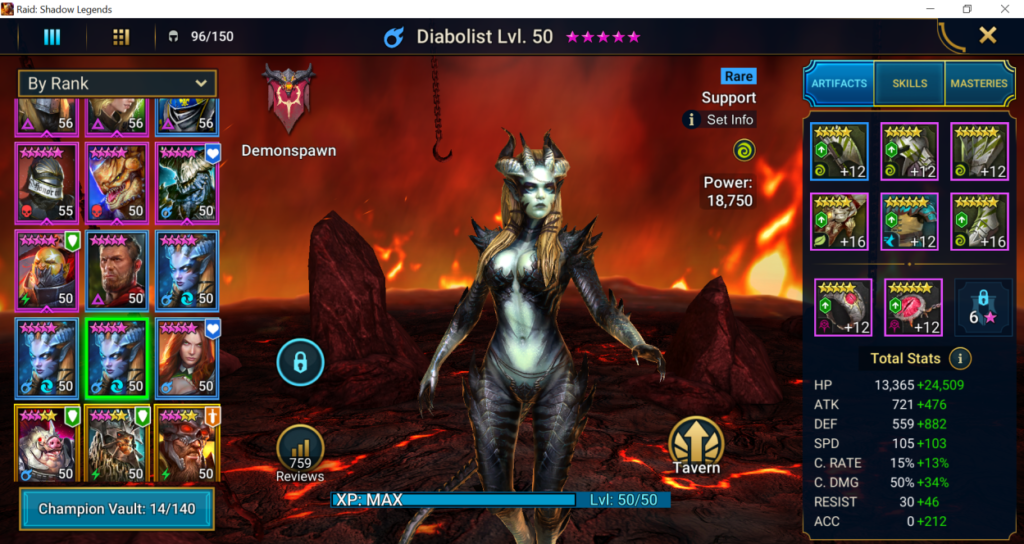 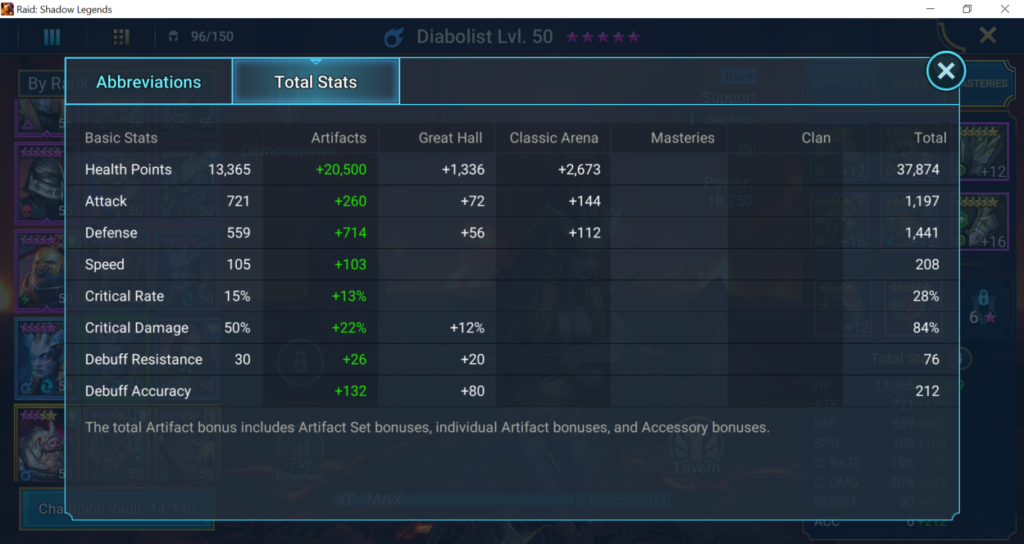 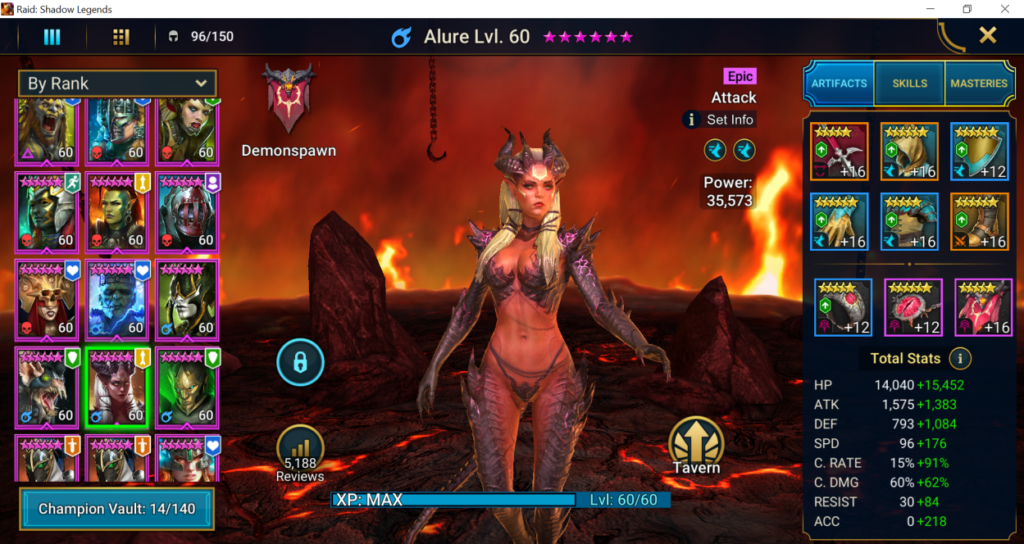 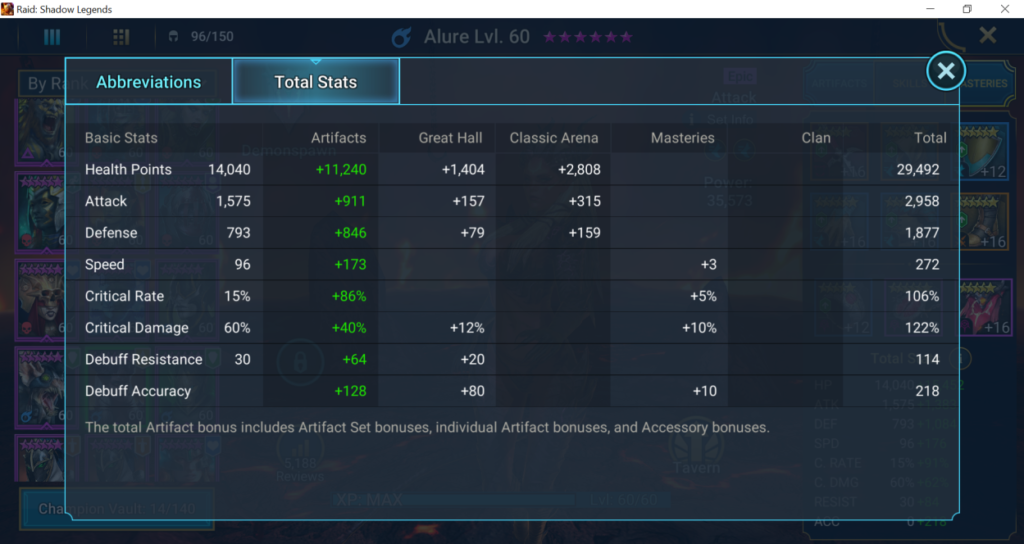 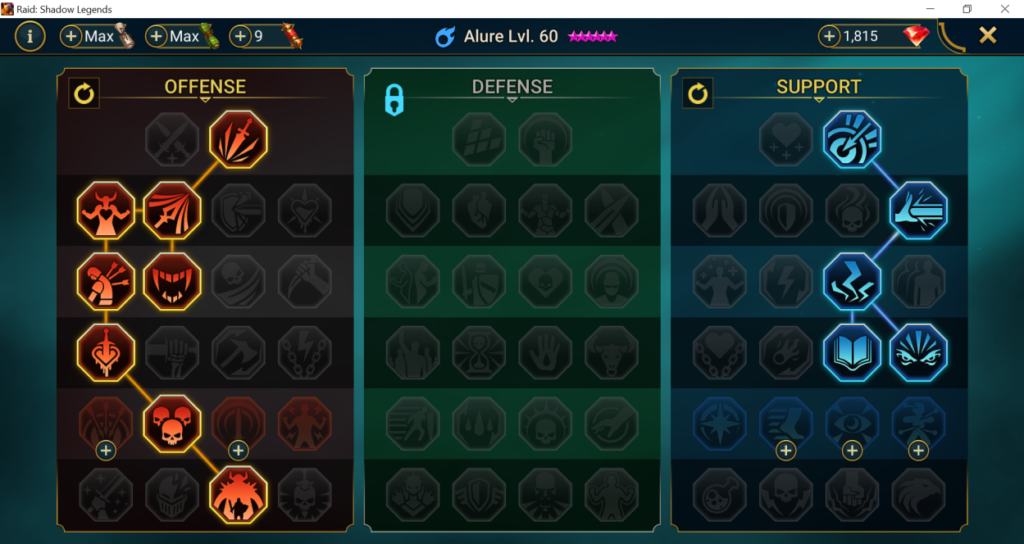 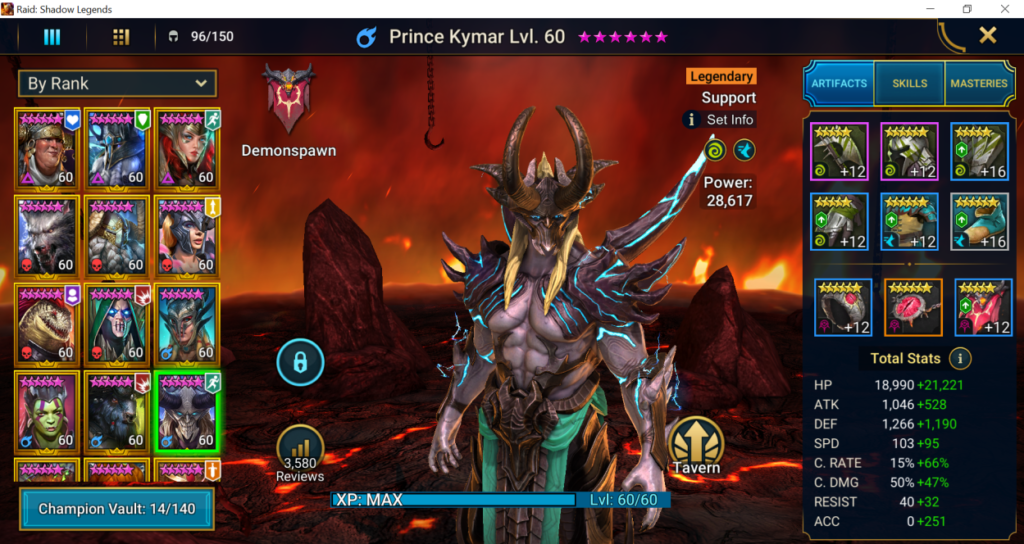 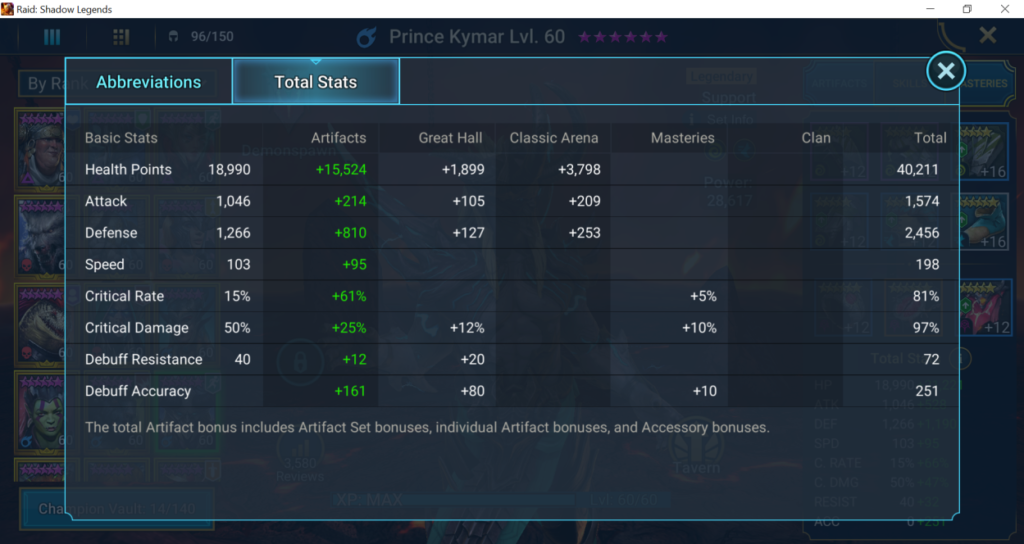 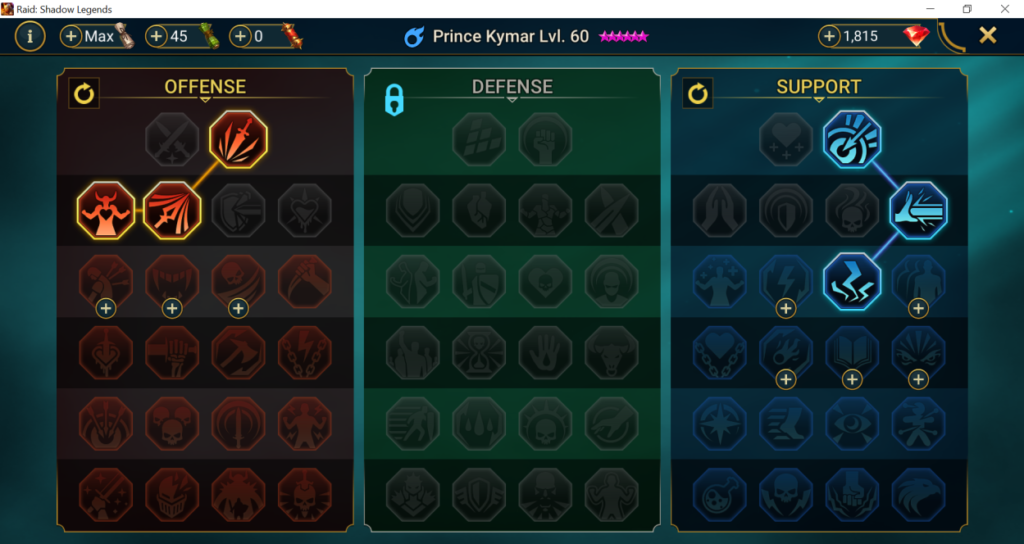 As previously mentioned, Manibal’s and Azazzel’s series has really helped me to progress further in Faction Wars, and now I am only 6 stars away from Lydia, with the end in sight, so a big thank you to the pair of them for their hard work.