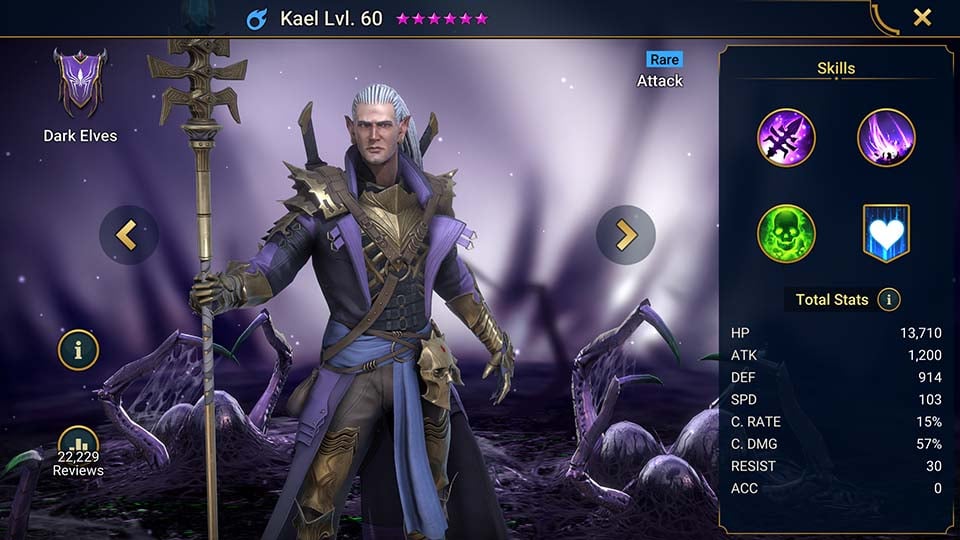 Kael once a petty thief roamed the realm of Teleria taking whatever he could using his Elven magic to fight off angry foes. Arbiter found Kael and offered him a chance to set right the wrongs he had done and ultimately take up the fight against the evil Undead rising in their midst. Arbiter taught Kael of friendship and the need for Allies, that is when he became one of and potentially the strongest of the unlikely foursome alongside Galek, Elhain and Athel.
Kael is easily the best starter champion in Raid: Shadow Legends. Kael can be built to play in any area of the game with a high damage Attack all Enemies (AOE) ability on his A2 and poison abilities on his A1 and A3. These skills make him extremely valuable in Dragon, Clan Boss and Arena. Like all the starter champions you only need to build him with 85% Crit Rate to ensure a Critical hit on his A2.
If building for Clan Boss you would need to focus his build on high Defensive stats, the ‘correct’ level of accuracy and speed. More information can be found in the Clan Boss guide section.

Overall Kael is a fantastic Rare capable of competing with Legendaries for a spot in end game teams. Easily the best starter champion and one worth taking to level 60!

Increases Ally HP in all battles by 15%