Along with the upcoming fusion champion Tatura Rimehide we are going to be getting our hands on 11 other champions entering the game for Christmas 2021. With this addition of 10 other champions into the game in addition to the fusion, we will have a total of 11 new champions in the game before the end of 2021. We have also been told that there will be 15 champions added to the game, however, for now here is what we know…

This is a quick look at the champions that will be joining the factions of Raid Shadow Legends during this event: 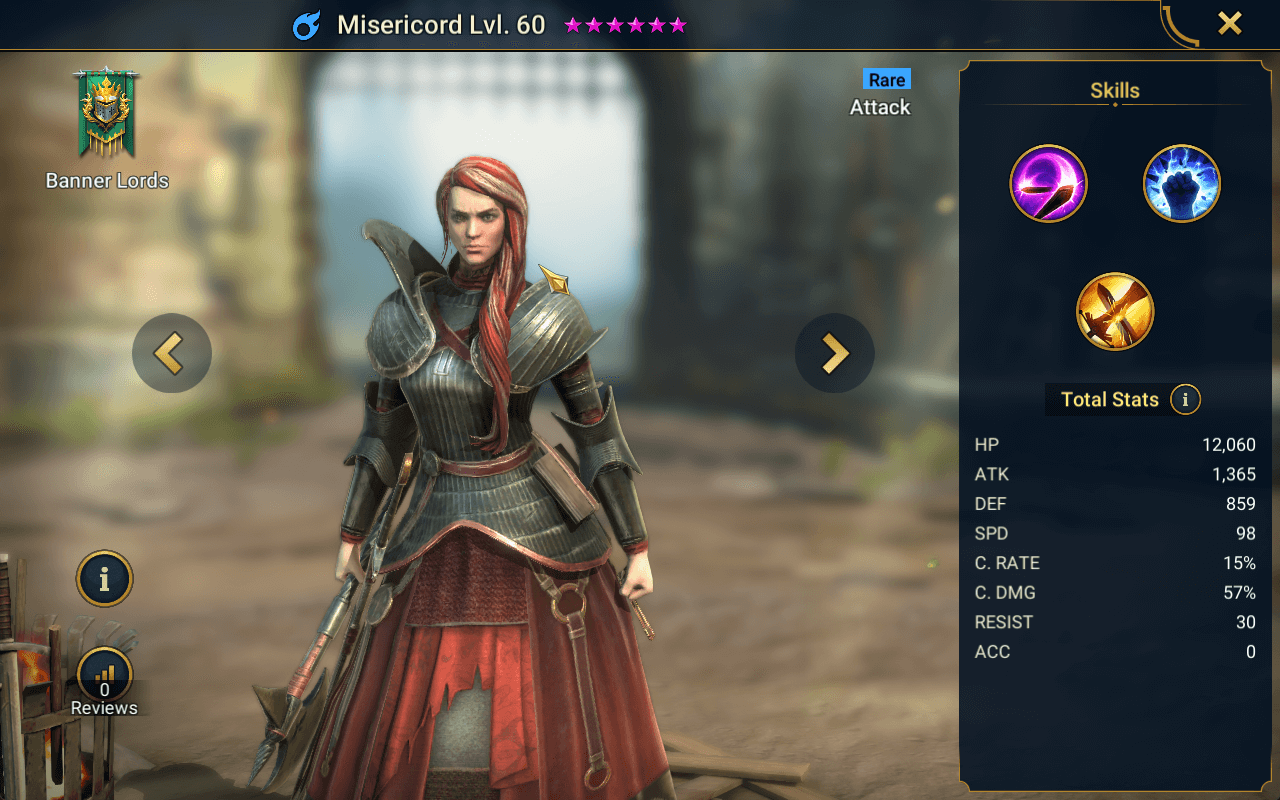 Misericord is a rare banner lord champion that has a decreased speed on her A1, turn meter fill on A2, and personal counterattack on the A3. She is an attack-based champion. 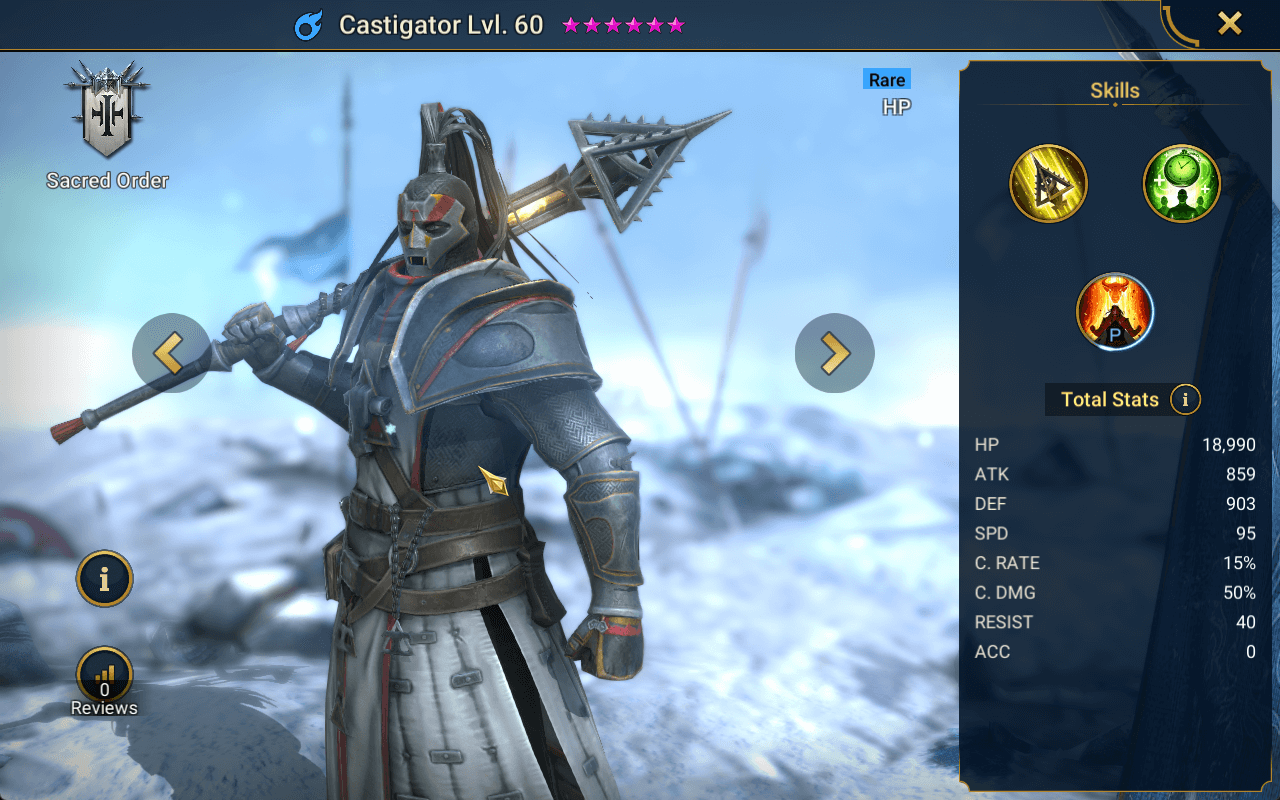 Castigator is a rare champion joining the Sacred Order faction in Raid Shadow Legends. He is an HP-based champion with a single target Provoke on his A1 attack and Heal on his A2. He also has a passive that provides 15% less damage from champions under the provoke debuff. 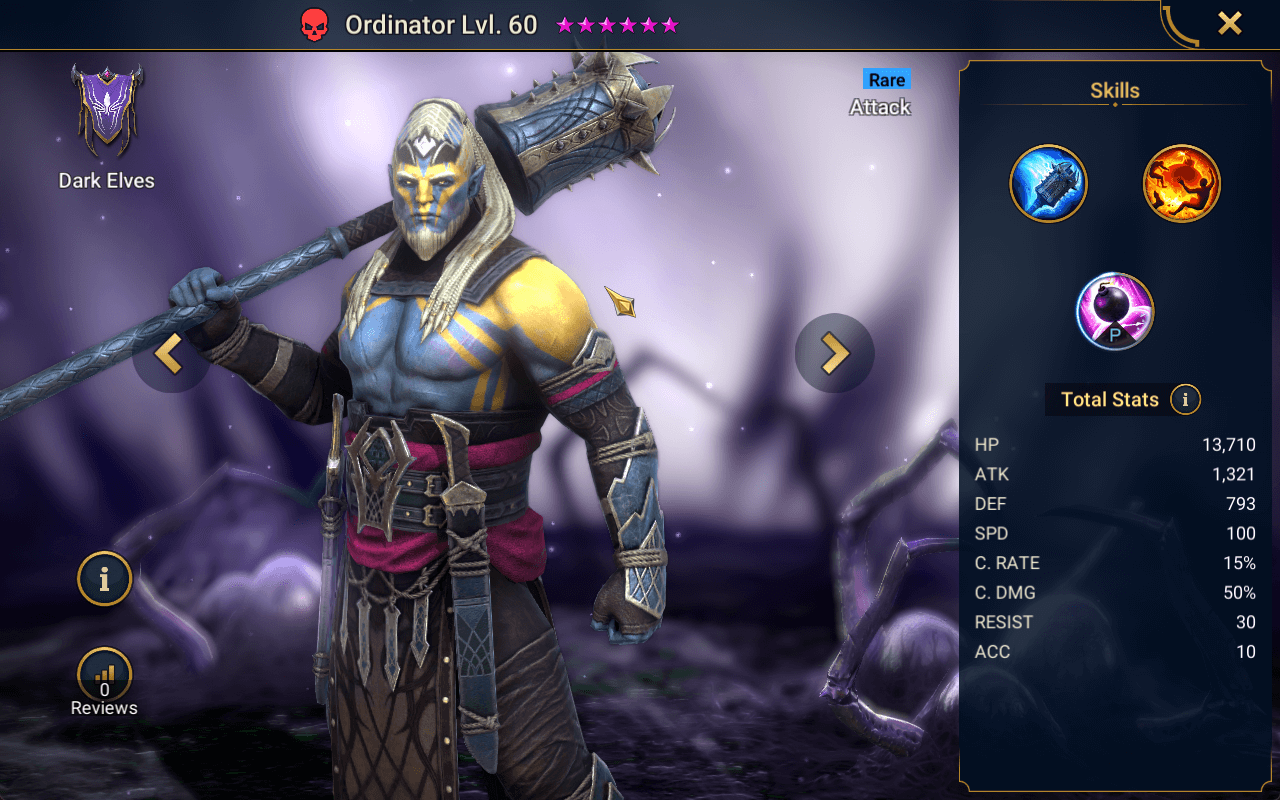 Outside of looking like a mashup between Kael and Galek, Ordinator is a new Dark Elf champion that will provide a single target freeze on his A1, AoE Bomb on his A2, and an interesting passive that has a chance to reduce the detonation cooldown of bombs on a target by 1 when attacked. 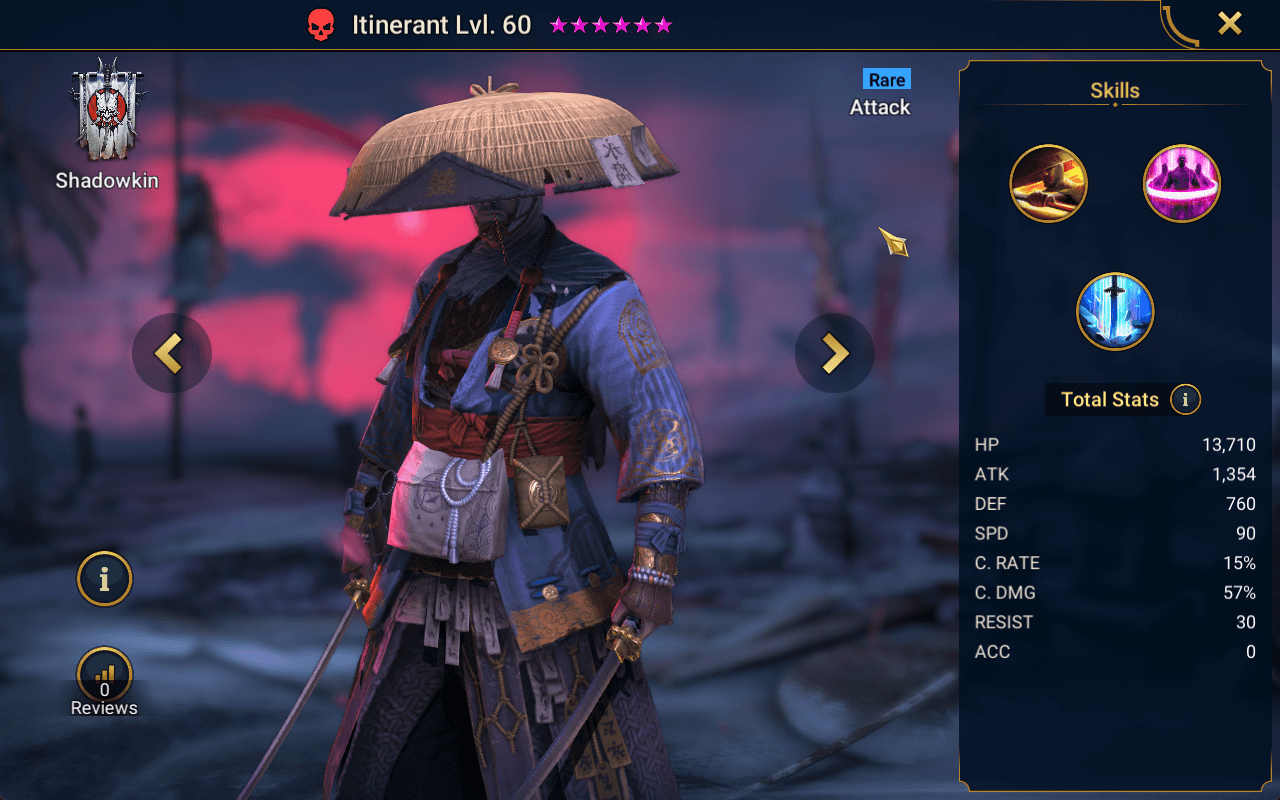 Itinerant is a Rare, Attack based champion joining the Shadowkin Faction. He has a single target leech on his A1, AoE decrease speed on his A2 and a decrease MAX HP on his A3. 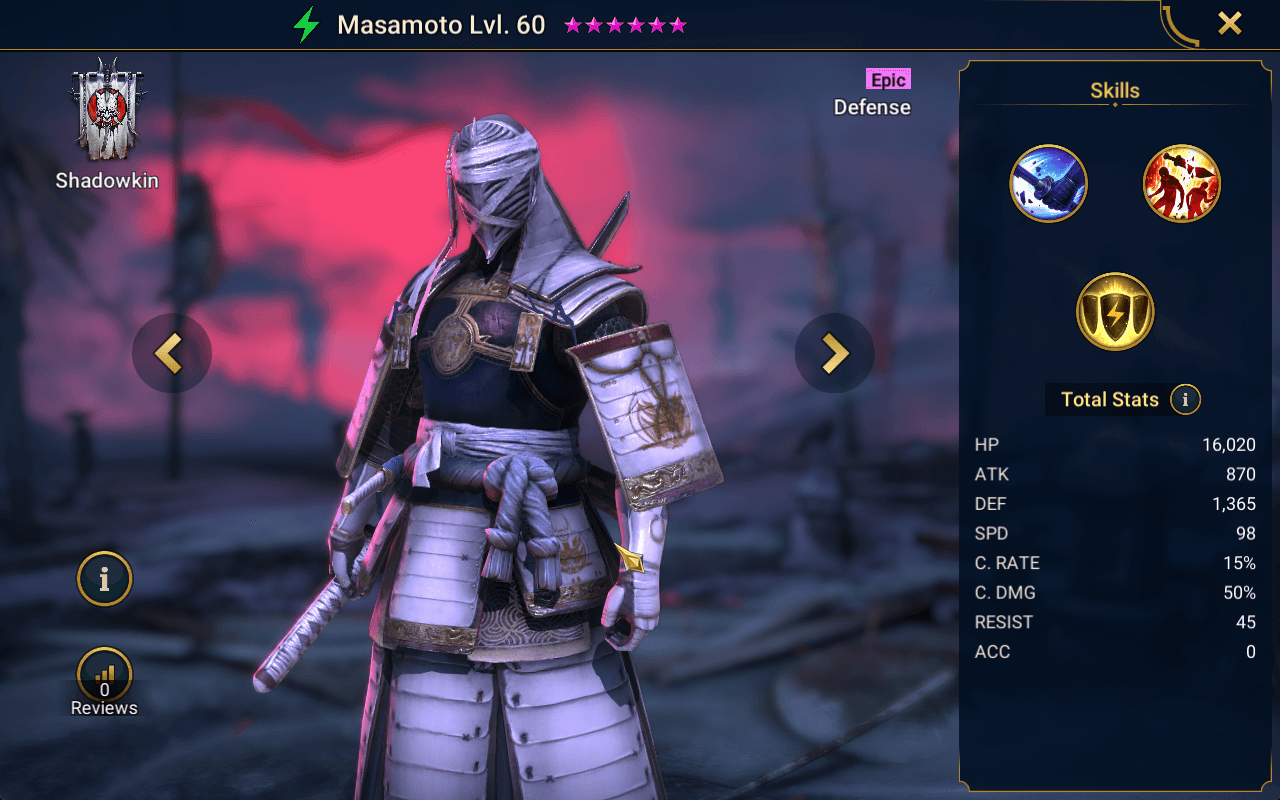 Masamoto is a Defence-based champion that will be joining the Shadowkin Faction. His A1 Attack will have the chance to steal a buff from the target, A2 will provide an AoE Decrease Attack and his A3 will provide a 60% Increase Defense to your party for 2 turns. His A3 will also fill turn meter by 15% on all allies. 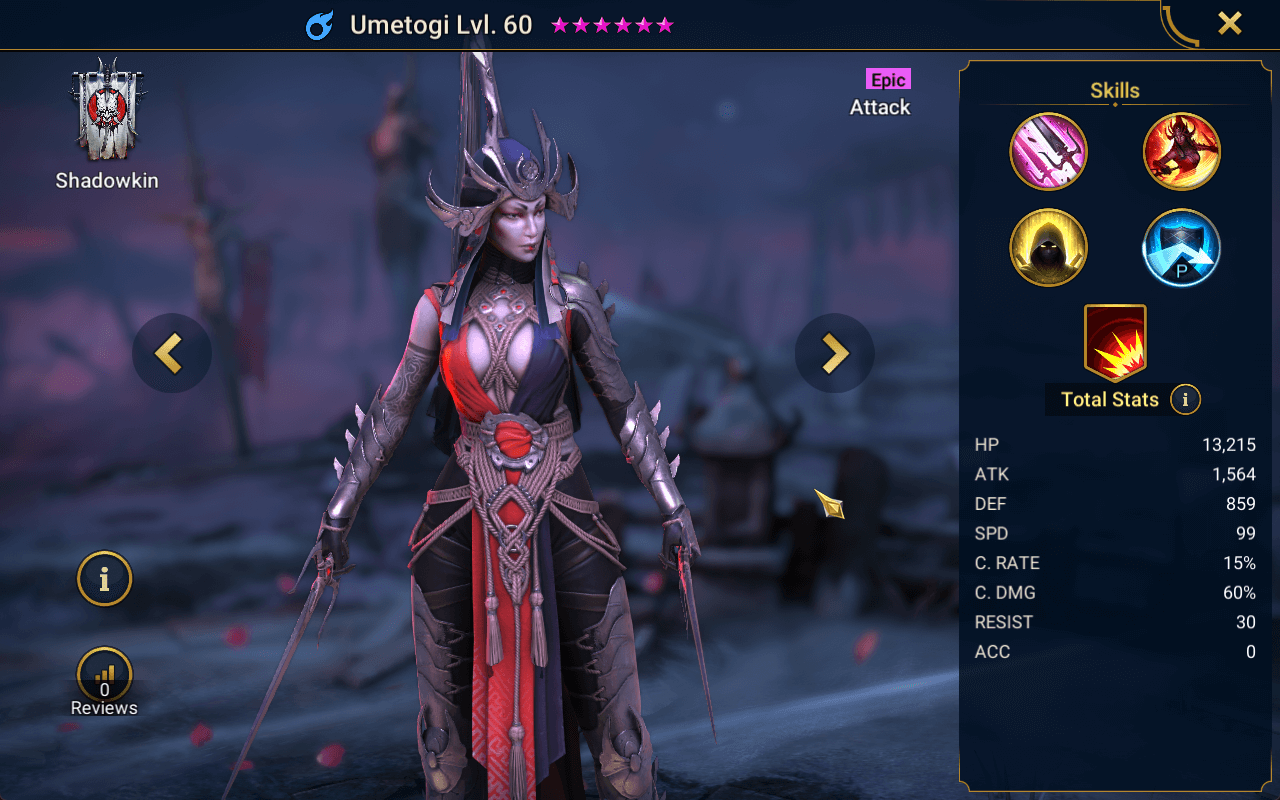 Umetogi is another Shadowkin epic that will scale off Attack. Her A1 attack will hit a single target 2 times with an increased crit rate if she is under veil or perfect veil buff. Her A2 also hits a single target 2 times like her A1, however, in addition to this, her A2 will also ignore defense if she is under veil or perfect veil. Her A3, as I am sure by this point you may have guessed will provide a Perfect Veil buff on this champion in addition to a 30% speed increase. Umetogi’s A3 will also increase her turn meter by 40%. In addition to this, she also has passive on a 4 turn cooldown that will reduce the incoming damage from 1 attack to zero and then counter-attack with her default skill. When being attacked by a boss this reduction changes from zero to 50% damage reduction. 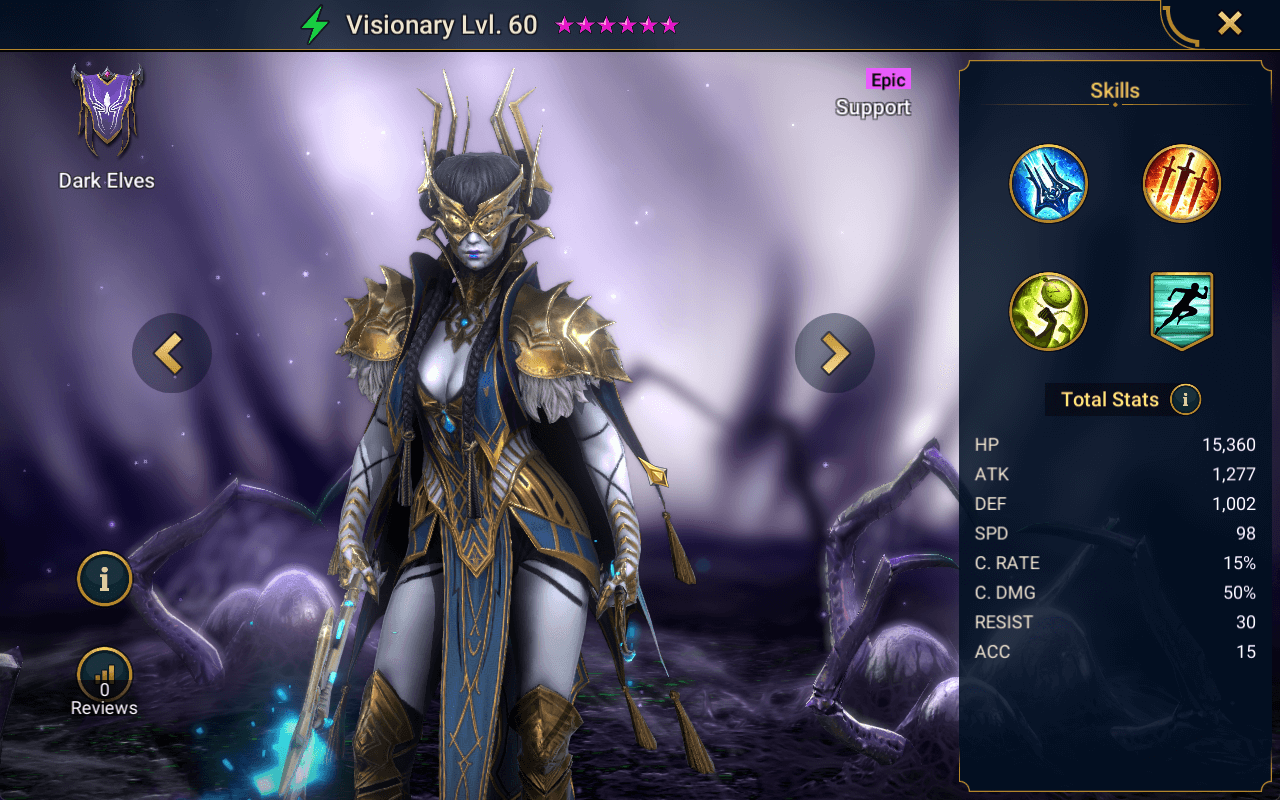 Visionary is an epic support-based champion for the Dark Elves Faction that will provide a 15% decrease to turn meter on her A1. This attack as standard has a 30% chance, however, will increase to 100% if the target is under a decrease c.rate or c.dmg debuff. Her A2 will place a decrease c.rate and decrease c.dmg debuff to all enemies that will book up to a 100% chance of placing it from 75% as standard. Visionary’s A3 will provide an increase to c.rate and c.dmg on all allies for 2 turns and fill all allies turn meters by 15%. In addition to this kit Visionary will also bring a 24% speed aura in dungeons making her a formidable epic champion to say the least. 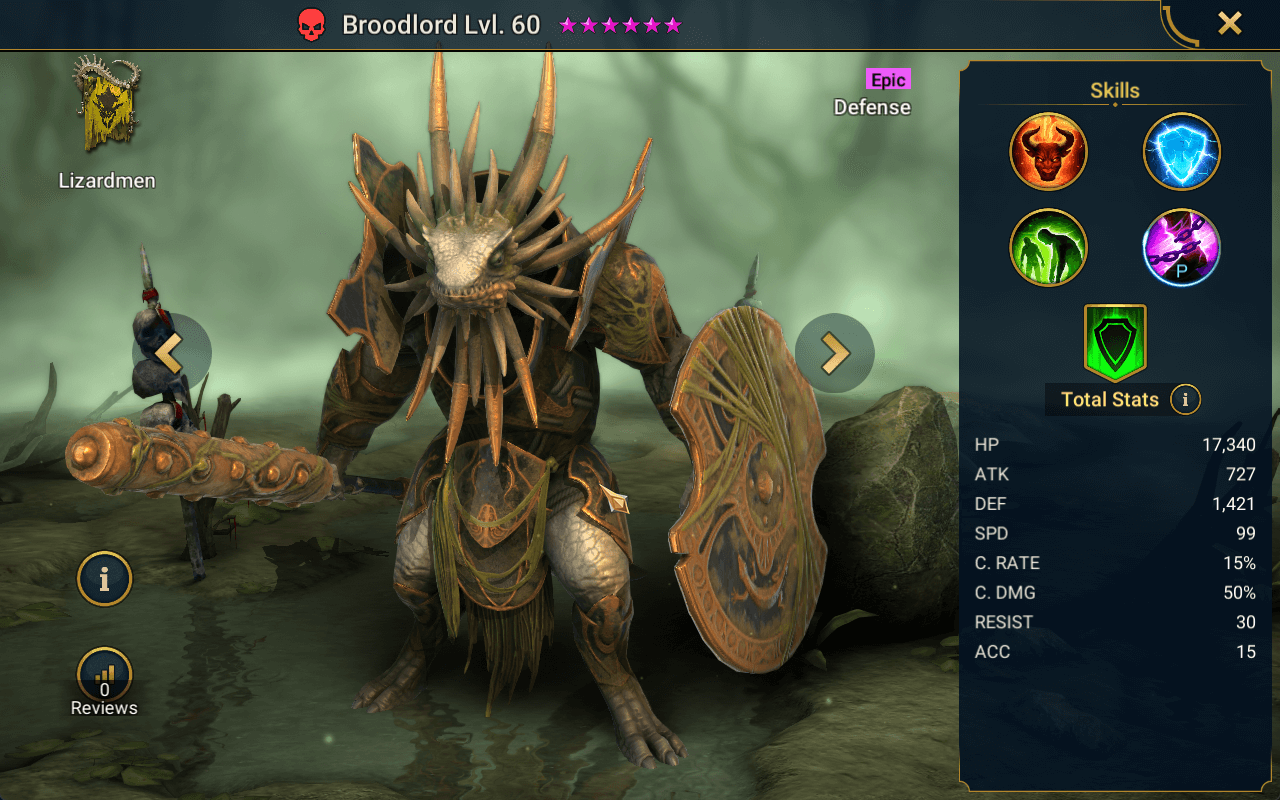 Broodlord is a defense-based epic champion that is joining the Lizardmen faction in Raid Shadow Legends. Broodlord will provide 30% chance to land a provoke on his A1 if the target is under a Decrease SPD debuff. This will book up to 50%. His A2 will provide a single target ally protection buff with a block debuffs buff also placed on that champion. This A2 will also place a shield buff that is equal to 20% of this champion’s MAX HP. Broodlord’s A3 attack will attack all enemies and has a 40% chance of placing a stun debuff for 1 turn. This stun can book up to 50% and will have a base chance of 75% (85% booked) if the target is under a decreased speed debuff.

Now let’s take a look at the legendary champions that are joining the game in December 2021. 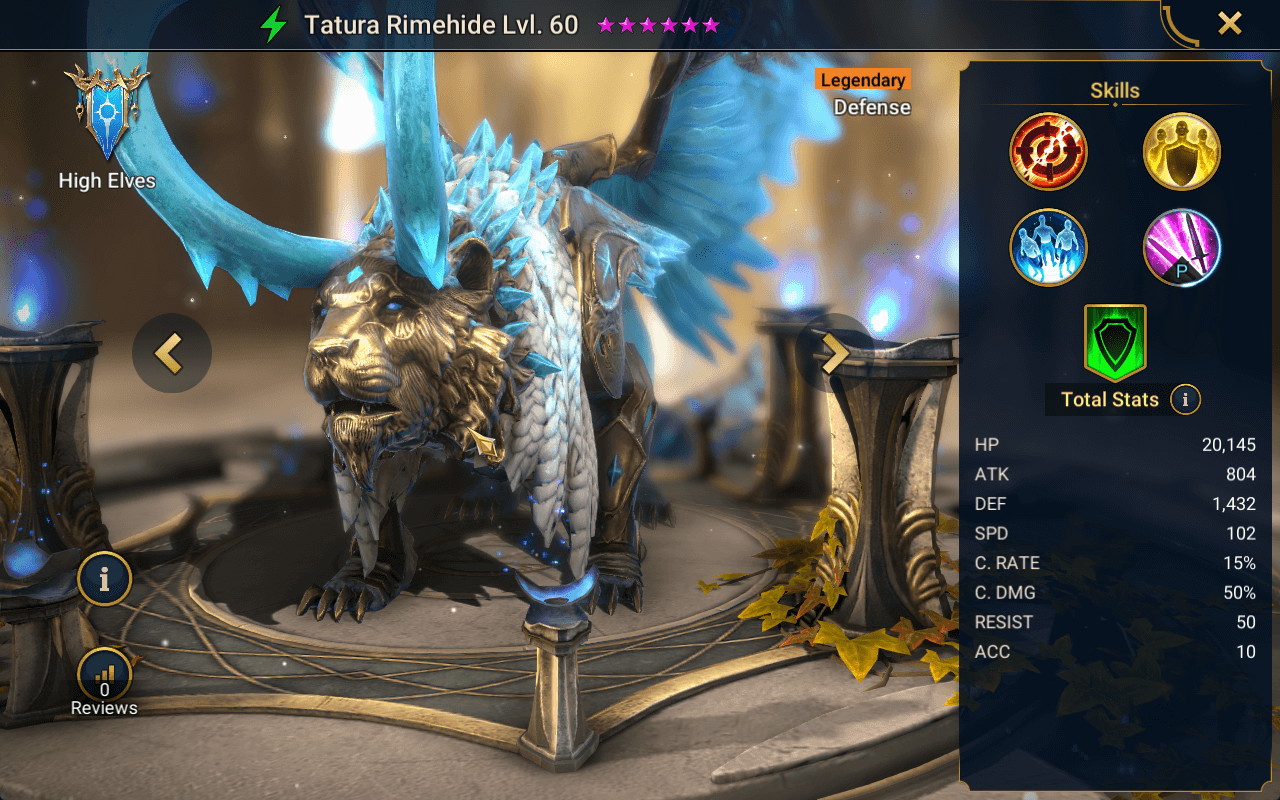 Tatura Rimehide is a legendary Defence-based character that will be joining Raid Shadow Legends as the Christmas fusion event in 2021. This champion has a pretty cool kit that will be really useful in Doom Tower and Hydra moving forward. We will have full details on the fusion and his guide coming up on the website over the next few days. 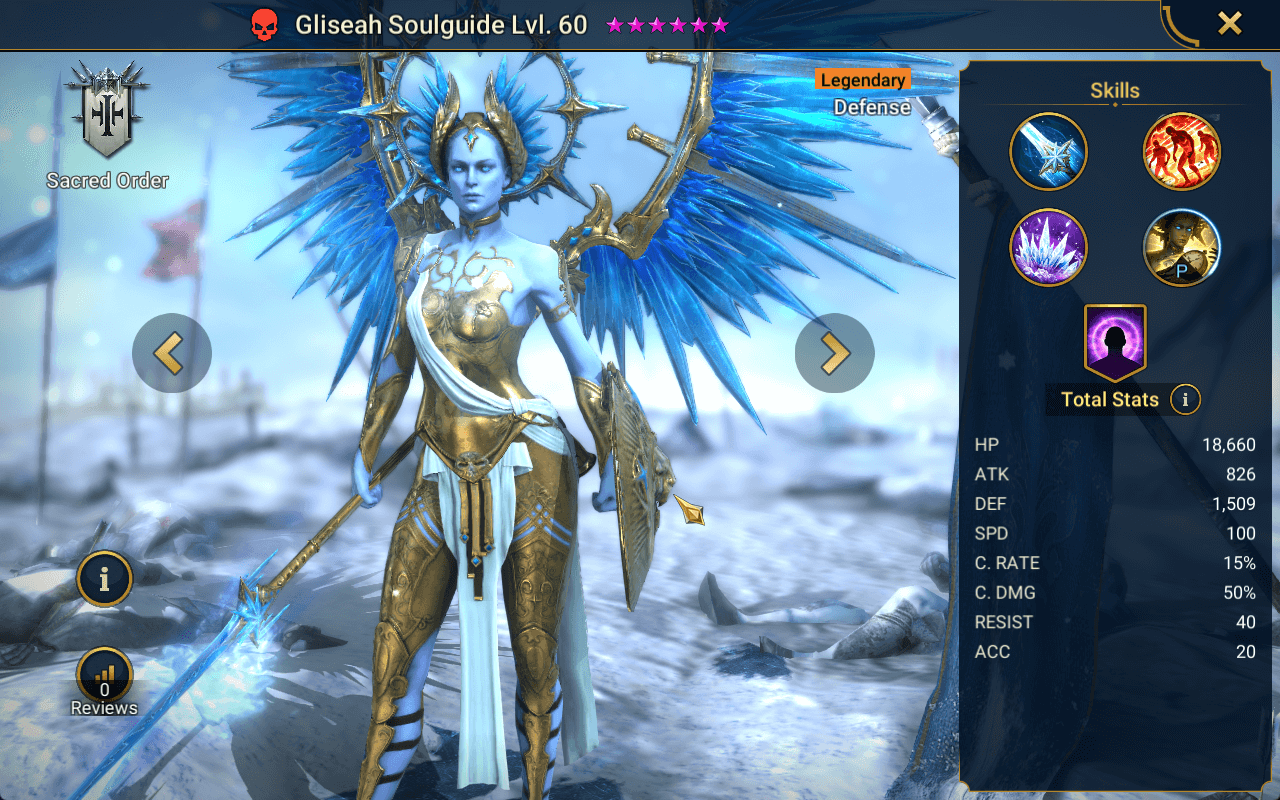 Gliseah Soulguide is a Legendary Defence-based champion for the Sacred Order Faction. Along with looking like an absolute beast this champion will provide a Freeze and Debuff spread to all enemies under the freeze debuff, AoE weaken that also steals a buff if the target is under freeze, AoE block debuff buff on all champions (with a chance to place freeze on all enemies) and, if she wasn’t chilly enough, she will also fill allies turn meter by 15% for each freeze debuff that gets placed by the skill. In addition to all of this Gliseah Soulguide has a passive that whenever an enemy tries to put either this champion or an allies skills on cooldown she will place a freeze debuff on them that also has a 50% chance of denying the cooldown of the effect. This freeze debuff can not be blocked or resisted, however, it will not deny cooldown increasing effects from boss fights. 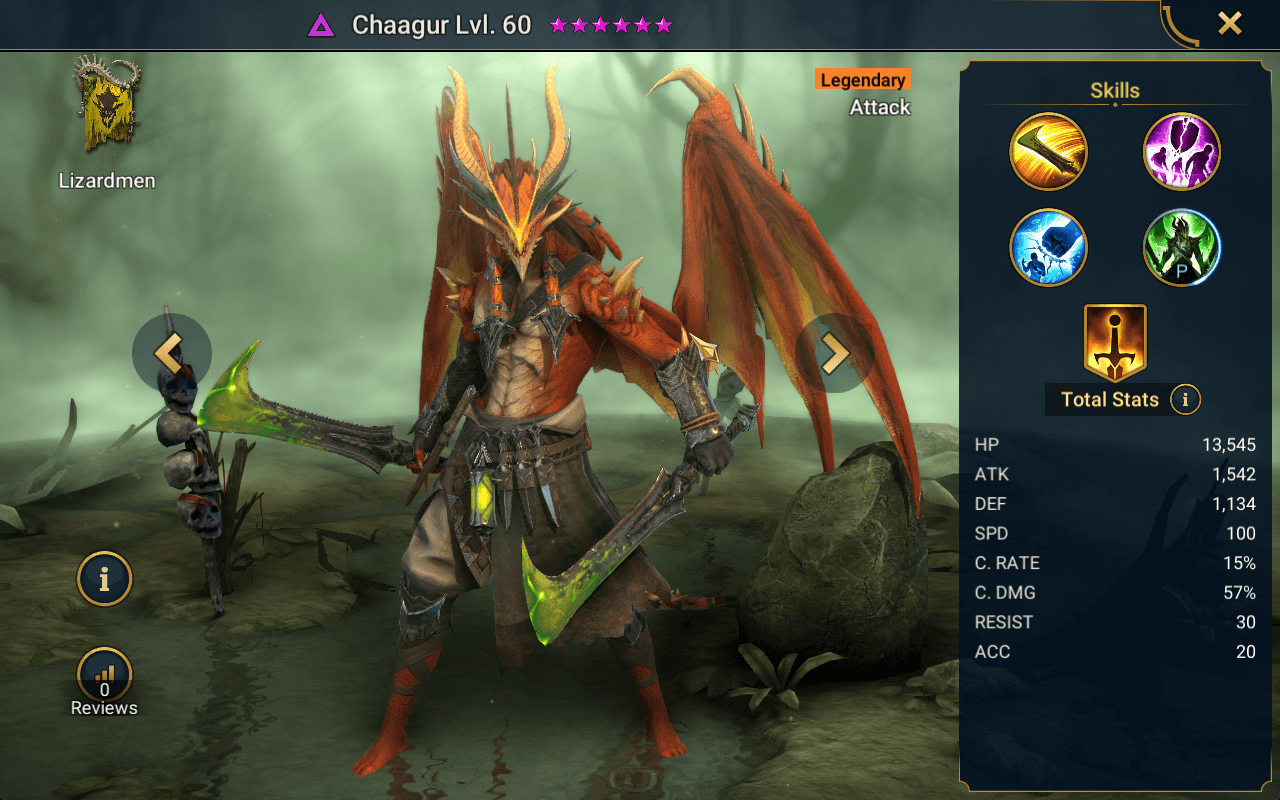 Chaagur is an attack champion for the Lizardmen Faction. His A1 attack has the chance of placing a sleep debuff for 1 turn. His A2 hits all enemies 2 times with a chance of applying poison on the first hit and decrease defense on the second. His A3 is a single target hit that is then followed up by another random hit. If the target is under poison this attack will ignore Shield, Block Damage, and Unkillable Buffs. His A3 also grants an extra turn if he kills the target and also resets his A2’s cooldown if he kills 2 champions. His passive is also rather nice as he will instantly attack enemies when they are damaged by poison and he heals for 10% of the damage inflicted when hitting champions under the poison debuff.

What are your thoughts about these champions? is there anyone in this list that you can’t wait to get your hands on and where do you think that they will excel in the game? Let us know in the comments below…