Imbued with magical purpose, Helicath claws into Teleria, joining the Demonspawn Faction, as part of the June 2022 Fusion Event.

Helicath will have multiple uses and becomes only the second champion (after Valkyrie) that applies a Shield based on the DEF value of your build. This could potentially create very significant shields. In addition to his shield, Helicath also brings a Weaken on his A1, a powerful debuff to help increase your damage in Clan Boss or Hydra Clan Boss. His signature ability will be his A3, Devoted Servants, which applies a Block Damage buff to all allies for 2 turns (only Roschard the Tower could apply for 2 turns prior to Helicath’s release). If this Block Damage buff is removed in any manner, the champion instantly is granted an Increase DEF buff for 2 turns. Helicath will increase his own DEF for each Block Damage buff on your team and also counterattack when any champion under block damage buff is attacked.
Helicath is also a fantastic champion for Bommal & Spider!

Helicath offers a number of different options. You could use Helicath as a big shielder in a Killable Clan Boss speed tune (block damage will work until turn 50), or as an Unkillable. You could use Helicath in Arena to force opponents to bring double buff removal or a block buffs (watch out for those sneaky Ramantu’s that can disable his A3 passive) or run him in Protection set to annoy your enemies with his counter attacks. He will also be excellent in any Hydra Team to help reduce the incoming damage your team receives (although watch out for that Mischief head!)

[Passive Effect]
Whenever a [Block Damage] buff placed on an ally by this Champion is removed, stolen or expires, places a 60% [Increase DEF] buff on that ally for 2 turns.
Level 2: Cooldown -1
Level 3: Cooldown -1

Feast of Agony [P]
Increases this Champion’s DEF by 5% for each ally under a [Block Damage] buff.

Counterattacks with the default skill whenever an ally is hit while under a [Block Damage] buff. Can occur once per enemy turn.

Aura
Increases Ally DEF in all Battles by 30%

Is Helicath worth going for?

We always recommend going for every Fusion, if you have the resources to do so – however, Helicath is arguably one of the best fusions we’ve had in recent months, and will be very useful for all accounts, both new and old!

As this is a Traditional Fusion, you will need to collect 16 Rares, to fuse 4 Epics, to then fuse Helicath. Each of these will need to be levelled up and ascended.

Due to this being a traditional Fusion event, you will need to collect the following Champions to fuse Helicath.

As always, we will keep you updated every step of the way through the events, providing you with daily updates.

Levelling these Champions will require:

Ascending these Champions will require: 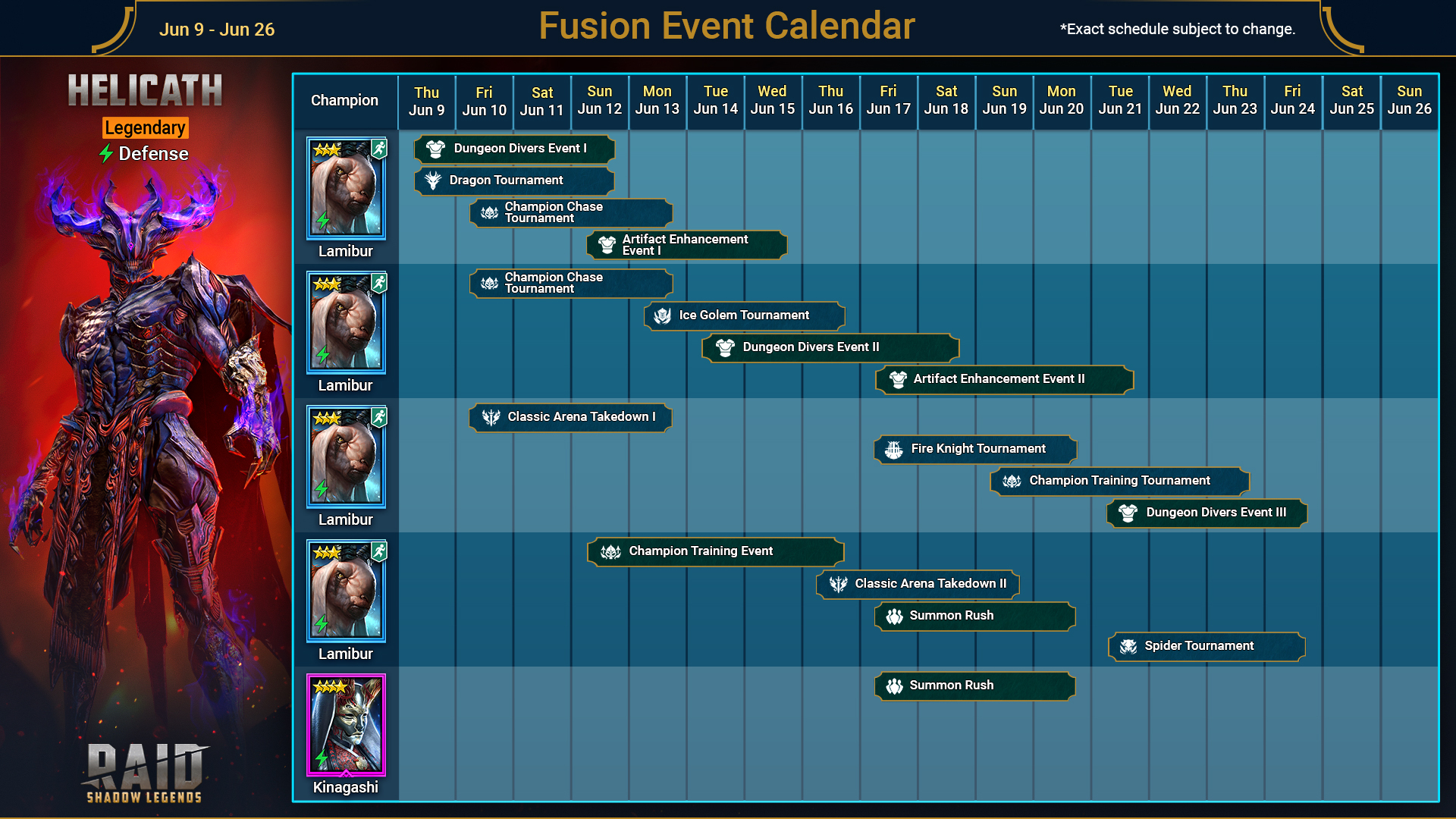 After a rocky start to say the least, Plarium finally managed to get the events out for the Fusion, and as such, we were nicely compensated for our lost time too.
Both of today’s events will give us the opportunity to get our hands on copies of Lamibur, out of the total of 16 we will need throughout the fusion.

So, to kick off the start of our Fusion, we’ve got a double event that lines up perfectly together, it’s time to dive straight into Dragon, 2250 points for this will take around 2250 energy at level 20 – which is a maximum of 140 runs!

All the points you accumulate in Dragon will also count for Dungeon Divers so it’s a great way to double-dip.

Of course, Dungeon Divers will take longer than Fire Knight to finish with 2850, so you’ll have to clean up these points elsewhere.

Time to farm the arena! 290 points for this rare, which isn’t unobtainable.

Continue to use all daily battles, but keep an eye on the points, you may need to gem 1 or 2 refills to reach the points that you need depending on your arena tier/win rate. Of course, always aim to win as many fights as you can, don’t waste tokens for fights that you’re not sure of.

For the Champion Chase tournament, you will need to gather champions from all sources, fusions, market, campaign, shards – this weekend lines up with the x2 ancient summon event, so if you’ve been saving shards there is no better time to pull than now for most people. Aside from Ancient Shards, mystery shards can be used to farm easy points!

For todays Artifact event, you will need to level up your artifacts, to reach the required points for another Lamibur.

This will be a great opportunity to take the new Artifact Upgrade system for a spin!

To get your hands on Lamibur from Ice Golem, it will take you 140 runs of stage 20 based on the worst possible drops, of all 5* rare gear, of course, this figure can be significantly lower based on your drop rates. This will take ~2250 energy.

To gather another Lamb ready for the sacrifice you’ll be hunting dungeons for 3750 points in the Dungeon Divers Event, this will be easy to accumulate from either training or Ice Golem that is also currently running, or even from the Fire Knight Tournament that begins in 2 days time.

Time to farm the arena! 390 points for this rare, which isn’t unobtainable, but it is however on the high side of recent point requirements.

Continue to use all daily battles, but keep an eye on the points, you may need to gem 1 or 2 refills to reach the points that you need depending on your arena tier/win rate. Of course, always aim to win as many fights as you can, don’t waste tokens for fights that you’re not sure of.

Today’s Fire Knight Tournament, much like the other Tournaments of this fusion will require 2250 Points for the rare, which is a maximum of 140 runs, stage 20 or higher, based on the worst possible drops.

For todays Artifact event, you will need to level up your artifacts, to reach 5300 points it will take 16x 6* items to level 16, so this will take a fair chunk of silver.

For the Summon Rush, we have two events this weekend, both a guaranteed Champion and a 10x – However the point requirements are incredibly high if you’re aiming for a copy of the Epic, but remember the Fusion is still doable without, unless you’ve skipped any events thus far.