Community Stories: Helicath Fusion – Was it possible as a brand new F2P player?

Not too long ago we were approached by Karim_Panda, a member of the Raid Community, who was inspired by previous videos showing other players’ progression, and what they’d done with their accounts, he decided to share his story so far in Raid: Shadow Legends, which you can find here.

Karim once again asked us if we’d like to share his story, as he has recently started a Free to Play account, and in the very early stages decided to take on the Helicath Fusion, so let’s take a look at how he got on!

I contacted the HellHades team again to share another story about a very young FTP account I started less than a month ago.

It might be interesting, especially for new players who struggle with the current fusion or fusions in general.

The reasons why I started a new free-to-play account are:

Since it was not my first account, and I would characterise myself as quite experienced & knowledgeable about Raid the start was easy as expected.

The classic & logical choice to start off is Kael and I wouldn’t recommend otherwise.

In the very early days, there is nothing spectacular and the game guides you more or less well in this period. So, besides the normal progress towards 6* ing the starter champion a few days later the champion training tournament was announced where you either were running for Kyoku (advanced accounts) or Magnarr (younger accounts).

On my main account, I already got Kyoku so there was no ambition to compete in this tournament.

But is this challenge possible if you just started off the game?

I was going to find out (as I also have not built Magnarr on my main account and it was another test of a champion).

Through all my progress on my main account, champion training tournaments/events were always easy for me and I mostly completed every single one of them especially to farm books whilst levelling new champions.

So, what I did was I farmed my food to 6* Kael but waited for the start of the champion training tournament to complete it. At the same time, Deliana was joining the forces…

Already at this stage, there are a few things to point out:

In the next days of the tournament, there was only one other player competing but in the end, he gave up and I finished the tournament table with more than 4k points ahead: 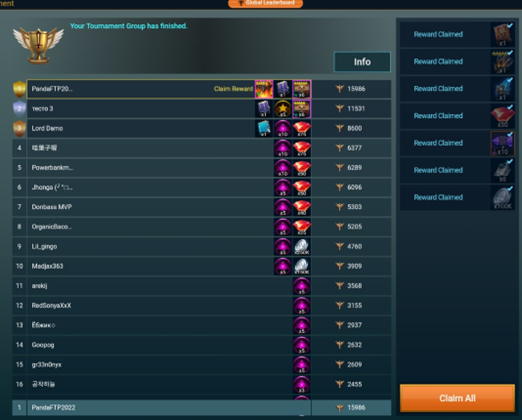 This was just 1 or 2 days prior to the upcoming fusion which was widely promoted as one of the best fusions ever. Since it wasn’t really a priority at this early stage for me I burnt nearly all my resources at this point including the big chunks of energy from the Plarium anniversary.

In addition, I used referral accounts already to get 600 energy in total.

My shard count was ok for a new account but later more regarding this topic.

Basically, at this point it was an “all or nothing” decision to go for the fusion which I made for 2 reasons:

Having completed this first challenge, I was curious about how far I could progress in the fusion.

If I have experience with something, then it is fusions. On my main account, I have completed every fusion since Yoshi the Drunkard without exception. Sure, you could say that my main account is way different since it is very advanced and also P2W.

But from a planning perspective running a fusion on a FTP doesn’t differ a lot from P2W. You just need to put more effort and hope that nothing unexpected happens.

Once the fusion plan was released the big picture was already clear:

Either you will be able to get the epic in the Summon Rush event or you need to get all the Goat rares.

The big problem was that the number of points necessary to get the epic champion was unclear and in previous fusions ranged between 3000 and 4500 points as also HellHades pointed out.

I calculated that I could get around 4.25k+ points:

So far so good but this was just a theory with big disadvantages:

Additionally, I had to value only resources which were bringing me points for the fusion:

I postponed opening the gem mine until after the fusion. So far I used my gems for the masteries of Kael & Deliana and refilling energy

After thinking back and forth I decided to get every Goat possible at least until the Summon Rush event was open. For champion chase I could get the 1st Goat easily:

Still thinking I had to spare as many shards as possible for Summon Rush I just decided to pull another 10 ancients with the following result: 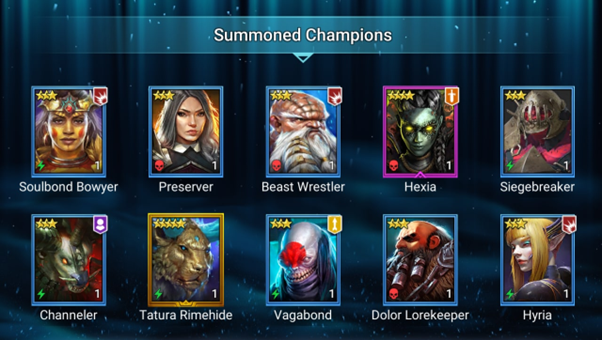 Not only did I almost instantly get the 2nd Goat from champion chase – I was also very lucky to get such an awesome Legendary early on.

Progressing through the first week of the fusion was very tough and two events I just completed a few hours before they were ending:

I looked for every possibility to generate more resources: one time through challenges & missions and continuously through Doom Tower, Clan Boss and Faction Wars progress. Before the Summon Rush, I could finish all my advanced quests daily unless maybe I had to beat a faction war boss.

I never thought I could beat Bommal so early but to make the progress also meant having a better understanding overall of this boss leading a full auto team.

Just right before the Summon Rush, I went on the break from  mission & challenge progression basically 1 week after I am still at the same point: 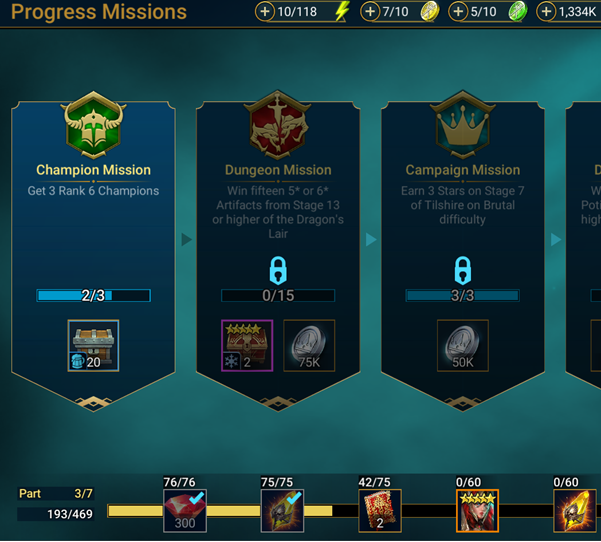 The Friday when both events (Summon Rush, Artifact Enhancement) started I could describe as a “Black Friday”. I was shocked by the number of points to get the fusion epic (almost 5k) plus 5.3k points for Artifact enhancement. A gap of 750 points I felt was impossible to bridge and my silver count was already drained from the first Artifact enhancement event. Even without the epic, I needed enough points to get the Goat from Summon Rush so I pulled my sacreds, voids and ancients.

My hope was also to get at least useful champions to progress in Doom Tower (Scarab Boss) and/or Fireknight. It turned out I pulled two epics in exactly those categories:

For Vergis (A2 and A3 booked) these stats and gear sets were enough to beat the Scarab boss more less solo which would require otherwise a very specialised team: 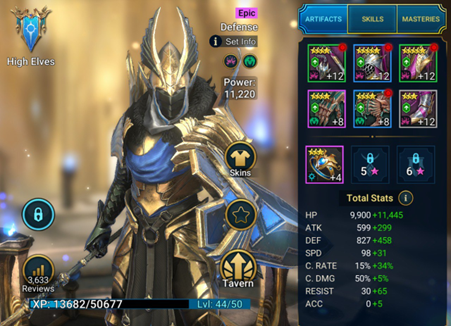 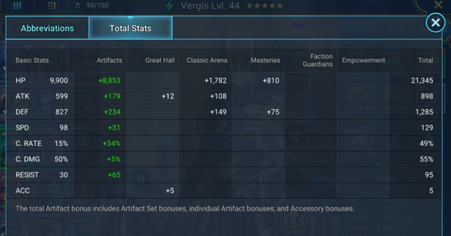 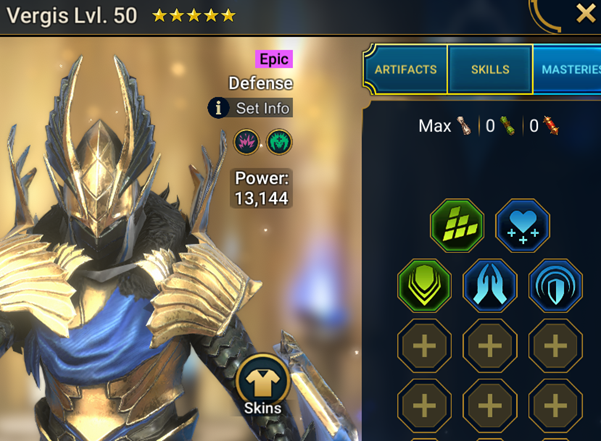 Fylja at 5* was just enough to beat Fireknight stage 12 1x time and stage 11 “half automatic”: automatically clearing the waves and manually fighting the boss. I gave up on bad affinity stage 13 to save resources for the rest of the fusion.

The remaining scary events for me were the 2nd Artifact Enhancement plus the last Dungeon Diver. However, with all the incoming flow of resources, everything was possible to handle (including a sharp Gear cleanse like “every out which isn’t immediately useful or a longtime keeper”): I could complete all the events in time with at least 1-day buffer. One step with a certain risk was to dive into the Nightmare campaign with 6* Kael + 6* Deliana (sometimes even solo). This can easily deplete a lot of energy but mostly I was able to get complete it first try.

The rewards are quite good at this stage, especially the big amounts of silver: 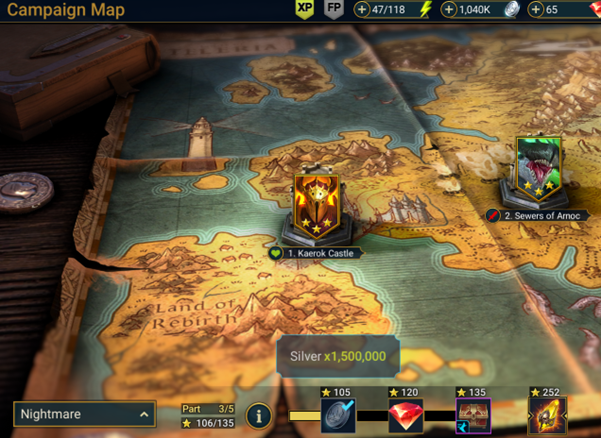 So, the last challenging part was to reserve enough energy to farm the remaining spirit potions and levelling the fusion champs.

One thing I’d like to emphasize again in this article, and is how important consuming videos, website information, optimiser etc. is for fusions. Not only is the awareness raised for game-changing champions in the first place. Also, during the fusion in the case of the HellHades youtube, stream and website a lot of useful information is put out and even though I have completed so many fusions there is always something new to learn.

If I want to know stats for stages, I often use the Raid Stages Tool during progression plus the drop rates for spirit potions I needed to calculate the energy I had to reserve for farming those.

Even the optimiser isn’t so much important at the early stage of this account I used it to get myself a better overview of my champs and gear.

By today it looks like my decisions were right plus I had the extra bit of luck I needed to complete this fusion.

My only remaining task is the level and ascend the last epic (food & potions I have already): 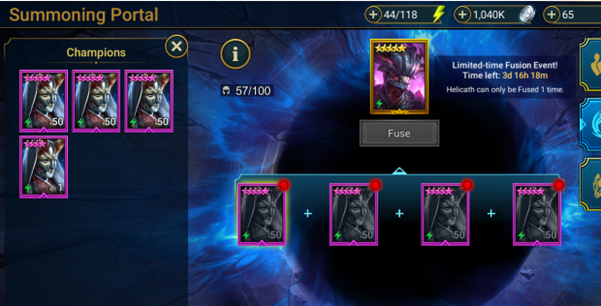 As it is visible, my resources are depleted and again and also I still haven’t opened the Gem mine. 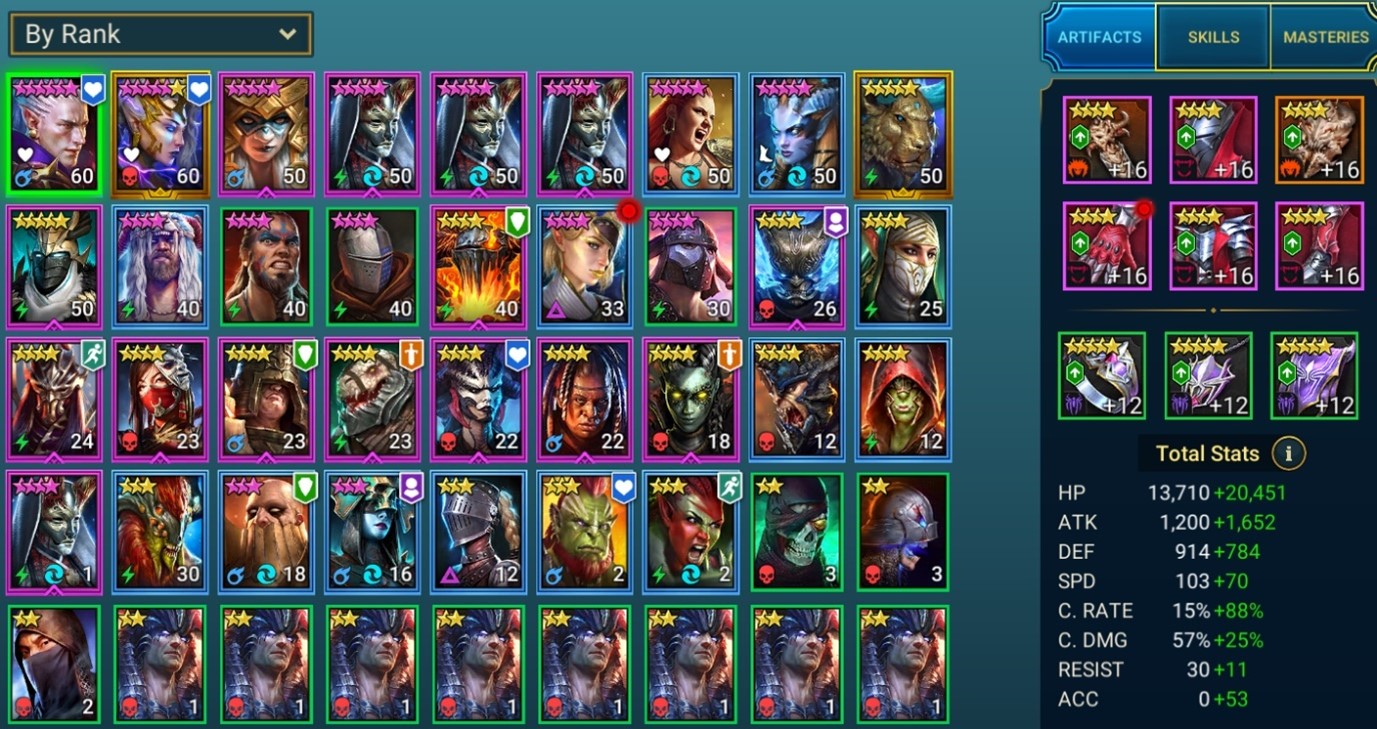 I find it interesting that I kind of always end up with my free or “easy” to obtain champions:

And to answer the original question: Deliana is simply mental for fresh accounts. With force, she has the perfect affinity next to Kael and tested different gear sets on the referral accounts for her. The outcome was basically that every build works with a certain amount of speed & hp.

We hope you liked Karim’s story, as mentioned at the start, please let us know in the comments if you’d be interested in seeing more content like this, and feel free to reach out to Neva on discord (Neva#3251) with your stories!