This secret room requires you to use Barbarian Champions only. Let’s break down how to approach this challenge!

Below are the waves you will face in the secret room including the stats – generally secret room enemies are much slower than other aspects of Doom Tower. You should pay special attention to the following problematic champions:

There are no huge threats on this floor, however, they are quite tanky, with lots of damage mitigation from Ursuga Warcaller, and Valkyrie’s that will slow down your ability to kill the waves. The main stall will be wave 1 here, outside of this the enemies are relatively easy to pick off with fairly little risk to your team.

How to beat the secret room!

Below is the recommend team that is best fit to beat this room. We also detail alternatives for each champion if you do not have them. It is worth noting alternatives are fine replacements but will be less efficient i.e. potentially make the run slower or require you to run a few times to get good RNG. 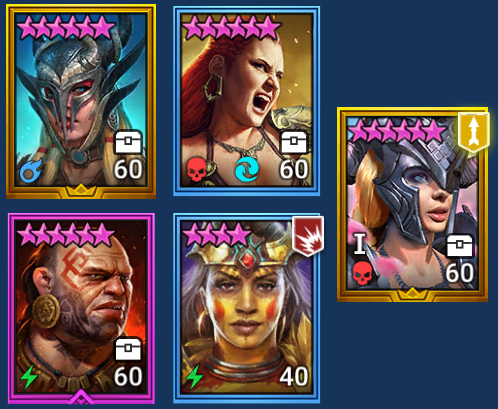 The key to completing this level, will be to control the enemies, due to it being a low-level floor still, the enemies do not have a huge amount of health and won’t be hard to pick off. Prioritize taking out the targets listed above that will keep the rest of the team alive for longer.

Scyl of the Drakes – Scyl is absolutely amazing here for her control, healing and of course her revive in case things go sideways, She is also free for everyone which makes her even better!

Soulbond Bowyer – Due to her being easily accessible due to her rarity, Soulbond is a great option for this and for Faction Wars – with her A1 AOE ability you’ll be able to utilize a stun set on her to help keep enemies under control.

Kantra the Cyclone – Kantra is great at controlling Valkyrie’s due to her ability to place block buffs, although it is RNG – Her A1 ability is also a buff strip to remove the shields in the event they do get off.