After completely clearing out duplicate Epics, and Rares that were stacked up other than those we would either use, or that we used in Faction Guardians – it was time to look at what Champions we would be levelling up.

Clearing out the Champion Storage gave us a total of 85 5* Chickens!! Meaning we could create a massive 17 new level 60 Champions.

One thing is for sure, we know Lydia is coming soon on the account, so saving the food to level her is super important as she will slot instantly into many teams, so let’s look at the other Champions we decided to invest in. 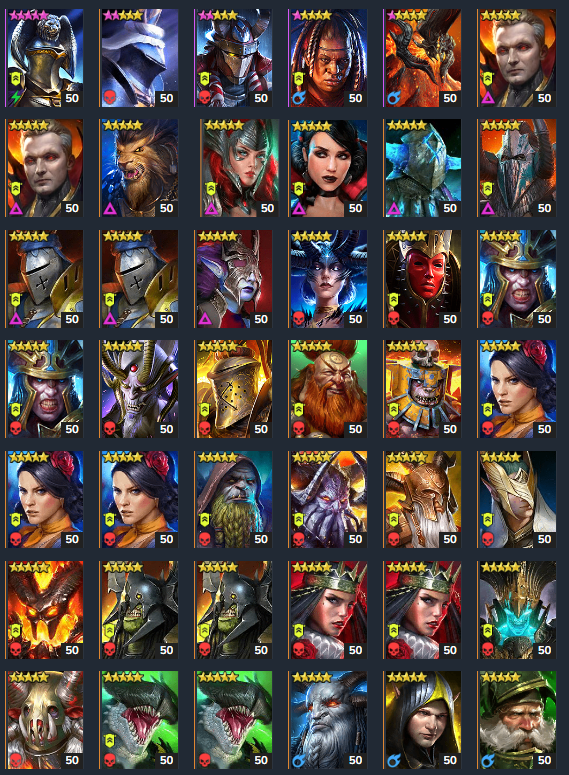 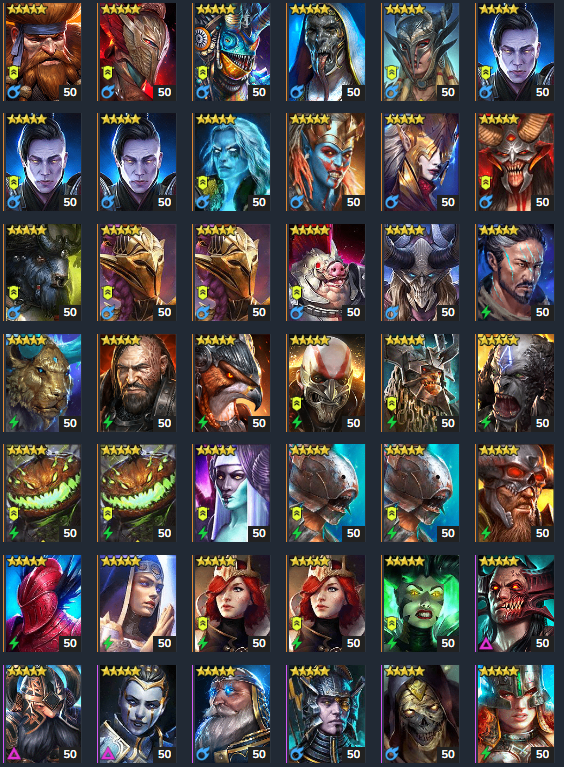 With Knight’s Revenant Faction Wars being one of our very first priorities, it was a no-brainer to level Tomb Lord to 60, as he would make stage 21 immensely easier, but could also prove valuable in both Dragon and Ice Golem going forward.

When looking at Arena Options, we decided it would be fun to run a team with Siphi and 2x Rotos the Lost Groom, so we decided that one of our early investments should in fact be this, as we wanted to get arena up and running ASAP to push back to Gold V rather than chilling in Bronze 1!

We skipped over Kymar initially, as we assumed there would be one at 60 if there was one unlevelled, but in fact he was the only one on the account, so he instantly got levelled up to 60 as he would form a core part of both arena and dungeon/doom tower teams going forwards.

With Duchess being one of the best defensive and supporting Champions in the game, having two of them ready to rock made complete sense to us, allowing us to utilize her in areas of the game such as arena, dungeons, doom tower and hydra without worrying about having a single universal build.

Doom Tower progression is going to be a big part of this accounts progress, and multiple areas of Doom Tower Lyssandra really shines, as well as helping in many other areas of the game such as 3v3 arena.

The best epic in the game just had to be levelled, while we’ve not picked all teams yet, you can be sure we’ll be using Geomancer in both Doom Tower and Hydra down the line.

Another key part of Doom Tower that we simply had to level, Alure will not only slot into many Doom Tower Teams but also into the Core of our Fire Knight 25 team when the time comes to build it. We may even end up levelling a 2nd!

Vogoth is an incredibly valuable defensive champion to have in your roster, whether it be for arena defense, or even for Doom Tower on fights such as Bommel, he can really make things easier to work through, this boy will certainly get his fair share of gametime.

While Royal Guard has seen a drop off in use since the changes to Stage 21-25 Dungeons, he remains incredibly valuable for wave clearing on Dragon 24, Fire Knight 25 and also very valuable in Hydra Clan Boss.

Archmage is one of the best options to use in a Seer team as a buffer, while also providing control against the enemies, this will especially prove to be valuable in Doom Tower Hard waves, keeping enemies locked out while we cycle through Cooldowns.

We made the decision very early to run with a Myth-Fu clan boss team, we had all relevant champions ready to rock, but no Heiress – so we had to farm one in order to get her levelled up ready to build our brand-new clan boss team!

Back to the subject of Arena, especially 3v3 – Leorius gave us more options for building both offense and defense teams as he shines in both areas, allowing us to ensure we have offensive options in all of our teams to keep a win condition.

Wythir was another champion we considered for Arena Defense, because her healing is truly outstanding making her very annoying to go against, while we progress through the tiers of 3v3 up to atleast Gold 1 overtime for Ramantu missions, Wythir will be a core part of our defensive setups.

While this may seem like a strange one due to the wide array of Legendaries we have available, nobody does it quite like Stag Knight, and that will come in handy in Hydra Clan Boss especially, he will find a home in one of our 3 teams each week, and likely in other areas of the game too.

Picking our final Champion was slightly forced upon us, as we needed to ensure we could survive Shadowkin 21 without losing any team members, which you’ll see more of in our next update, but Toragi is one of the best ally protection champions in the game, and thus – we took him to 60!

Stay tuned for our next update where we’ll be tackling the remainder of Faction Wars to get our hands on Lydia the Deathsiren!