Before we get into the nitty-gritty of building a good solid speed farming team for the Fire Knight, I want to give you an update on how we are getting on the with the account.

Spider: Spider is still going well, no changes there. I try to spend at least one day a week in here to build up the silver again

Dragon: We’ve been working overtime in Dragon at the moment due to the need for Speed gear, and we are getting some nice pieces.

The Big update is in the Arena! WE ARE BACK INTO GOLD V. That took a while but we finally got there, and we don’t plan to leave again.

Clan Boss: We finally got Heiress into toxic gear, and it has worked wonders we got our first one key on Ultra Nightmare!

Now that’s the updates done on to the Fire Knight!

Since we have a poison exploder team for the Dragon Dungeon, I wanted to build a Seer team to show what she can do! The only problem with Seer is normally she requires a lot of Crit Damage up to and over 300% which for this account and many of you these numbers are not accessible. So, I had to think outside the box. Into the Optimiser, I went and set these filters for Fire Knight 25 teams

I sorted by the number of battles. 97%-win rate not 100% as that magical 3% comes into play, max duration 2 mins, with max number of battles, and after looking through the teams and ignoring the ones that had really high Crit Damage on Seer, I found this team:

4.2k battles with a 99.86%-win rate and under two minutes. That will do nicely. The even better thing about this is, that this is the exact team I run on my own account and it’s the same team that a few of us here at HH Gaming use too.

I clicked on View Variation and sorted my Lowest Maximum Speed. Speed is the other big issue with these teams so if I can find one that isn’t too taxing on my gear then I’m going for it.

If you’re a premium member of the website you can click on view full details and it shows you the full breakdown of the champions, their stats, masteries what gear they are wearing and even the AI setup

Funnily enough, this is my actual team. So basically, in a happy accident, I will be building a Fire Knight team for this account copying my own team!

The most important thing to see here is Renegade is in shield set – this is required. As it’s an extra buff for Seer to rip off and Kreela is in reflex, the reflex is not essential, but it is recommended to make runs more consistent. The other thing I will note here is that you don’t need these exact stats just go with a ballpark. I have Lydia built this way as I use her in high-end Doom Tower hard and Hydra

I then copied to Optimiser and went into each champion selecting optimisation goals, I chose survivability for Lydia and Alure

Damage for Kreela and Seer (with a focus on Karma Burn)

and setting the accuracy needed to the recommended stats for each.

Before I optimise the build, we want to make sure the hardest-to-build champs get done first so I changed the order to this. As Seer, Alure and Lydia are the hardest to build due to their speed and damage

As Lydia is going to be used everywhere I wanted to build her the best I can and that is tanky with plenty of accuracy. 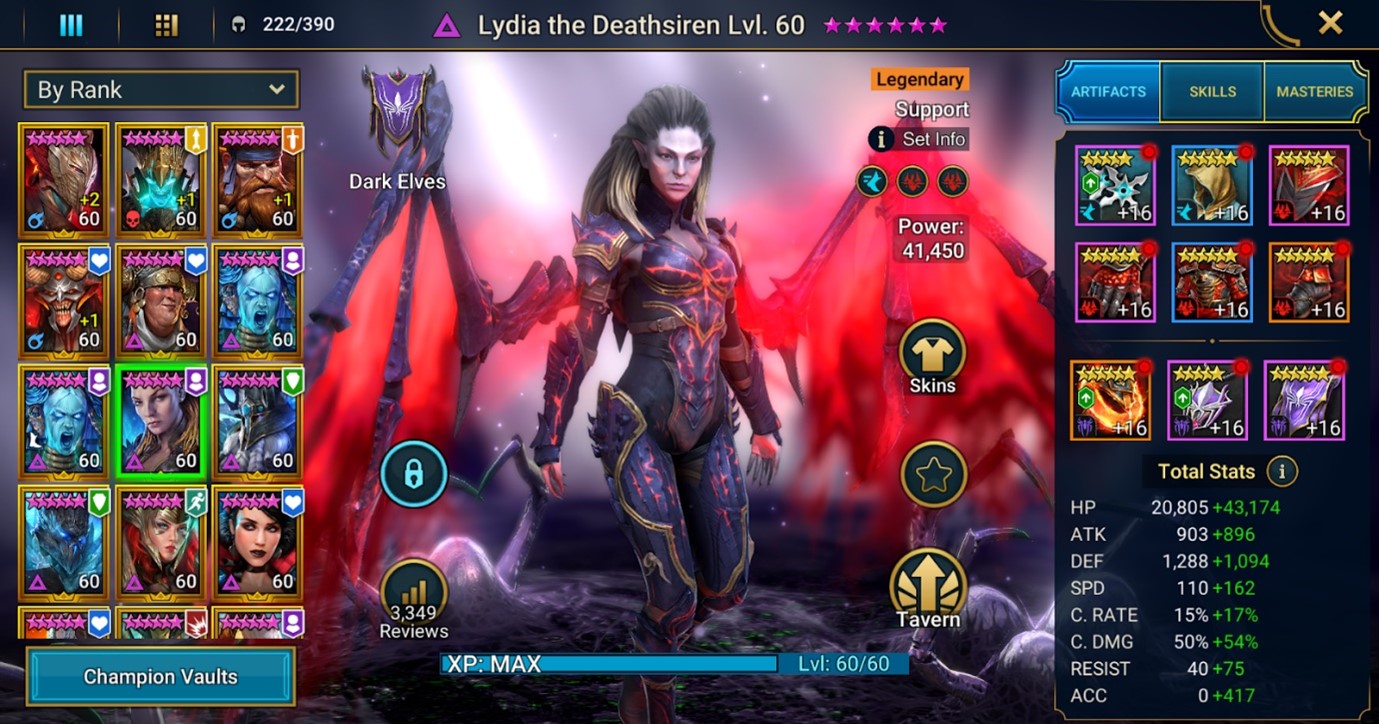 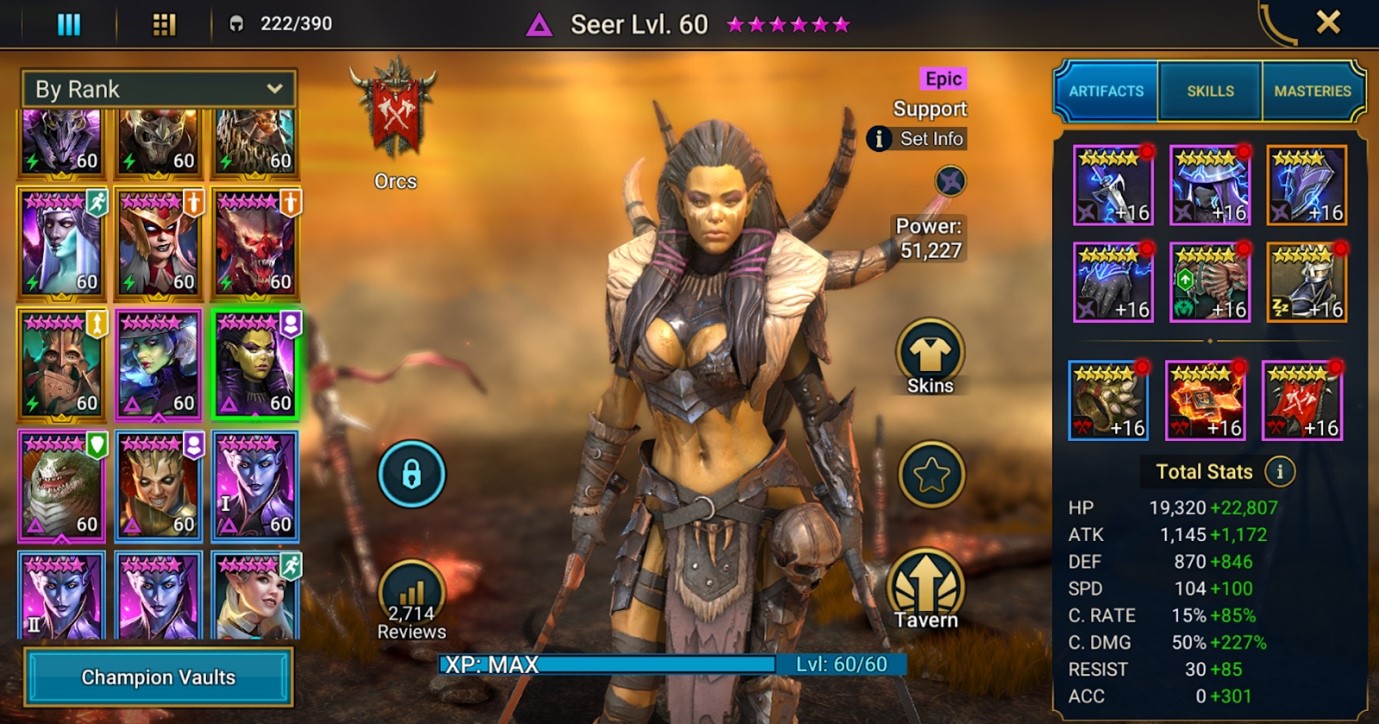 Unfortunately, I couldn’t get the damage numbers I wanted in Reflex, so that’s something to work towards in the future. But this build will work nicely. 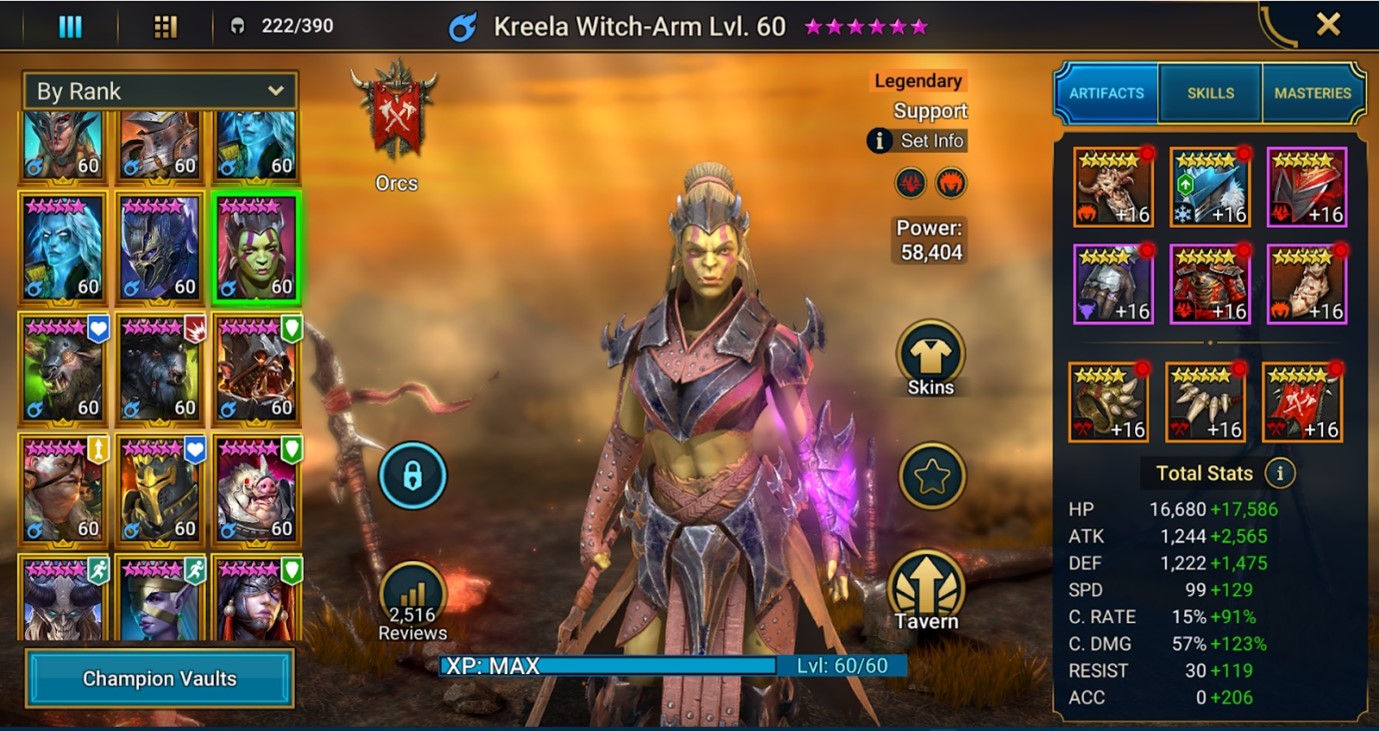 Speed, Crit Rate, and accuracy Are all she needs 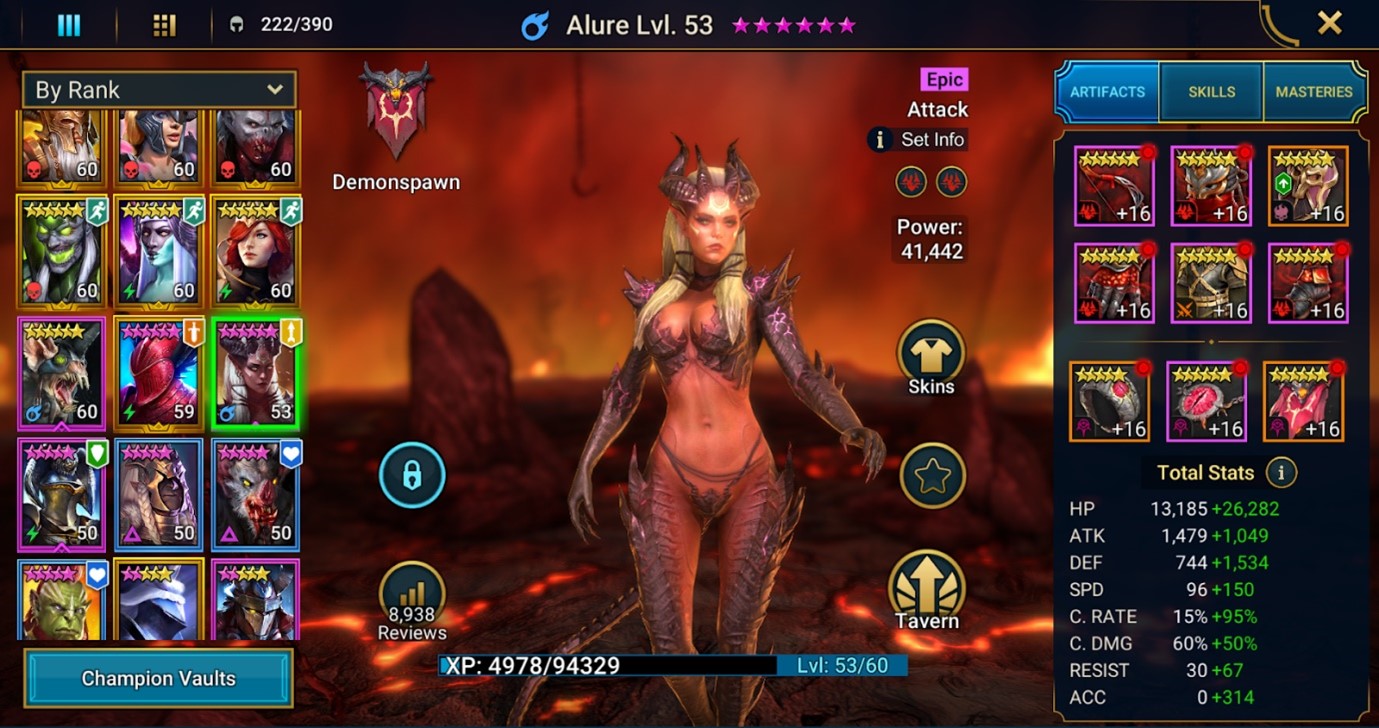 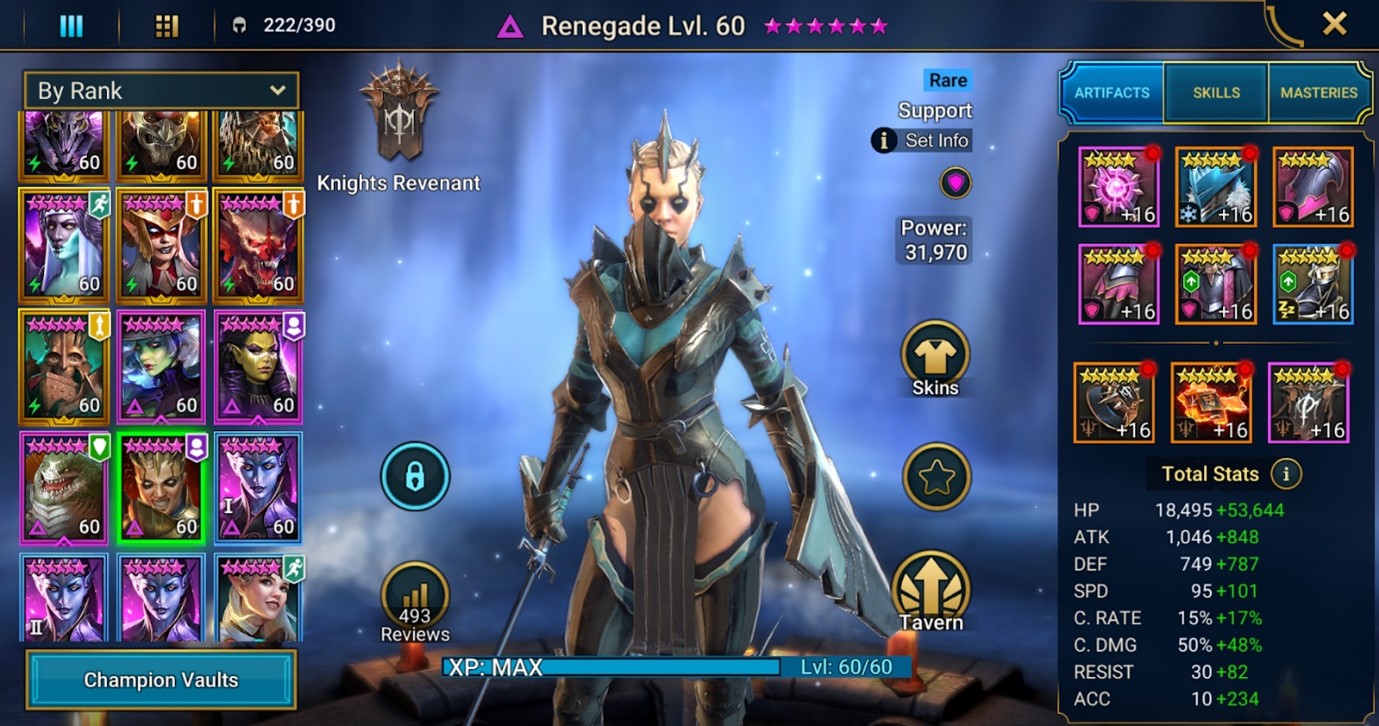 Once you have the champions built its time to get the AI settings right, these are important to do as we need everyone to do their jobs at the right time. Turning off Kreela’s Blinding glow on round 2 enables you to have Ally Attack ready for the first hits on the boss and taking that shield down. The same with Alure we only want her to use her A1 and keep that turn Meter down on the boss fight. Seer will sometimes use her A2 instead of her A3 so making sure she does the A3 is a must, and we want renegade to use her A3 as soon as possible to get Decrease Speed up to slow down the Fire Knight.

Everything is set and all that’s left is to do a run and this is the result. I am delighted with it. 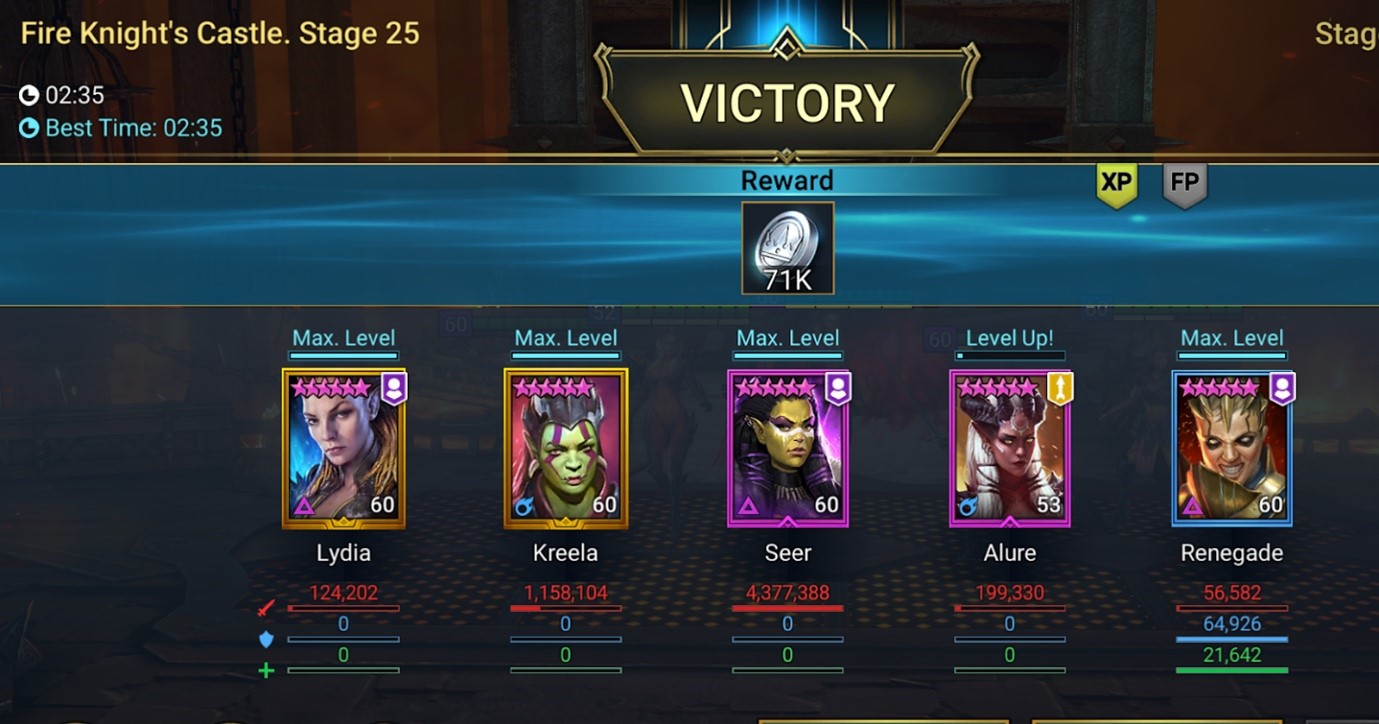 The result, even though it was a great one and I knew it would work, it is not a sub-2-minute run nevertheless in regard to speed farming it’s a start. The great hall and faction guardians are really lacking on this account and in time we will get that time under 2 minutes

One of the issues I had while building this team is the speeds of Seer and Kreela. Since Seer has the mastery Whirlwind of Death that increases a champion’s speed by 18 after killing enemies, this made her outrun Kreela on wave 2. It’s an easy mistake and it’s a quick fix. I just made sure Kreela was 19 speed faster than Seer and it’s synced in like a glove!

The is an awesome Fire Knight 25 Team and it will be very unlikely we will change it in the near future as I have run it for 20 runs and it hasn’t failed once, and that’s it.

next up is the dreaded Ice Golem. I Hate that dungeon, but we need to do it to get better Reflex gear!

Do you use this team? Are you enjoying the Series? Let us know down Below, we love hearing from you!