When it comes to battling the Hydra Clan boss, every rotation brings a unique challenge. The affinities of the heads change, as do the heads in the starting rotation. It’s important to keep in mind that the higher level you hit, the less likely the same heads will pop back up. Higher levels require you to prepare for all 6 heads, not just the starting rotation. However, you can get by on lower levels if you don’t mind resetting and playing the RNG game if you focus on counteracting just the starting heads of a current rotation. For this guide, we’ll also talk about how the affinities affect your team choices. Refer to our Stages Tool for each rotation if you’re looking to prepare your teams

If you’re hitting Nightmare or Brutal, you’ll certainly need to prepare for all 6 heads. However, let’s assume you’re just focusing on Normal level (or willing to go for RNG strategy for Hard) and take a look mainly at the starting heads. For Rotation 3, the starting heads are Decay, Blight, Suffering and Wrath.

Luckily, this rotation does not include Torment or Mischief in the starting lineup. This means you can hope to worry less about a “mischief target” and leave out Shamael or a Perfect Veil champion for Torment’s constant Fear/True Fear debuffs. (Again, it should be stressed that for the BEST success with hydra, you should prepare for these as well to reduce the RNG stressing about which head will pop up after decapitation).

When talking about counteracting each head, making sure you have champions that aren’t weak affinity for that role is important. The Head of Decay is Spirit affinity. For this rotation, you’ll want to pick a Provoke champion (or two) that are not Force affinity to avoid weak hits and the debuff not landing (Maybe bench those Husks!). Both the Head of Blight and Wrath are also Spirit affinity. In this case, you might want to avoid a Force champion for relying on Block Buffs to land. With a Spirit-heavy starting lineup and heavy hitter like Wrath, you might want to avoid too many Force champions overall (except Geomancer). The Head of Suffering is Magic affinity for this rotation, this plays a little less importance in your decisions but should have your bases covered for Block Buffs like the others.

If you’re preparing well and planning to counteract all 6 heads, keep in mind that the Head of Torment is Force and the Head of Mischief is Magic. This overly doesn’t affect the other decisions made based on affinity though.

Keep in mind affinity does not matter when champion skills place vs hit. If the skill is a hit, you can get a weak hit with negative affinity and debuffs cannot land on weak hits. If you’re placing a debuff, affinity doesn’t matter as there’s no concern for a “weak hit”.

MVPs of this Rotation

Uugo + Lydia – This combination is strong! Between the two champions, you have double protection to land Block Buffs given the different affinities. Lydia is great for any hydra rotation – adding in the Increase SPD, Decrease DEF, Weaken are key. She also brings a single-target Block Buffs debuff that can help keep it up if any fail to land or fall off from Uugo.

Acrizia & Royal Guard – This might be the rotation where you let the Husks take a break and let someone else pump out the main damage. Acrizia is top tier for Hydra damage no matter the affinity. Royal Guard is strong for the majority of the starting affinities so also a great candidate. If you give him accuracy he can also help keep up Decrease DEF and Decrease SPD. 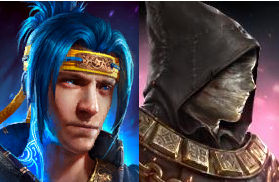 Ninja & Mordecai – Ninja brings damage + HP burns. He’s a strong affinity against Mischief so helpful for getting out devoured heads. Mordecai places HP burns so affinity never matters. This is super helpful against the Head of Blight if you don’t have Block Buffs. HP Burn prevents all hits from being weak hits if Poison Cloud is on any heads. It should be noted that HP burn is especially effective for damage in lower levels of hydra but does fall off and get outscaled by others at high levels.

Krisk, Soulless, Khoronar & Marichka – The simple fact of void affinity makes affinity based on rotation a non-issue. These champions excel in Hydra. Krisk has a very diverse kits and covers most of the bases needed for beating hydra. Soulless and Khoronar are strong provokers that also bring more to the fight and make them worthy of every rotation, especially if the Head of Decay is in the starting lineup. Marichka is a newer champion that is insane for hydra, bringing amazing support and even restoring the Max HP that the Head of Decay may remove.